To support Sky’s renewed commitment to delivering world-class sport, New Zealand’s Home Of Sport has upped the ante on its new Life Needs More Sport platform, releasing three hilarious new TV spots and a series of out of home executions created by DDB New Zealand, to remind Kiwis that adding sport to life makes it that little bit better.

The spots were brought to life by Scoundrel’s award-winning director, Ric Cantor, and the out-of-home by photographer Stephen Langdon. Both continue the theme of the campaign, putting a humorous sporting spin on everyday situations and reminding Kiwis that Sky is New Zealand’s true home of sporting content.

The three new spots launch Sky Sports Now, a new streaming service that offers access to all 12 Sky Sport and ESPN channels, making sport more accessible to New Zealanders than ever before.


One spot features the ejection from a meeting room of a flatulent employee, whose attempt to cover up his faux pas is exposed by HotSpot, technology that’s more usually used in cricket coverage to detect contact between ball and bat. Another shows a wedding guest putting his foot in it and being sent to the sin bin by his exasperated wife. And the third features a thirty-something man, who still lives with his parents, being traded by his Mum and Dad for a labradoodle. As with the initial spots, voiceover is provided by Sky Sport’s commentator Ian Smith.

Carrying on the theme of injecting the quirks and quandries of sport into some of life’s more moribund moments, the new out-of-home executions are inspired by a range of wonderfully awkward family portraits – but with the baby in each case being swapped out for a basketball, a rugby ball and a football. 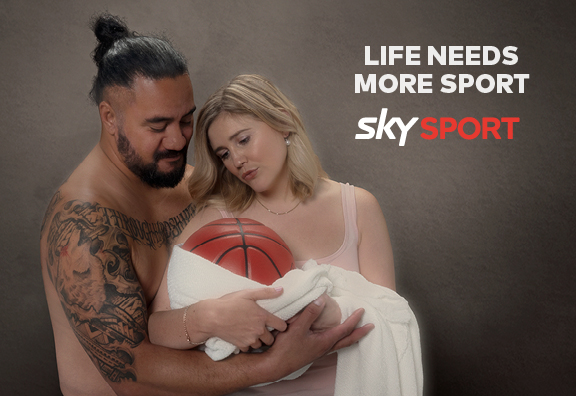 Chris Willingham, DDB New Zealand’s managing director, is delighted to see the Life Needs More Sport campaign delivering another round of executions: “In a matter of months, the new management team at Sky has reinvigorated its sports offering in a way that’s hugely exciting. ‘Life Needs More Sport’ gives us a great platform to take that message out to New Zealanders and to reinforce Sky’s position as the Home of Sport.”

Steve Bayliss, Sky’s chief marketing officer, says the latest creative work demonstrates the potential longevity and flexibility of the platform the team have created: “Our customers have responded very positively to our revamped sports line-up so far and the ‘Life Needs More Sport’ campaign has played a key role in that. The latest round of work is further evidence of the great storytelling opportunities it provides.”