The story behind award winning creative Kent Brigg’s (pictured above) latest achievement, all started over 30 years ago in Rotorua, with a circus poodle and a lion escape.

On the morning of January 30th 1986, Lucy the poodle met a sad end at the hands of a suspected saboteur and a pride of lions at the Whirling Brothers Circus. Later that day, Kent and his brother Gareth witnessed those very same well fed lions escape, mid performance and into a crowded lakefront. The unlikely event was forever seared into Briggs’ memory. Flash forward to September 2020 and “Who Killed Lucy the Poodle?” Briggs’ documentary series investigating the surreal hullabaloo, has just picked up the top award at the Melbourne WebFest in the Non-Fiction category.

The 7 part series screened on TV One and TVNZ OnDemand last year and was met with critical acclaim, with the spinoff calling it an “Absolute gem of a series” and Seven Sharp’s Hillary Barry praising it as “One of the best you’ll ever see”. The show follows Briggs in a cold case style murder investigation, as he endeavours to track down the culprit for Lucy’s grizzly death. Having received a nomination for Best Non Fiction earlier this year at the Berlin Seriale Festival, WKLP could still pick up another Gong at the Starable Fest in New York.

Says Briggs: “It’s a testament to the excellent people who featured both on screen and behind the scenes, especially the late Tony Ratcliffe; who only recently passed away. Despite being a controversial character, he was a living legend and a lot of this doco delves into the world he inhabited in the 70s and 80s. They were different times, sometimes brutal but always exciting; and in a lot of ways this doco is a love letter to a bygone era… as well as a poodle murder investigation.” 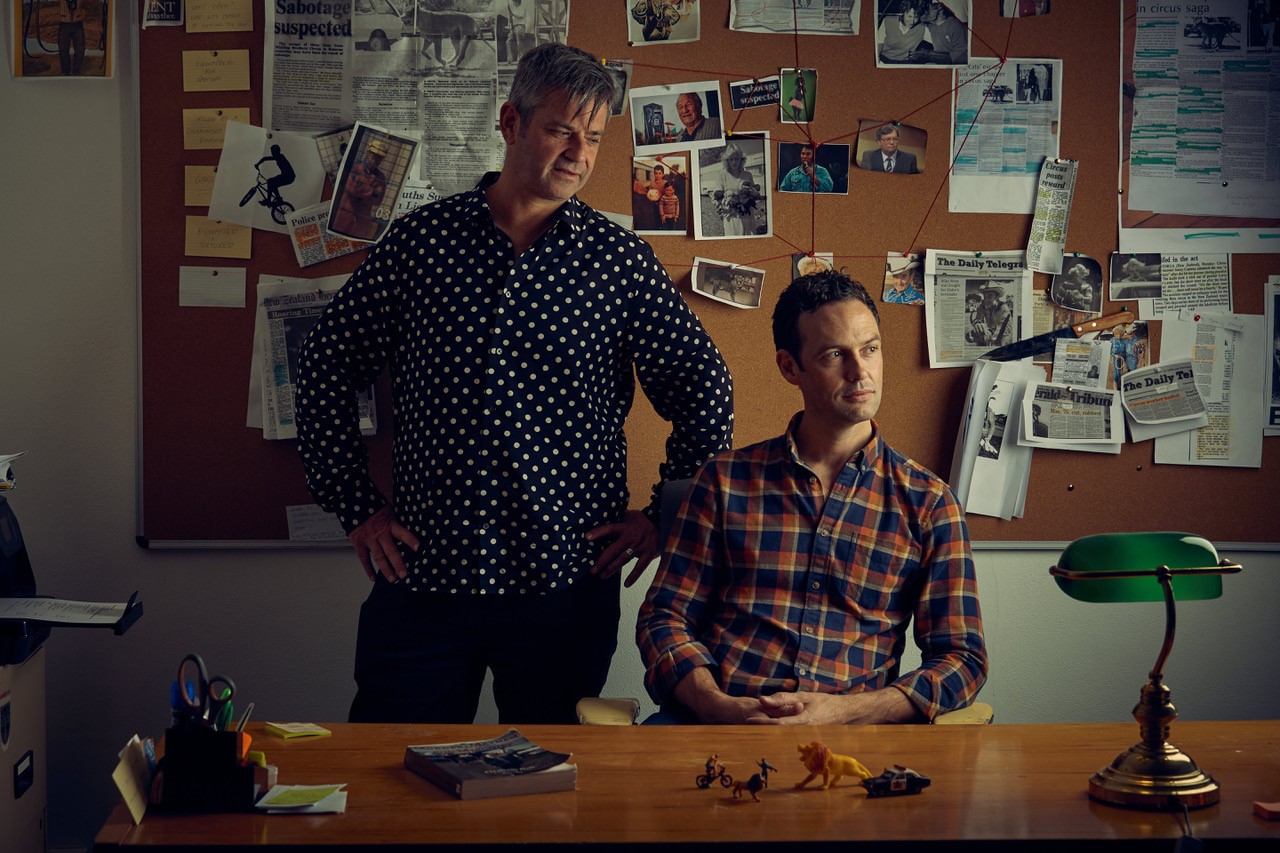 A steady fixture in the Ogilvy / Stanley St creative department under CCO Regan Gafton, Briggs has been moonlighting as an ad creative and a writer / director with his mate and producer Orlando Stewart (above left), for the past 2 years. Stewart, the recipient of the 2019 SPADA Independent Producer of the Year award for his work on WKLP and feature film “Bellbird”, was key to the documentary’s success.

Says Briggs: “Along with being incredibly supportive and generous, Orlando has a real knack for bringing the right people together to nail a project. Plus, he’s always up for a laugh, which is essential really.”

Stewart’s past experience as a writer and onscreen talent helped support Briggs’ transition into his presenting role within the series.

Says Stewart: “From the moment Kent shared this incredible story it was obvious he had something special on his hands, it was equally obvious Kent had to both tell the story and be part of it. I think we were all surprised at how phenomenally good he was. A real natural, he stepped up from day one and knocked it out of the park.”

Having spent a decade as a TV editor and director, Briggs retrained as a creative and says that the skills he’s picked up from working within creative departments, combined with Stewart’s industry experience has definitely given them some “tricks to pull out” when pitching a show.

Says Stewart: “Kent had me hooked within a sentence. A lion escape, the unexplained death of a performing poodle and a sitting Prime Minister seemingly sweeping the incident under the carpet… heck, truth really is stranger than fiction. His skills as an ad creative also meant the package he put together outstripped anything I’d seen pitched for television.”

Grafton along with head of operations Siobhan Burke and agency owner Greg Partington were all supportive of Briggs moving image pursuits and after the doco-series wrapped up, he returned to Stanley St for another 9 months.

Says Grafton: “Stanley St are super stoked for Kent. We whole heartedly support his Moonlighting ideas and are super proud of his achievements.”

Says Briggs: “The Stanley St whanāu have always been great to me.”

However, the tough decision to leave was made when he and Stewart landed another two series.

“Sextortion” starring Tom Sainsbury and Cohen Holloway, is a six-part comedy series that was released in June this year via TVNZ OnDemand and saw Briggs working as co writer / director with Kyan Krumdieck.

Says Briggs: “We both brought different skills and tastes to the table and I’m really proud of the work we did together on the series. Plus, I think we both learnt heaps.”

However, Stewart and Briggs lost their second 2020 series due to COVID 19: “We had cooked up a game show that we really loved, and it was all greenlit. But regretfully, it was scuttled by the whole global pandemic thing. Them’s the breaks I guess.”

Like many other Kiwi’s, from adversity came opportunity and development went up a notch – with a number of new projects now in an advanced state of development.

Says Briggs: “Rob’s enthusiasm and support has been awesome. He’s got such a wealth of knowledge and his knack for telling dark Kiwi tales is perfect for this project. Finger’s crossed it all ends up on the screen one day.”

Keeping his eye in as an ad creative, Briggs’ currently freelancing with the likes of Young & Shand, along other agencies including some direct clients, but is keen to see others have a crack at something they’re curious or passionate about: “I’d definitely encourage anyone within the ad industry who is looking to branch out, to just go for it. Agencies breed such great thinkers and doers and it’d be cool to see more of them throw their talents into other spaces, and see what they can come up with; then bring those new skills back to the ad world and apply it to a brief. I reckon agencies and clients will be all the better for it.”

The Melbourne WebFest is Australia’s international web series festival, taking place annually from late June until early July. The festival’s mission is to promote and acknowledge the work of innovative storytellers in digital screen production, delivering a curated program for the public to experience some of the best digital series from around the globe.

“Who Killed Lucy the Poodle” and “Sextortion” are both currently available on TVNZ OnDemand.