Toyota New Zealand has released the next phase in its ‘In Crazy We Believe’ campaign supporting Emirates Team New Zealand, created by Saatchi & Saatchi.

The new content features a remake of Gnarls Barkley’s huge hit song ‘Crazy’ by New Zealand recording artist Ladi6. The images that accompany the song are a spectacular combination of existing Emirates Team New Zealand sailing footage, graphics and typography that explain Toyota’s reasoning for backing ‘a bunch of sailors’ for 29 years.

Says Andrew Davis, general manager of marketing for Toyota New Zealand: “Toyota has supported Emirates Team New Zealand for 29 years and over that time the team have always had the ability to use Kiwi ingenuity while turning crazy thinking and design into innovative results. For this project we wanted the same and used our partners at Saatchi & Saatchi, the production team and Ladi6 to bring a bit of their crazy magic to life and we couldn’t be more delighted with the result.”

Says Steve Cochran, chief creative officer, Saatchi & Saatchi: “There were a number of factors that influenced this work. The song for starters. It’s a stonker, and we felt privileged that Gnarls and the other writers agreed to let us use it. The ambition of our interpretation by Ladi6 under the direction of Mahuia, was to not lose any of the tempo or groove of the original version but to build on it to make it bigger and more cinematic.

“Expecting people to read words on screen while listening to a song with its own lyrics can be tricky, so we used TV show opening title sequences as an inspiration. Mardo had the idea of subtly paying homage to the original brilliant Gnarls music video, which brought the mirrored symmetry aspect to the visuals. We also needed to use existing footage, which was much the same as other sponsors and media organisations were using, so he wanted to treat it in a way that made it look different and more uniquely ours.”

The video content was created by director and motion graphics artist Mardo of Fish & Clips in collaboration with composer and producer Mahuia Bridgman-Cooper of Franklin Road Studios.

The visual style of the video has also been adopted for an out of home campaign. In partnership with JCDecaux, large format billboards will run dynamic ads with headlines written to respond to Emirates Team New Zealand’s performance as it unfolds from March 6 over the America’s Cup.

Along with 60, 30 and 15 second video edits, radio and out of home, the campaign also includes a full-length version of Crazy by Ladi6 that will feature heavily on music playlists at Cup events and venues during the America’s Cup. 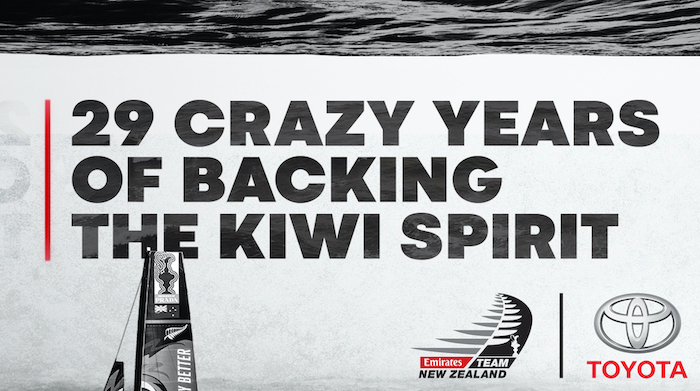