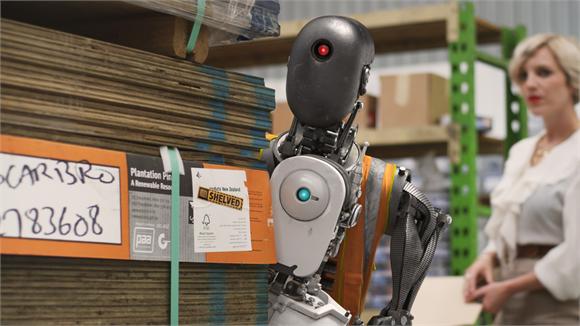 ‘Shelved’ is the story of two bumbling robots who are bored by their dead-end jobs, until they realise they are about to be replaced. The comedy is a nod towards the early films of directors Kevin Smith (Clerks, Mallrats) and Richard Linklater (Slacker, Dazed and Confused) and offers an ironic take on the recession-era redundancies of recent times.

Says James Cunningham, Shelved director and senior 3D lecturer at Media Design School: “Students and industry collaborated to complete the film, with students handling all the special effects, pre-production and helping out with filming on the day. It is important for the students to get a real feel of what it is like to work in the industry, and to get them away from their computer screens and into the fierce pace of working for a live production.”

Shelved stars some of New Zealand’s top comedic talent including lead actors Simon McKinney and Stephen Papps, as well as Penny Ashton and Peter Rowley, all of whom were transformed into fully animated robots by the team of students.

Weta senior concept artist Greg Broadmore (District 9, Lord Of The Rings, King Kong) was also on board with the project, drawing the original robot sketches. It is not the first time he has collaborated with the school. In 2011, Broadmore worked with students to bring his characters to life in the short film Dr Grordbort Presents: The Deadliest Game.

The film will screen at Event Cinemas, Queen Street to a VIP audience including Mayor Len Brown on December 18.