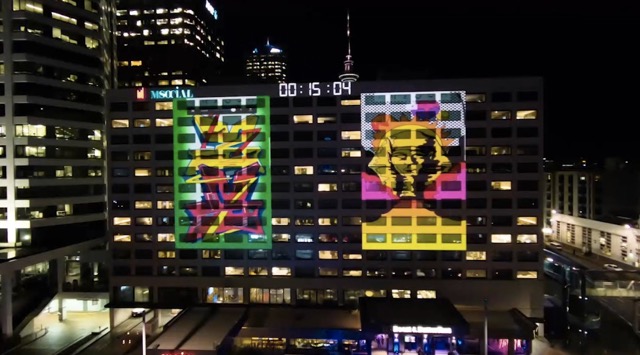 The power of the new Samsung Galaxy Note9 was put to the test last week with an epic nine-story tall art battle, created and executed by Copper Brand Experiences with public relations from Mango Communications.

The stunning spectacle, a New Zealand first, was all in celebration of the general release of the device to the public and used the outside of the M Social Hotel as a canvas.

Two well-known Kiwi artists, Otis Frizzell and Callum Rooney, rose to the challenge of creating three-minute artworks entirely on the Galaxy Note9 – pitching their talents against each other rap-battle style to a live sound track, mixed by Jupiter Project. All artwork by the pair was produced in real-time using the S Pen and was projected directly from the smartphone screen onto the building for the Auckland public to enjoy.

Megan Clark, managing director, Copper Brand Experiences says the goal was to demonstrate the awesome capabilities of the super powerful Galaxy Note9, including its battery life and memory, in an event not experienced by guests and the city before.

Says Clark: “The “art-off” concept was created to show that only Samsung can bring together creativity and innovation at this scale, showcasing the phone’s features and helping Samsung’s customers understand what is possible.”

The evening concluded with a final display of art created by Otis and Callum, which explored their interpretations of power, inspired by the powerful performance features of the Galaxy Note9. Through Samsung’s social media channels, the New Zealand public was able to vote on their favourite work. The winning art by Callum Rooney will now appear on Samsung billboards and advertising in Auckland.