How will New Zealand perform at Cannes this year? In the lead up to the Festival, Campaign Brief will be showcasing the work we hope will impress the judges…

Toyota New Zealand: Nothing’s Changed Except Everything
Saatchi & Saatchi, New Zealand
Being an enduring classic doesn’t mean standing still. For this campaign, we didn’t want to compare the new Corolla to other cars. It plays way too big a role in our lives for that. Instead we compared it to other staples that we can’t imagine life without, like pasta and jeans.

Just like pasta and jeans, Toyota Corolla has been part of the fabric of Kiwi culture for decades, but has now been reimagined. Innovations in safety, emissions, and design plant it firmly in the year 2018. Tastes may have changed over the years, but the love we share for Corolla remains undimmed. Nothing’s changed, except everything. 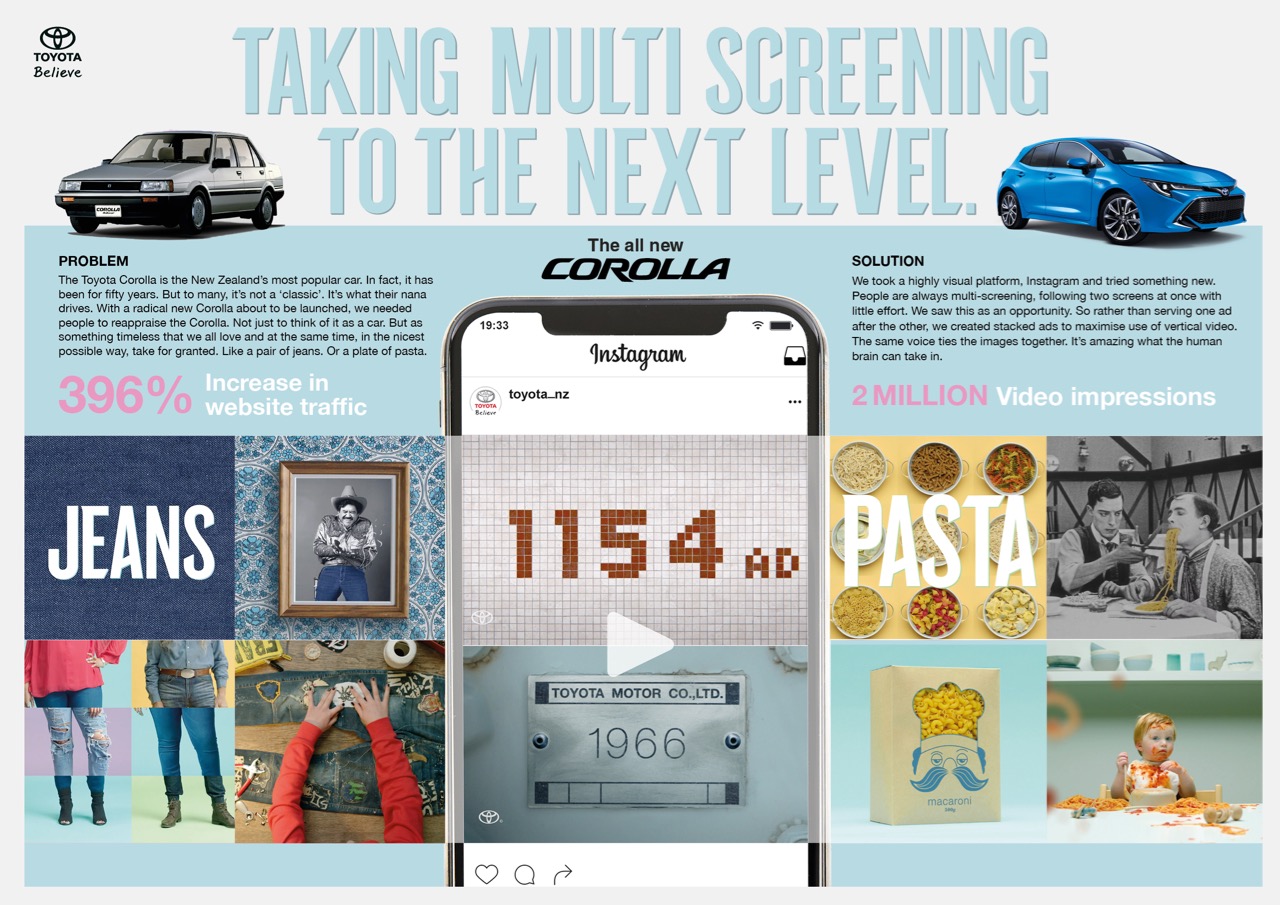 New Zealand Safer Boating Forum: VHF Radio, Salvage
Saatchi & Saatchi, New Zealand
As an island nation New Zealanders have boating in the blood. Everyone’s a ‘boatie’, as we tend to call them. The ability to take to the water is ingrained in our national psyche. But grim statistics show that this very familiarity with the water leads to complacency. Many boaties are stuck in their old ways, or think themselves ‘too experienced’ to get into trouble. Others wrongly believe their mobile phone are a sufficient enough precaution. Despite the fact that incidents often happen outside cellphone coverage and phones are prone to water damage. Incident analysis shows that 58% of boating fatalities fail to carry adequate communications equipment.

Kiwiplates: #Plates
Saatchi & Saatchi, New Zealand
Since establishing in 2017 as the sole provider of personalised plates in New Zealand, KiwiPlates has aimed to give people a platform to share their creativity through our product in order to connect with a new and younger audience; positioning personalised plates as a powerful and positive form of self expression as more and more young New Zealanders are focussed on their personal brand.

With the launch of the new #Plate product, this younger audience was given yet another opportunity to express their creativity, through a personalised plate, in a whole new way. Our objectives were to use this product launch as a way to create further awareness of the KiwiPlates brand and drive 5000 additional visits to kiwiplates.co.nz during the November campaign period to stimulate sales and hit their largest ever monthly revenue target. 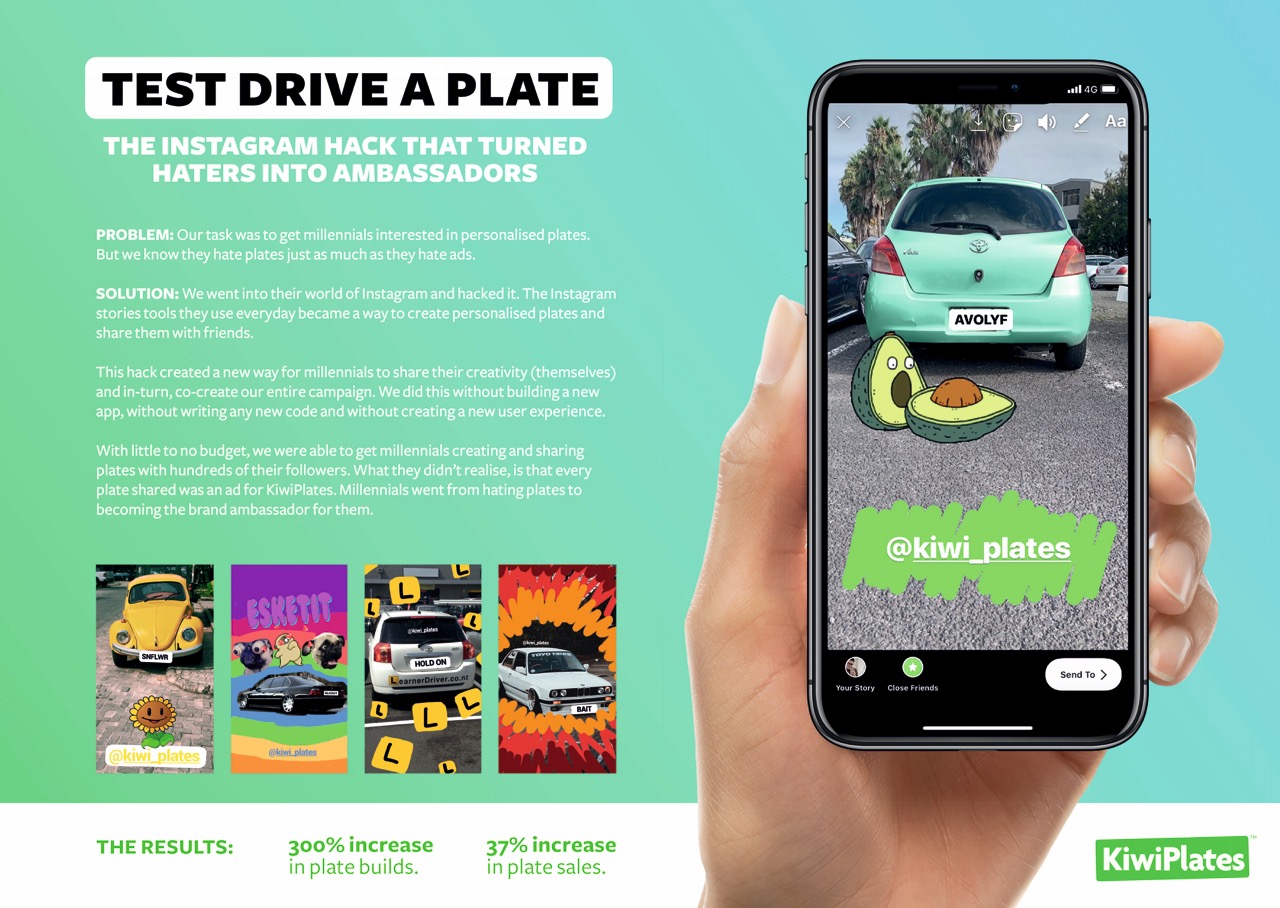 Studies show that companies that have a balanced representation of women in senior leadership positions experience higher revenue, increased growth and generally outperform in their market.

Yet of the businesses that make up New Zealand’s stock market index, there is only one female CEO and only one with a board of directors made up equally of men and women. At senior leadership and management levels this imbalance is also evident.

Champions for Change is an organisation made up of the leading Chairs and CEOs of some of New Zealand’s largest and most influential businesses, who are committed to correcting this imbalance, and advancing inclusion and diversity across all industry and sectors.

They wanted to create a campaign to empower and enable people from all levels of business to not only start a conversation around gender equality, but encourage engagement and participation too. To get people to consider their own decision-making and judgement processes – not just within the Champion businesses, but wider New Zealand, and even the rest of the world. 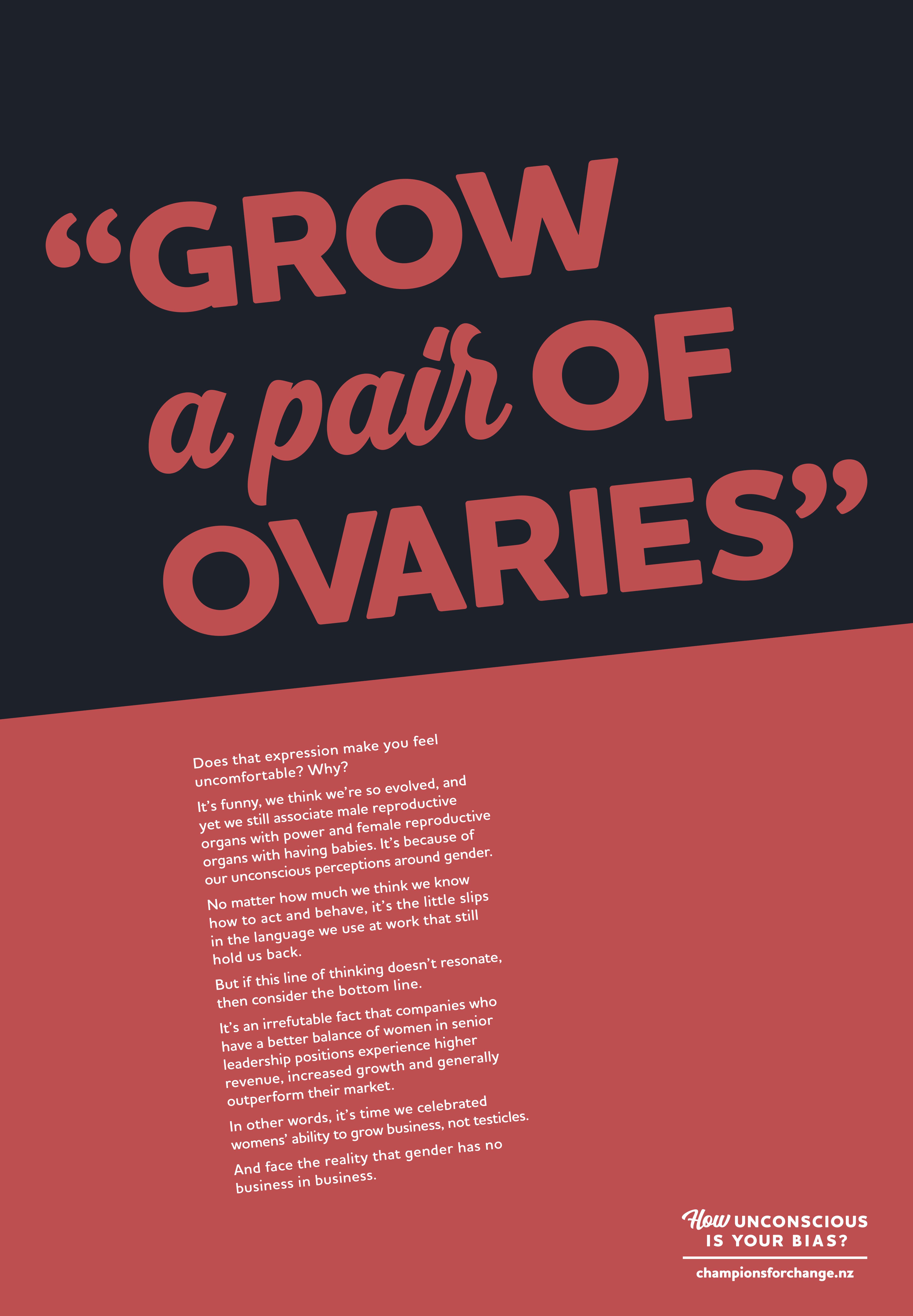 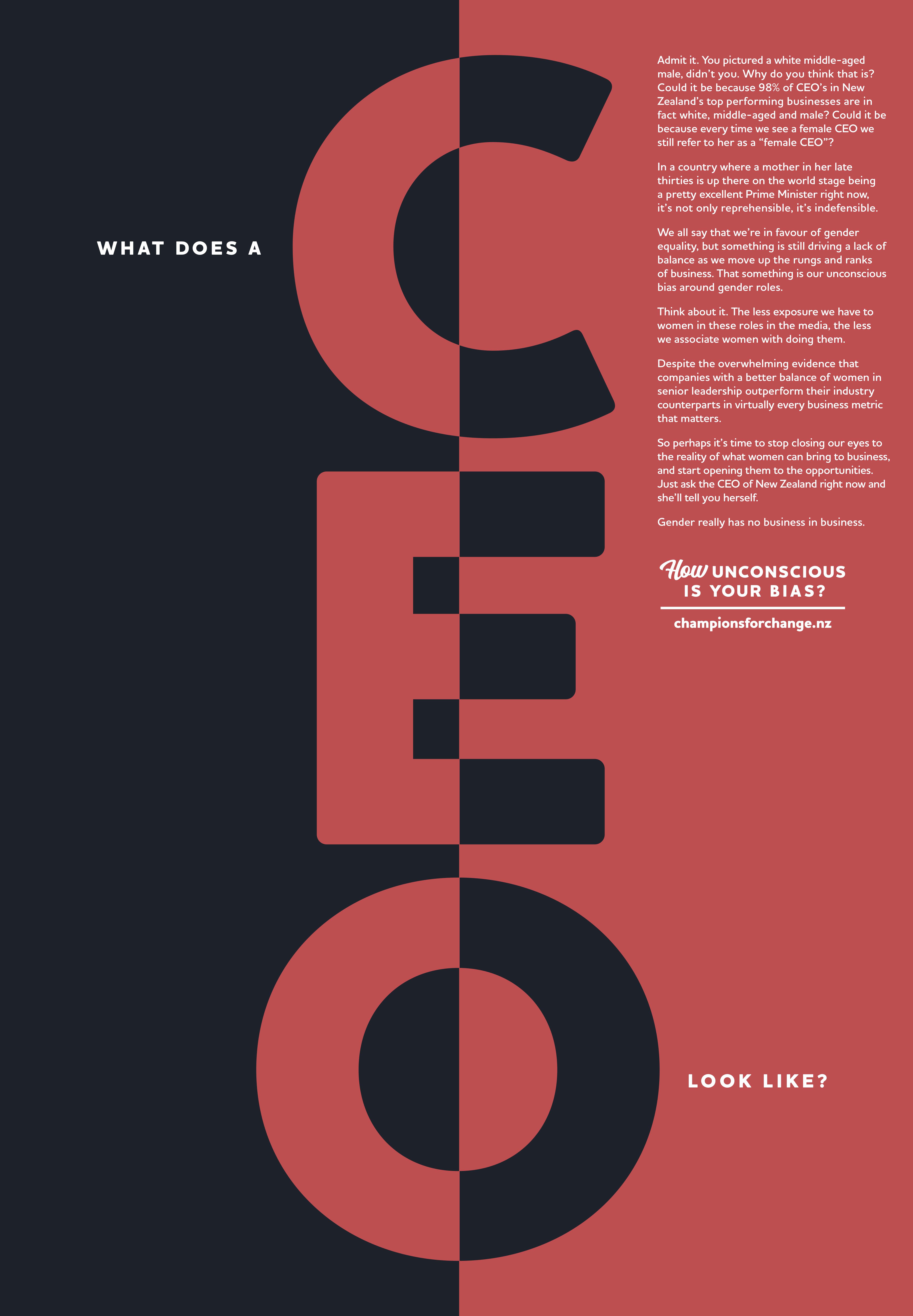 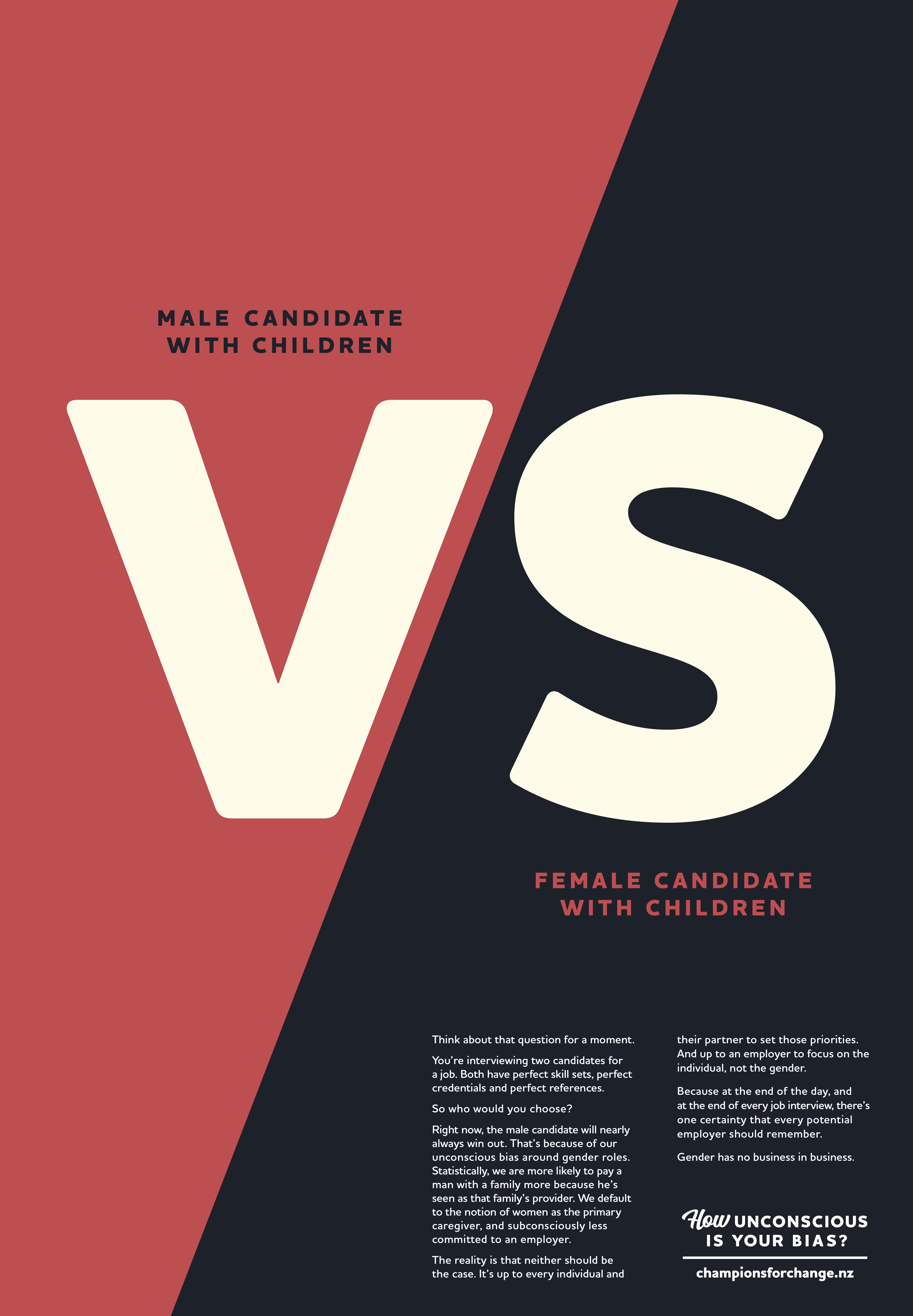