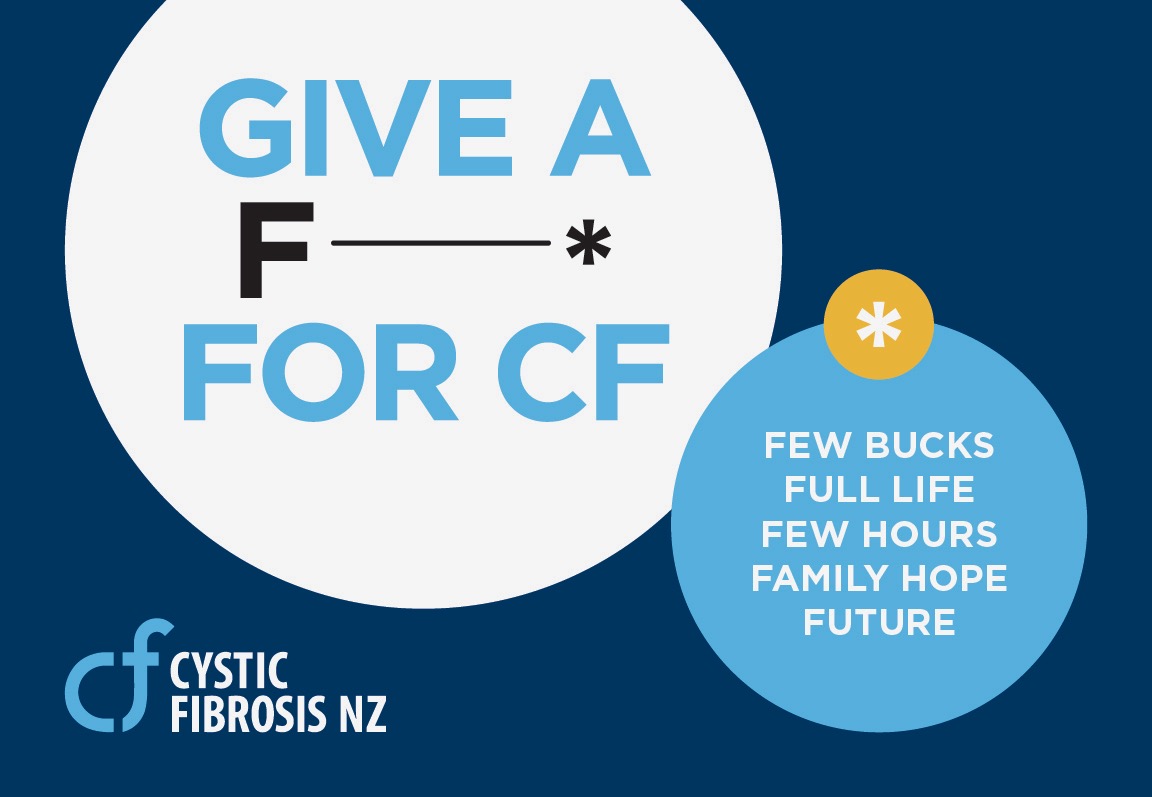 The ‘Give a F—* for CF’ campaign leverages the attention it grabs and uses it as a trojan horse to deliver a very real message about the realities of life with cystic fibrosis.

The campaign aims to challenge apathy and turn heads, in particular appealing to the under 35 age group who were identified in research as the largest proportion of likely donors.

Says Jane Bollard, chief executive, Cystic Fibrosis NZ: “There is some tongue-in-cheek humour to it, and we believe in this day and age, more so than genuine offence. In fact, when we pair the ‘F’ to a genuine way of helping (funding, few hours of volunteer time etc) it actually removes the power of the ‘F word’ as a swear and replaces it with an act of generosity.

“Each ‘F’ allows us to highlight an aspect of what it means to live with cystic fibrosis, educating people about the condition and the work that CFNZ does.

“We believe it brings the reality of the condition home, in small ways that might not have occurred to people before.”

A digital and social campaign will support the usual street appeal and fundraising undertaken by the team at CFNZ and surrounding communities from 12th – 18th August 2019.

Says Adrian Neal, creative director, Central Station: “We’ve worked closely with CFNZ for two years and are very proud and humbled that we can help further their cause and draw attention to the realities of life with cystic fibrosis.

“We hope this campaign will jolt people just enough to appreciate the impact of a life limited by cystic fibrosis and to give a few bucks to help CFNZ continue their work throughout NZ.”

Cystic fibrosis is a genetically inherited condition, which affects the lungs and digestive system. Characterised by thick mucus in the lungs, cystic fibrosis often results in serious chest infections and impacts greatly on the persons quality and length of life.

Donations fund emotional and practical help from dedicated CF social workers, advocacy for the funding of essential medicines, research into new treatments and eventually, a cure. Will you give an F? Text FUTURE to 4462 to donate $3 or visit www.cfnz.org.nz/future for more information.