New Zealand Blood Service has partnered up with Sir Graham Henry for a new blood donation campaign via YoungShand.

New Zealand Blood Service is the sole provider of blood and blood products to the nation’s hospitals. The country requires 3500 donations every week just to meet the current levels, which are set to increase due to demand for plasma. It was this growing demand, combined with the need to carefully manage the influx of new donors that led to the creation of the World’s Biggest Reserve Bench. A recruitment drive to get 100,000 people on the Reserve Bench, so they’re available to donate when the country needs them.

A retired blood donor and someone who knows a thing or two about a strong reserve bench, Sir Graham Henry, calls upon Kiwis to help him fill the most important reserve bench of his career. That’s because every 18 minutes in New Zealand, someone needs blood. For some, it’s the difference between life and death. Every whole blood donation has the potential to save up to three lives and every plasma donation can be turned into 12 life-saving products.

Says Anne Boothroyd, creative director, YoungShand: “As a nation, we’re good at stepping up for each other. But with blood donation, unless you’ve been personally impacted, it’s easy to forget that our hospitals rely entirely on the generosity of donors to do their job. This was a big task that required a disruptive solution. We hope the World’s Biggest Reserve Bench will be just that.”

Says Asuka Burge, national manager marketing and communications, NZ Blood Service: “This year alone we need to collect over 70 tonnes of plasma to meet demand, which is another reason why we need this reserve bench. People who are willing and ready to be called up to donate when it’s required to ensure we can meet current and future demands.”

Says Emma Dalton, client service director, YoungShand: “We have a longstanding relationship with New Zealand Blood Service, but this campaign marks a step-change in our approach as we aim to build our reserve of Kiwis ready and waiting to give blood when it’s needed. The idea was conceived with the knowledge that we need more men to donate. Men are better candidates for donating plasma as they can donate larger volumes of plasma. Currently, men donate 30% less often than women in New Zealand. We do really hope women get on board and sign up too. The more Kiwis we have on the reserve bench, the better.”

Directed by Abigail Greenwood of Finch, with Sound Design by Liquid Studios, viewers are invited into Sir Graham Henry’s territory of Eden Park. However, what we think is Sir Graham’s concern for our boys in black, is quickly revealed as a call to the nation to help him fill a reserve bench of a different kind.

The campaign has launched through PR, fronted by Sir Graham Henry, a 60” online film and 30” TV spot. Each campaign element drives people to the landing page where they can become part of the World’s Biggest Reserve Bench. Designed by the YoungShand team, the landing page brings to life the campaign’s iconic red Reserve Bench, acting as a counter for how the goal of 100,000 registrations is tracking.

Says Scott Maddox, creative director, YoungShand: “It’s great to work on a campaign that has the potential to have such a positive impact on New Zealand’s healthcare system. Everyone who has worked with us, from Sir Graham Henry to our production partners have thrown everything behind the campaign to meet the ambitious goal.”

The campaign will be further supported through a mix of digital and traditional media to keep the campaign top of mind. And Sir Graham Henry will keep Kiwis up-to-date with the progress of the Reserve Bench, so keep your eyes peeled for his updates on social.

Says Tymon Rackley, account director, YoungShand: “It has been a pleasure to collaborate with New Zealand Blood Service to create a piece of work that we are all incredibly proud of.”

Become part of the World’s Biggest Reserve Bench at jointhebench.co.nz. 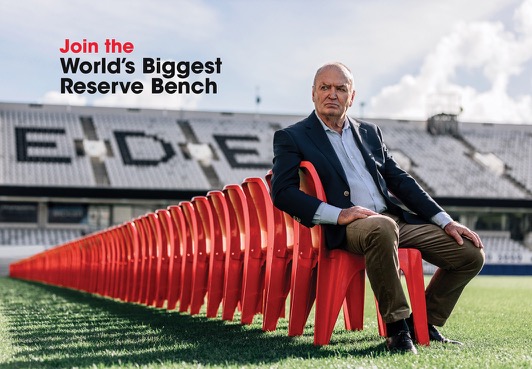