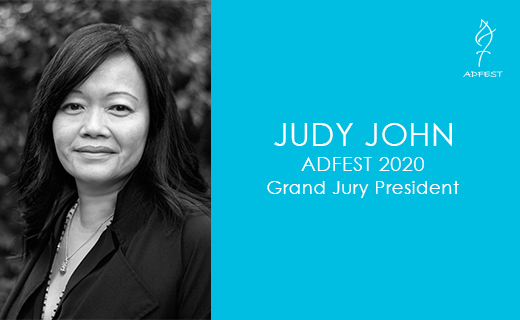 AdFest has appointed Judy John – known as the driving force behind the Always #LikeAGirl campaign – as Grand Jury President of AdFest 2020. John joined Edelman as its first-ever global chief creative officer in April 2019 after 19 years at Leo Burnett, where she was chief creative officer for North America and CEO for Canada.

Says Jimmy Lam, president, AdFest: “It goes without saying that Judy brings formidable credentials to our jury. Not only is she the visionary behind the #LikeAGirl phenomenon, she now sits at the new frontier of earned creative ideas, making her the perfect person to lead our inaugural PR Lotus category.”

In addition to her role as grand jury president, John will lead the eCommerce Lotus, Media Lotus and PR Lotus categories as jury president. PR Lotus is one of two new AdFest Lotus categories, and it’s designed to award work that effectively utilizes PR platforms and channels to increase brand awareness and positively impact reputation.

John ranked as the number one chief creative officer in the world in the 2015 AdAge Awards Report, and made Business Insider’s 30 Most Creative People in Advertising ranking of 2014. In 2019, she was named on Gold House’s A100 List of the most influential Asians in culture. Along the way, she’s won awards at virtually every advertising show – including an Emmy for Outstanding Commercial in 2015.

Says John: “It’s such an honor to be the Grand Jury President of AdFest, one of the most respected creative shows in the region. I’m always inspired by how the community in Asia finds surprisingly creative ways to solve problems and create opportunities for clients. I’m equally excited to be Jury President of AdFest’s inaugural PR category in light of my new role and my passion for ideas that earn attention, change behavior and make us act.”

Based in Toronto, John leads a team of over 600 creatives and planners globally. She is driving the company’s focus on ‘earned creative’ – ideas that are earned at the core, social by design. In life before Leo Burnett, John worked at a mix of independent and multinational agencies including Chiat/Day, Roche & Partners, BBDO, Taxi and Ogilvy.

AdFest 2020 will return from 18th to 21st March 2020 at Peach, Royal Cliff Hotels Group in Pattaya, Thailand. The theme, ‘Fired Up!’, depicts that fire-in-your-belly feeling, which inspires many creative professionals to say their piece and make a difference through the power of creative thinking.

AdFest is one of only eight regional festivals included in the WARC Rankings, successor to The Gunn Report. The festival is now accepting entries to 20 categories in total, including two new categories: Digital Craft Lotus, which celebrates the execution of technological craftsmanship, where design and function enhance the user experience; and PR Lotus.