Talking about mental health continues to be a struggle for many Kiwi men, and while initiatives like ‘A Moment Against Silence’ are doing a great job of raising awareness and changing behaviour, there is still a long way to go.

So this month the Movember Foundation and Dentsu Aegis Network will be running ‘Happy Hour’. But it’s not about cheap drinks, it’s about building routine conversations between men and improving New Zealand’s mental health.

Happy Hour will take place every day from 5pm to 6pm and will encourage blokes to reach out to friends and family. To spend some time talking, pick up the phone, drop someone a text, anything that will facilitate meaningful conversations. And not just because it’s nice, but because strong personal connections have a huge part to play in the fight against depression. 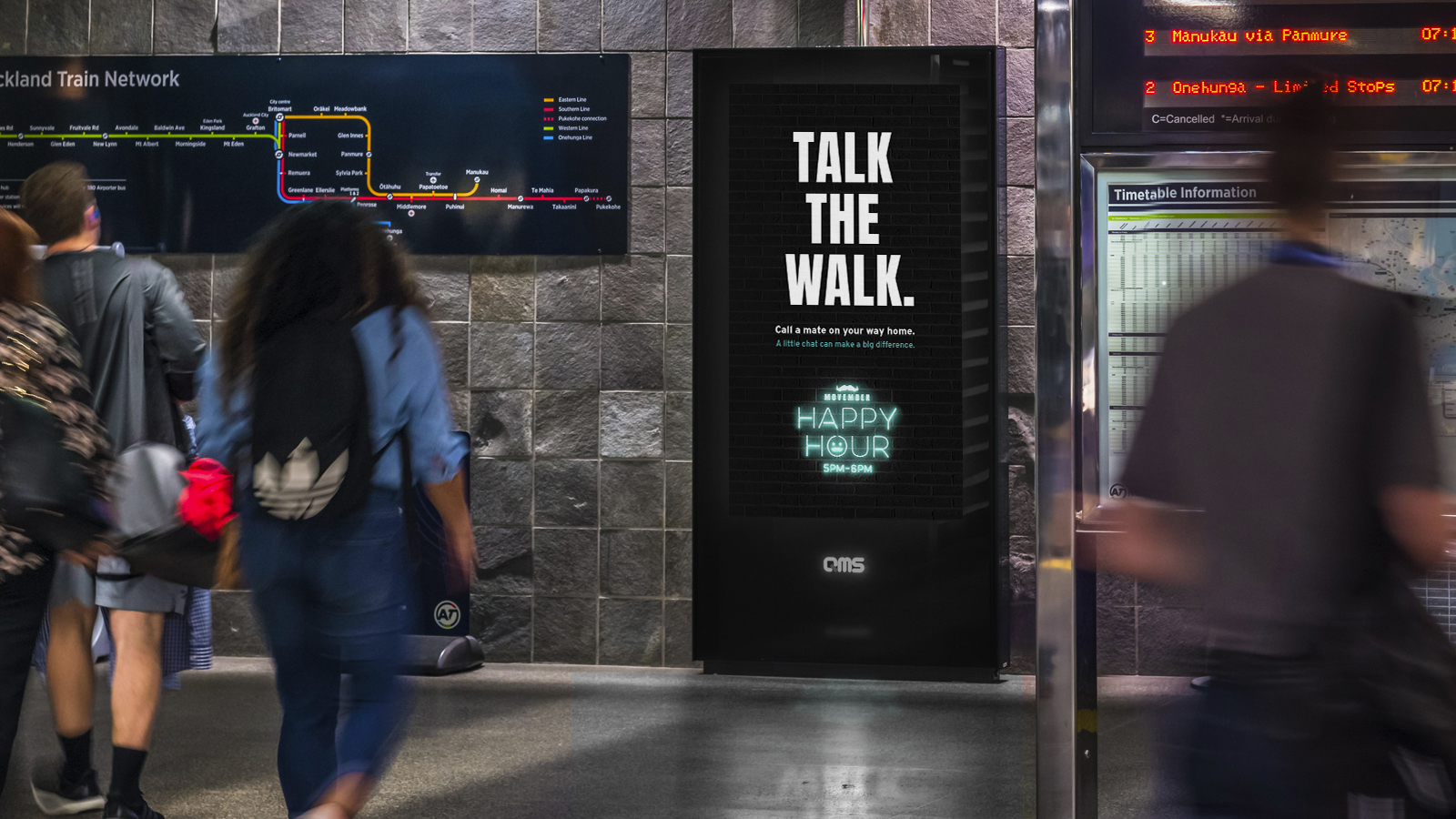 Says Ryan Jordan, strategy director, Dentsu Aegis Network: “When it comes to mental health, we tell each other to ‘soldier on’ or ‘suck it up’, or we just ignore mental health issues altogether because they can be difficult to talk about. But this lack of understanding is causing real harm to our society.

“Men in New Zealand need to use their time more effectively to check in on their mates and let them know that they are there when times are tough. Because a little chat can make a big difference.”

Says Brad Stratton, associate creative director, BC&F Dentsu: “We spend a lot of time trying to reach those who are struggling, but it’s just as important for us to reach those who aren’t. We identified a moment between finishing work and getting home that could be put to better use, whether it’s a chat during a commute or a quick beer after work, it all helps create an environment where men feel comfortable sharing.” 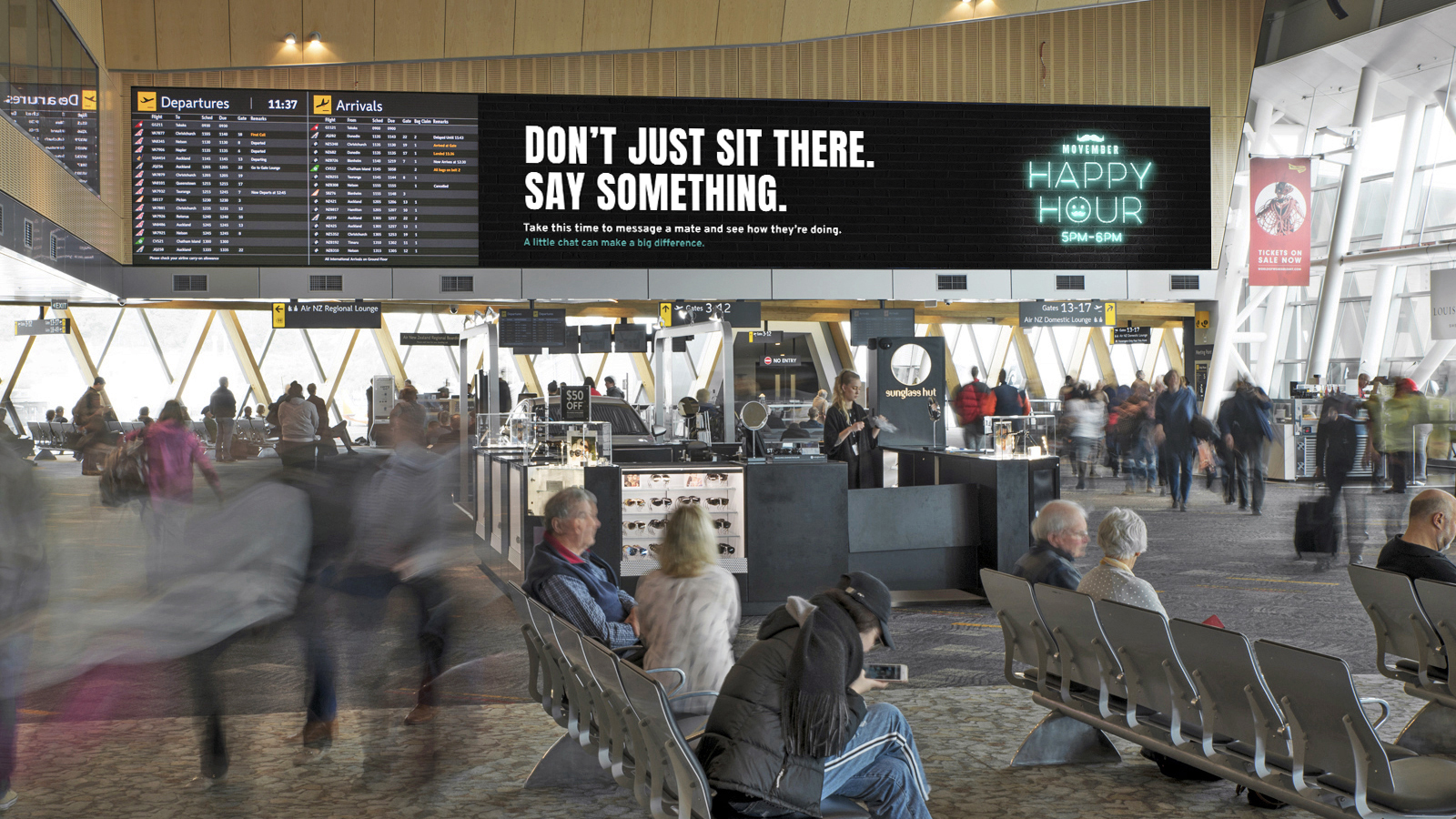 The campaign will be predominantly focussed around the 5-6pm period using broadcast media. The campaign has also received help from of brand partners Lion, Auckland Transport and Spark to help spread the message through their owned and social channels.

Says Kris Hansen, senior brand manager, Lion Breweries: “Speight’s is a proud supporter of Movember. We both stand for looking after your mates and honouring good men – so straight away we thought this was an excellent initiative and were happy to take part. At Lion, we try to share the importance of spending time with workmates, family and friends throughout the year and Happy Hour fits nicely with this.”

Says Teresa Burnett, group manager communications, Auckland Transport: “Auckland Transport supports this campaign as mental health is just as important as physical health. Your commute on train, bus or ferry is an ideal time to check in with a mate and start a conversation. AT will be placing messaging on buses and trains to remind people to get in touch with friends during the ‘happy hour’ and we’ll be actively encouraging our staff to have conversations with mates during Movember.”

Corporations around New Zealand will also be supporting the initiative by allowing their staff off work early during November, so they can enjoy a Happy Hour.

Says Robert Dunne, country manager, The Movember Foundation: “We’re asking Kiwi companies, during November, to relax their official working hours. To let their staff down-tools a little bit early and get involved with Happy Hour. It’s not a lot to ask considering fulltime staff give so much of their life and energy to their jobs already.

“It could be as simple as giving every employee a chance to shoot off early for one day in Movember, or as impactful as changing your business hours to close at 5:00pm for the month – that choice is yours. If less than 1% of businesses in New Zealand gave each employee one hour this month more than 1 million “happy hours” would be donated to the cause.” 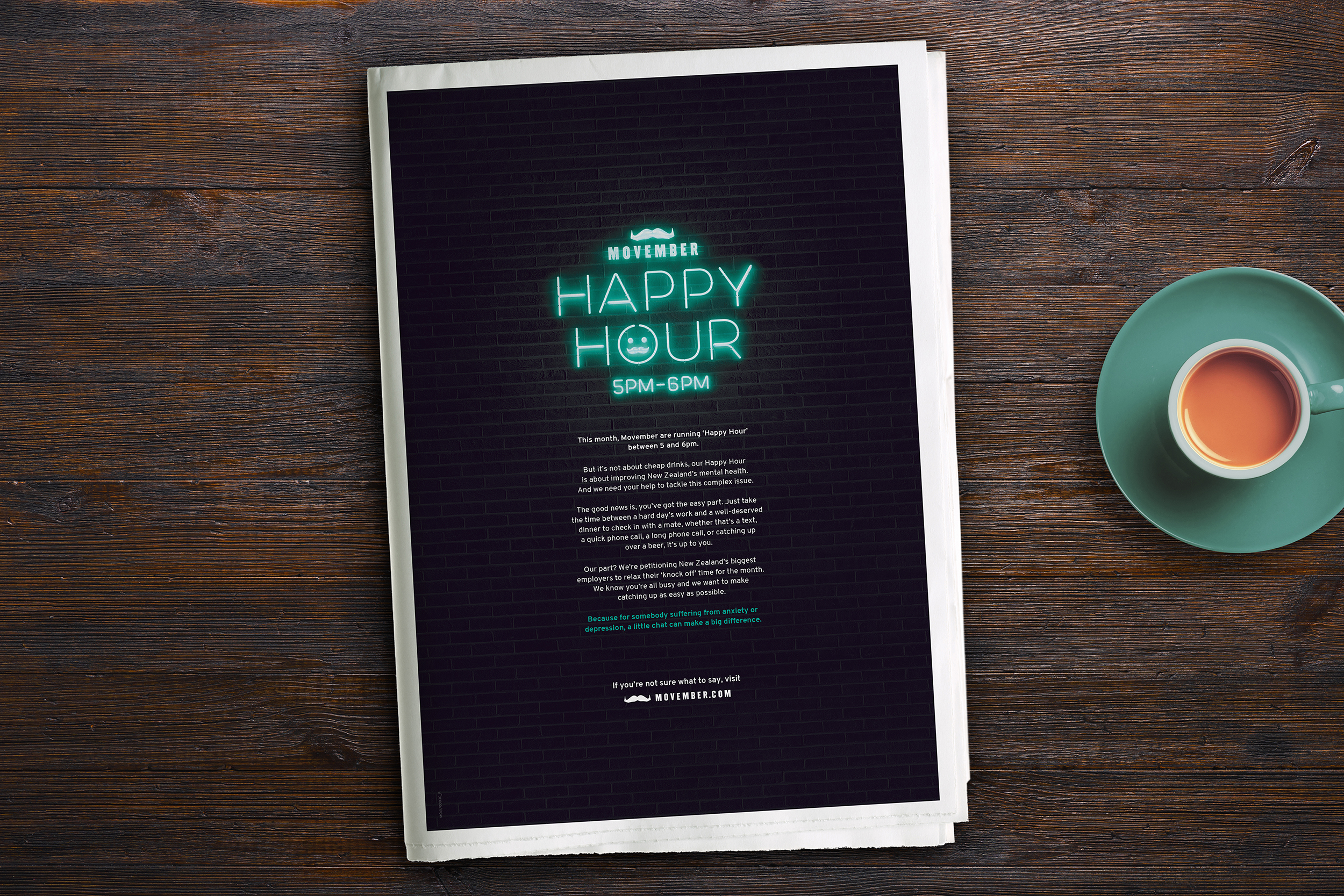