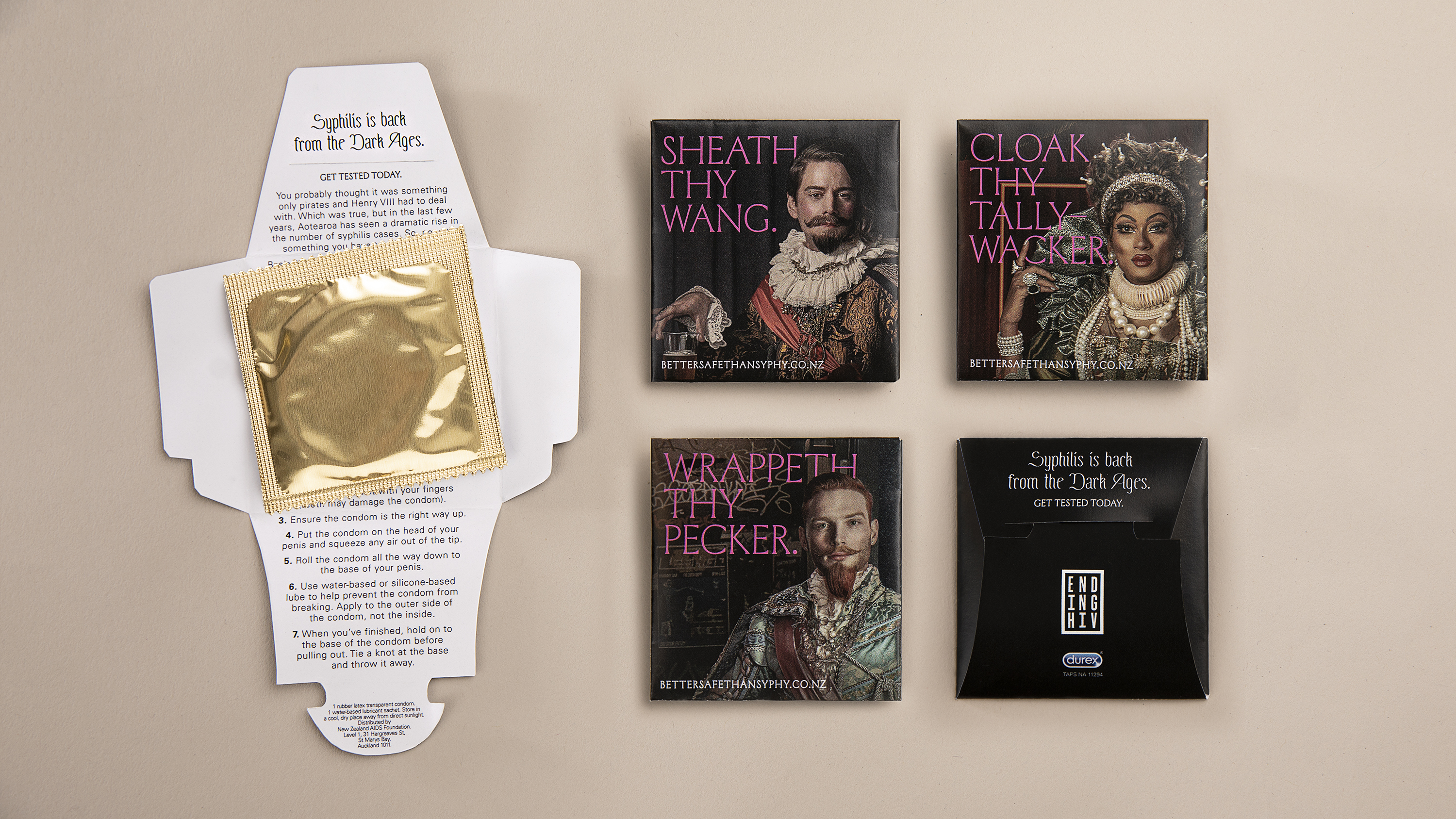 “Syphilis? That’s something from hundreds of years ago, right?” That’s the general reaction when you talk to people about New Zealand’s very real, and very 21st century problem with this archaic sexually transmitted infection (STI).

Syphilis has become such a problem in this country, that it’s now at its highest levels ever. In fact, syphilis diagnoses have increased from approximately 200 in 2014 to over 1,500 last year.    With the help of FCB, the New Zealand AIDS Foundation (NZAF) and Durex are setting out to tackle this problem and put it back where it belongs; in the dark ages.

Says Mickey Power, marketing, communications and fundraising manager, NZAF: “Syphilis is not something many people thought they’d have to worry about in their lifetimes, so there’s a real lack of knowledge about it.

“People are not schooled up on its symptoms, the way its transmitted or how to find out if they have contracted it.

“NZAF is on a mission to end new HIV transmissions in Aotearoa by 2025, which largely affects gay, bisexual and other men who have sex with men. Given 70% of new syphilis cases are also being seen in our communities, we knew we had some work to do increasing knowledge and testing to help keep them safer and bring those new diagnosis numbers down.”

The campaign task is to educate, and that reaction of, “Really? Syphilis is still a thing?” became the insight.   The campaign focuses on creating a “clash of eras”. We took modern hook-up language and situations, and inserted a character out of time – someone in 16thcentury garb, looking to proposition partners. Modern pick-up lines, such as “Down to f*ck?” have been given a Shakespearean makeover – “Art thee down to fornicate?” Even Kiwi classics took on a dated feel – “Dost thou wanteth a root?”

In the dating app, Grindr, the campaign borrows from the vernacular of the medium, as men-out-of-time proposition users with lines like “Upeth to?” and “May I behold thine aubergine?” 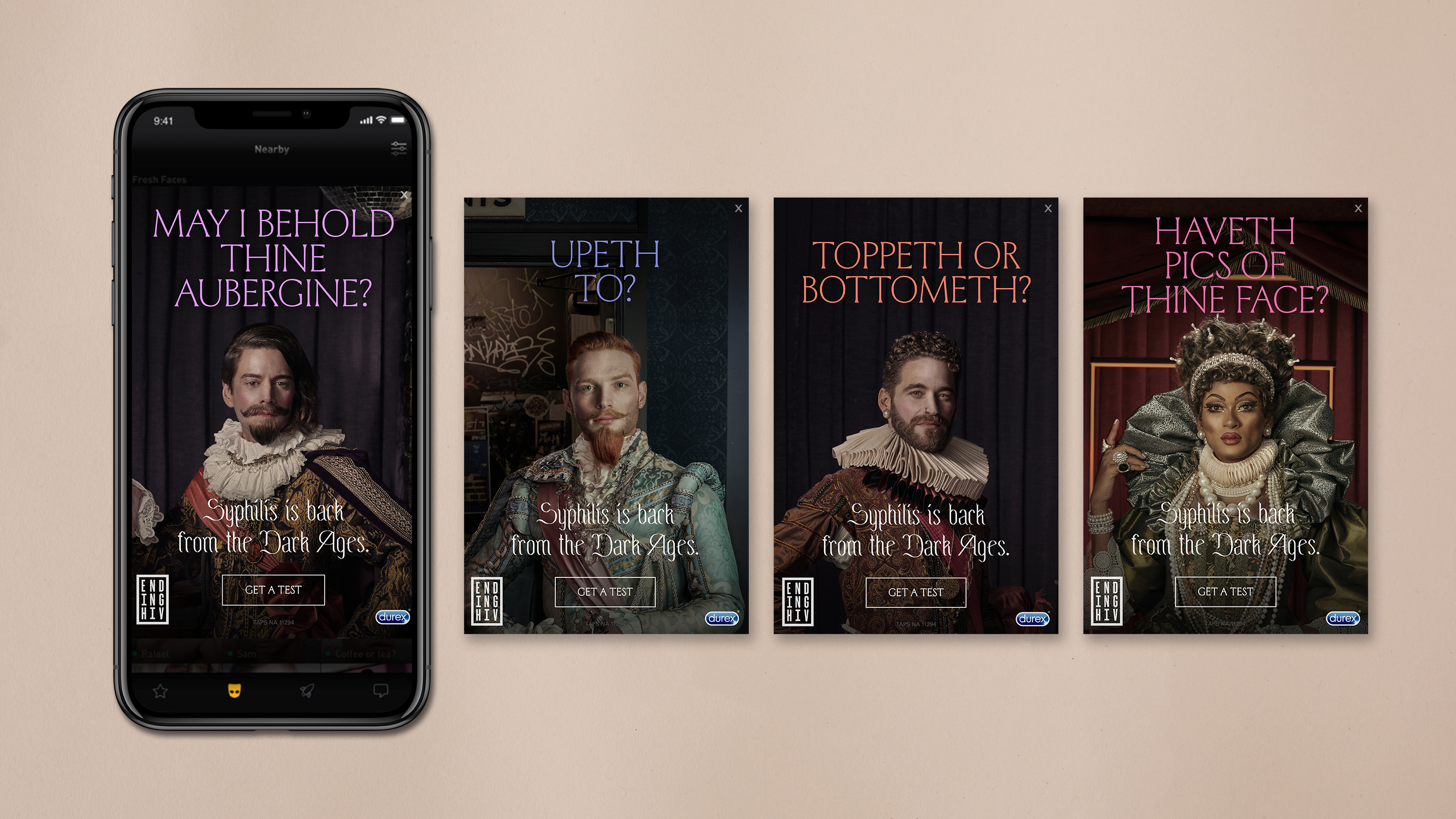 As this campaign is aimed at helping LGBTIQ+ community members play safer, the talent was sourced from these communities. Working with models like drag queen and activist Medulla Oblongata, further added to the authenticity of the message.

The historic look was achieved in collaboration with the Pop-up Globe Theatre and stylist Lucy Jane Senior. Authentic period costumes were created for each model and Abi Taylor provided era-appropriate hair and make-up, including a bespoke wig made for Medulla in the style of Queen Elizabeth I. 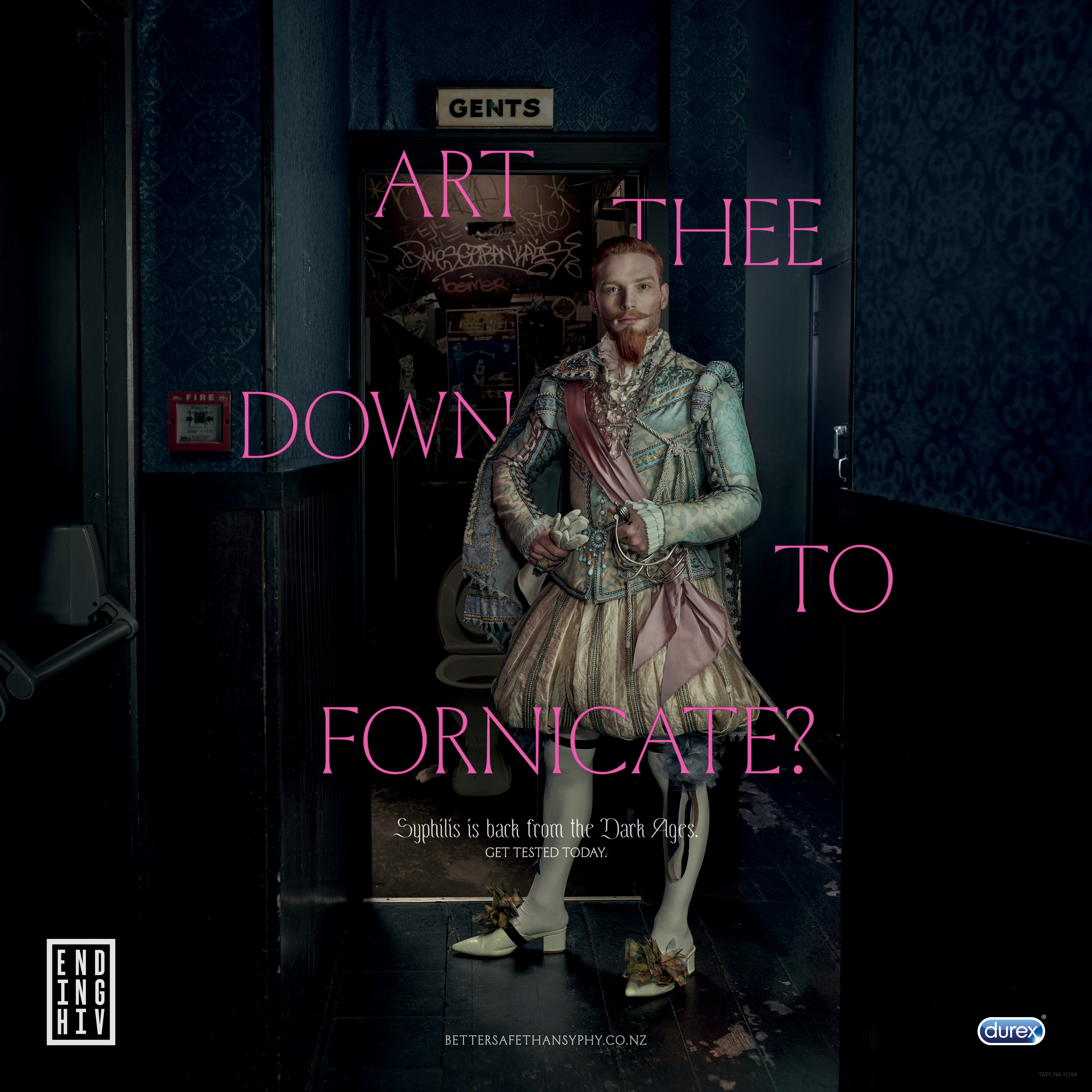 Combine these meticulous details with the artful lighting and skill of photographer Ross Brown, and the result is portraits that look like they stepped out of a 16th century painting, contrasted by undeniably modern backdrops.

Adds Power: “Syphilis is very dangerous and can eventually be fatal if left untreated, so we teamed up with FCB to raise awareness about this outbreak in a way that would get our communities’ attention. Syphilis can often be symptomless – so the main message is for people to get tested regularly.” 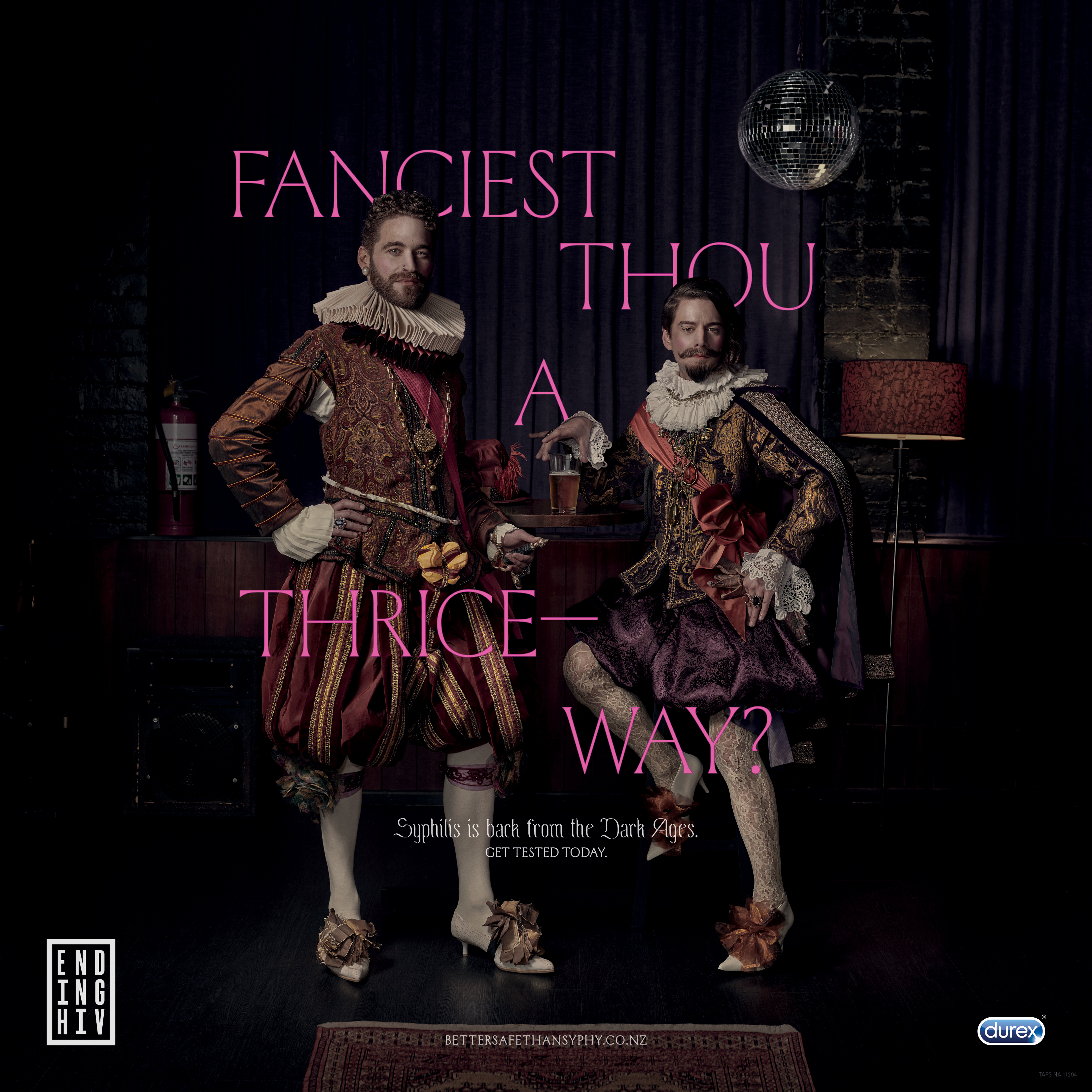 “Realistically, to really make sure we can leave syphilis transmissions in the past, we also need people to embrace safe sex. To further encourage this and keep playing safe front-of-mind, we’ve made thousands of condom wallets with safety messages like, ‘Cloak thy tallywacker’, ‘Wrappeth thy pecker’ and ‘Sheath thy wang’, to be distributed at venues, by order and at community events.”

Says Tony Clewett, chief creative officer at FCB: “To halt Syphilis in its tracks, we needed an engaging and thought-provoking campaign that our audience simply couldn’t ignore. I’m thrilled we’ve achieved it with a powerful message that was not only beautifully executed, but brings a smile to your face. A big thanks to everyone who went above-and-beyond to make it happen.” 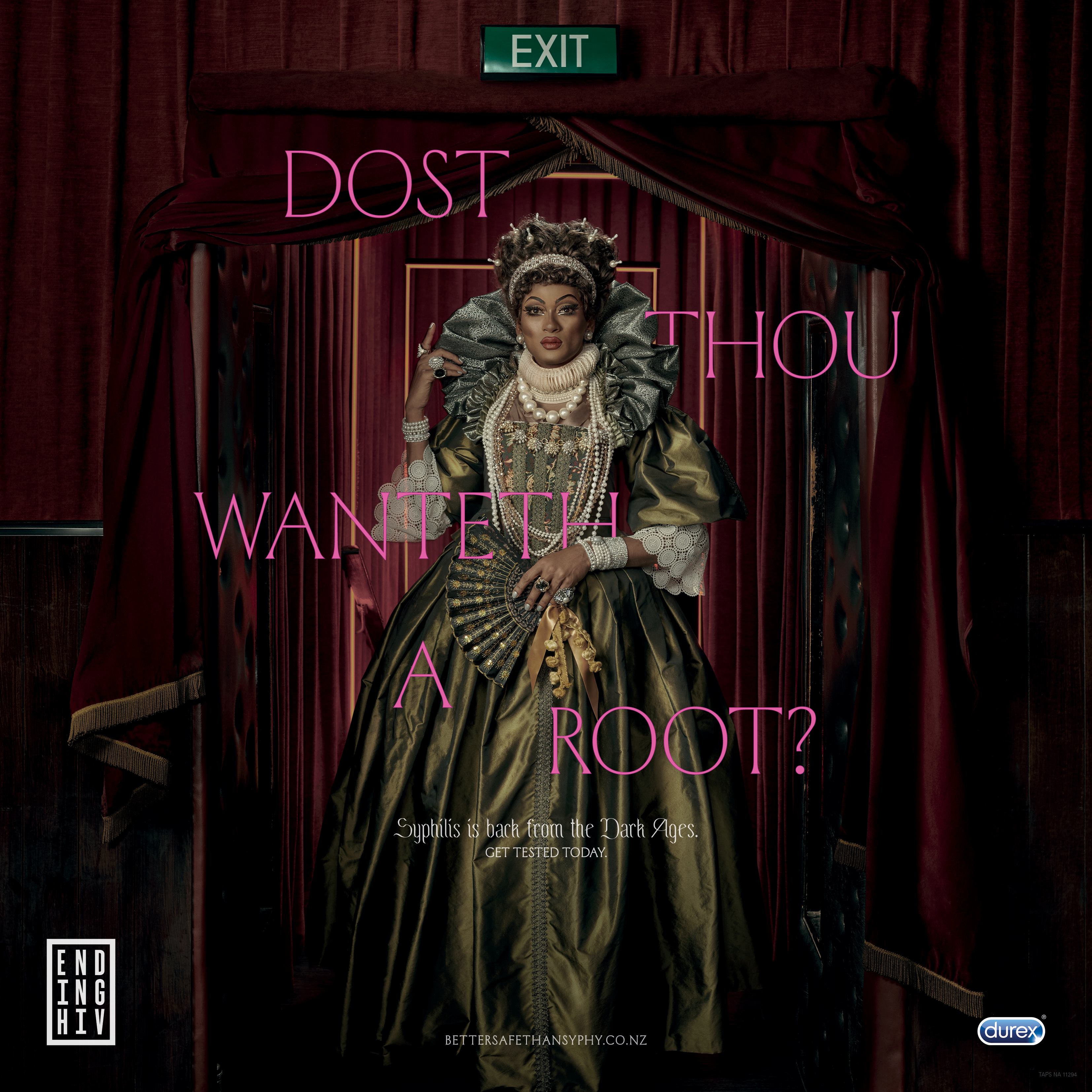