Bestads Rankings: Which are the Top New Zealand ad agencies and clients of the decade? 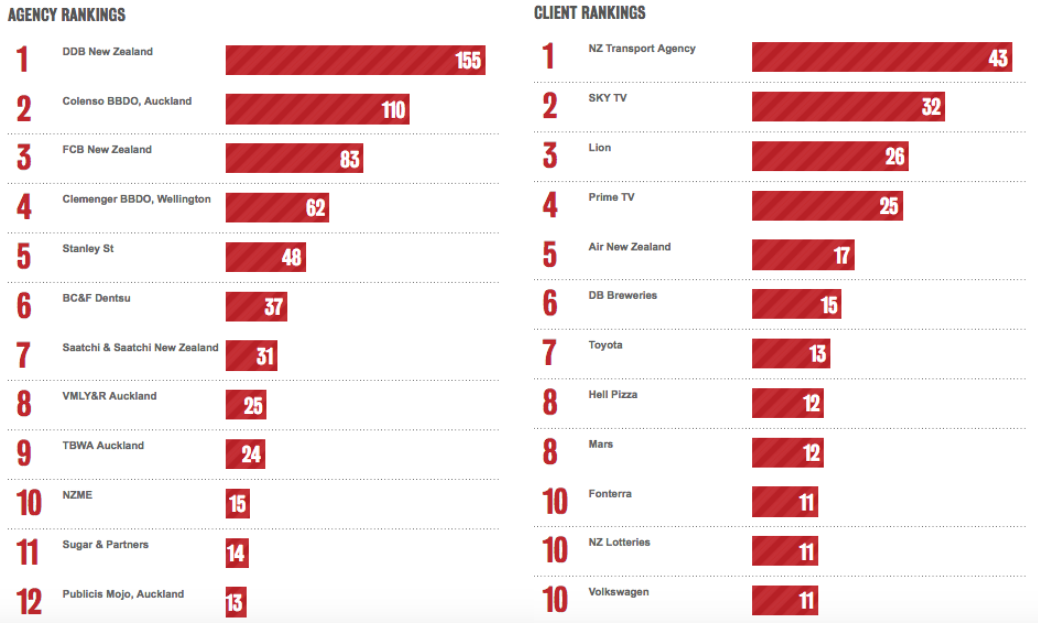 DDB is New Zealand’s most creative agency over the last ten years, if the annual Bestads Rankings are any guide. DDB New Zealand leads the agency pack on Bestads over the last 10 years with 155 points, followed by Colenso BBDO Auckland on 110 points. FCB New Zealand ranks #3 on 83 points followed by Clemenger BBDO Wellington at #4 on 62 points while Stanley St (formerly Ogilvy) is ranked #5 on 48 points.

NZ Transport Agency is #1 in the Client Rankings over the last 10 years with 43 points, followed by Sky TV in second spot on 32 points, Lion at #3 on 26 points and Prime TV at #4 on 25 points. Air New Zealand is at #5 on 17 points, followed by DB Breweries at #6 on 15 points and Toyota in seventh spot on 13 points. Hell Pizza is placed #8 while Fonterra, NZ Lotteries and Volkswagen share the #9 spot on 11 points apiece.

Started in 2003 and owned by Campaign Brief, Bestads showcases the very best and latest advertising in all mediums being produced worldwide, updated daily. The Bestads Rankings of the top advertising agencies in the world is based on points awarded for work selected in Top 6 of the Week on bestadsontv.com. The Rankings also include the top executive creative directors, creative directors, creatives, client companies, plus top directors and production companies.