Bestads Rankings: Which are the Top New Zealand production companies and directors of the decade? 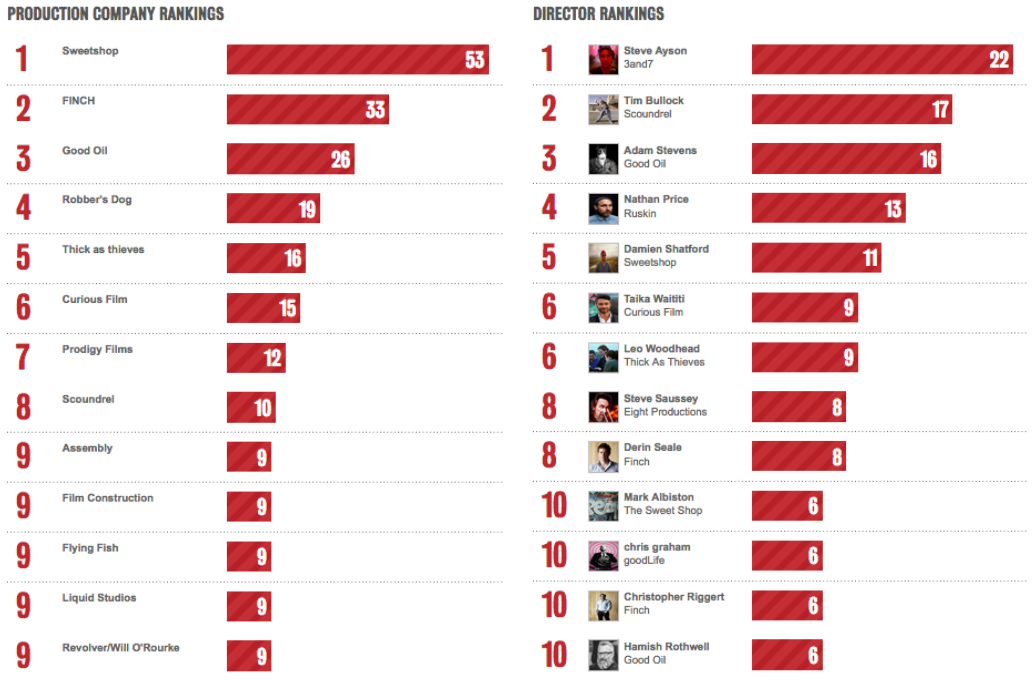 Sweetshop is the top production company in New Zealand over the last decade according to the Bestads Rankings. The NZ headquartered global company leads the production company pack on 53 points, well ahead of FINCH at #2 on 33 points and Good Oil at #3 on 26 points.

Robber’s Dog (since acquired by Good Oil) is placed #4 on 19 points, followed by Thick As Thieves at #5 on 16 points and Curious Film at #6 on 15 points. Prodigy Films (now defunct) is ranked #7 on 12 points, followed by Scoundrel at #8 on 10 points. Sharing the #9 on 9 points apiece is Assembly, Film Construction, Flying Fish, Liquid Studios and Revolver/Will O’Rourke.

Steve Ayson from 3and7 leads the Bestads TVC director pack on 22 points, followed by Tim Bullock from Scoundrel at #2 on 17 points and Adam Stevens from Good Oil at #3 on 16 points. Nathan Price from Ruskin is at #4 on 13 points followed by Damien Shatford from Sweetshop at #5 on 11 points. Taika Waititi from Curious Film shares the #6 spot with Leo Woodhead from Thick As Thieves on 9 points. Steve Sussey from Eight Productions and Derin Seale from FINCH share the #8 spot on 8 points, while at equal #10 on 6 points are Mark Albiston from Sweetshop, Chris Graham from goodLife, Christopher Riggert from FINCH and Hamish Rothwell from Good Oil.

Adam Stevens from Good Oil is at #6 on 16 points followed by Steve Ayson from 3and7 at #7 on 14 points and Tony Rogers from Guilty at #8 on 11 points. Brendan Gibbons from Otto and Christopher Riggert from FINCH share the #9 spot on 1o points.