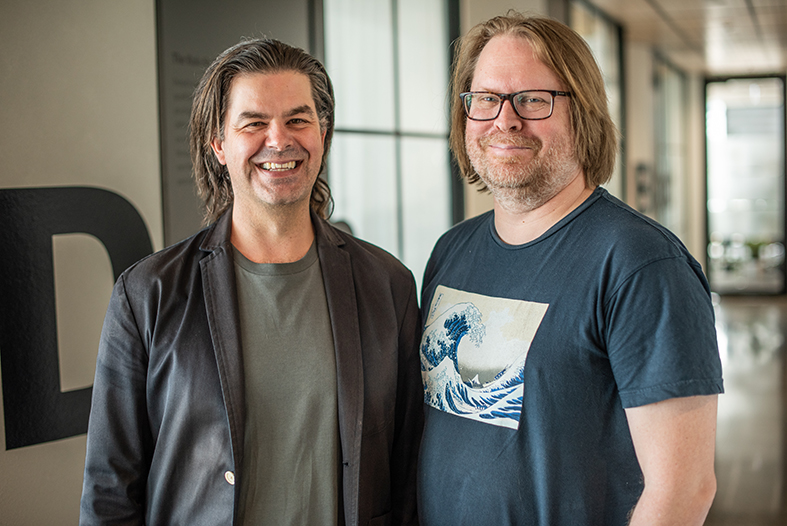 2019 was a big year for one New Zealand agency: named the fifth most effective agency in the world in the Global Effie Effectiveness Index, winning 10 competitive business pitches and moving house to cater for sizeable staff growth, all whilst producing world-class work for big name clients including Lotto, Lion, Volkswagen and Sky. DDB New Zealand is Campaign Brief’s NZ Agency of the Year.

The agency also enjoyed its greatest year of financial growth ever, with 2019 seeing a 24 per cent year-on-year growth, along with the DDB Digital team achieving a 50% revenue growth YOY.

DDB NZ was also awarded the title of Number One New Zealand Agency at the AWARD Awards and was ranked Number One Agency in the World in 2019 on BestAds.

On taking out Campaign Brief’s top honour, DDB New Zealand chief creative officer, Damon Stapleton (above right), says it’s a great honour: “And 265 people on this side of the Tasman are delighted to win this. It’s recognition of a whole lot of hard work over a long time.”

Commenting on award recognition in general, Stapleton adds: “I think award shows are about building confidence and they provide a target, a standard, something to aim for. Therefore they’re important, but my view is there are too many and if that ends up diluting their impact then they cease to play a role at all.”

He says awards shows should be hard won and a celebration of the work, and the effort made to get there: “The important ones mean a lot, as they should.”

The year’s standout creative work for Stapleton includes Lotto ‘Lost Ticket’ and KiwiRail ‘Near Miss Memorials’, which he says are hard to go past. He lists Steinlager ‘Tokyo Dry’ along with Pet Refuge and L&P ‘Best Day Ever – Zombies’ as other personal favourites. 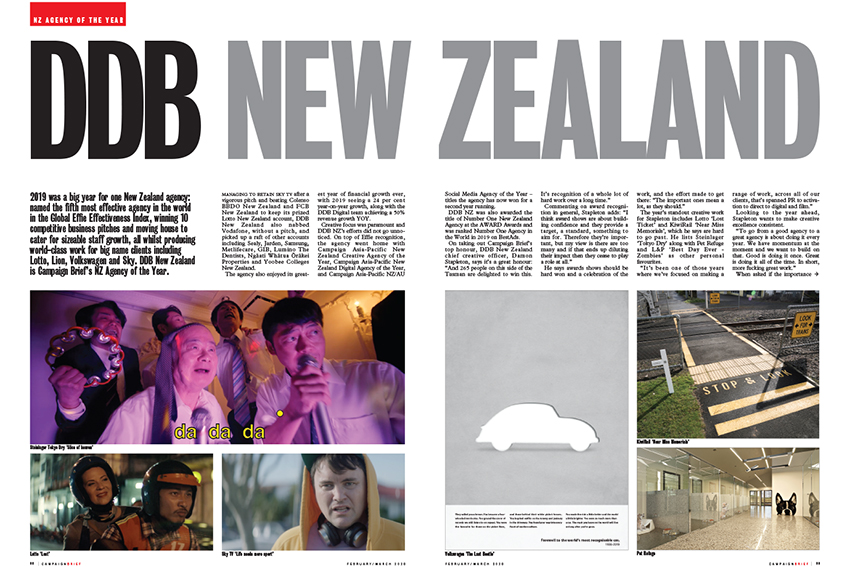 “It’s been one of those years where we’ve focused on making a range of work, across all of our clients, that’s spanned PR to activation to direct to digital and film.”

Looking to the year ahead, Stapleton wants to make creative excellence consistent.

“To go from a good agency to a great agency is about doing it every year. We have momentum at the moment and we want to build on that. Good is doing it once. Great is doing it all of the time. In short, more fucking great work.” 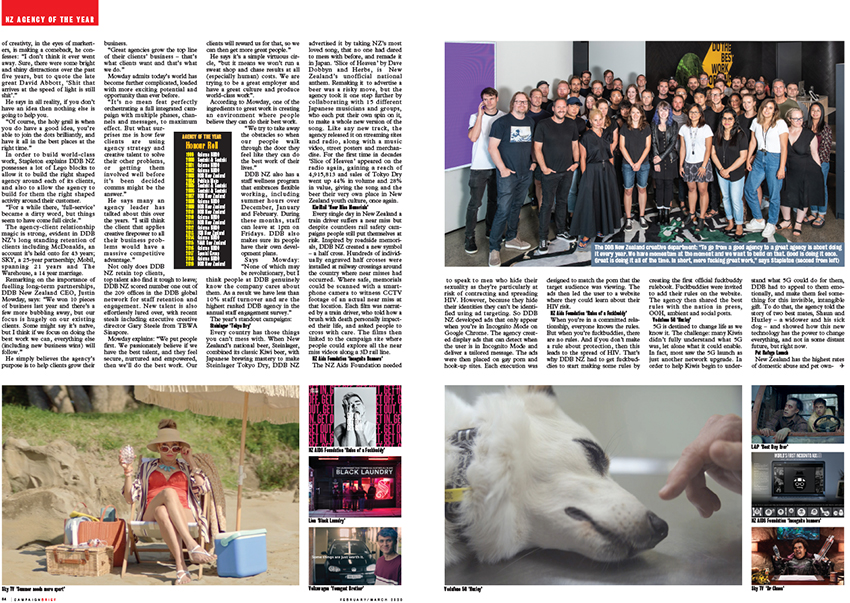 When asked if the importance of creativity, in the eyes of markerters, is making a comeback, he confesses: “I don’t think it ever went away. Sure, there were some bright and shiny distractions over the past five years, but to quote the late great David Abbott, ‘Shit that arrives at the speed of light is still shit’.”

He says in all reality, if you don’t have an idea then nothing else is going to help you.

“Of course, the holy grail is when you do have a good idea, you’re able to join the dots brilliantly, and have it all in the best places at the right time.”

In order to build world-class work, Stapleton explains DDB NZ possesses a lot of Lego blocks to allow it to build the right shaped agency around each of its clients, and also to allow the agency to build for them the right shaped activity around their customer.

“For a while there, ‘full-service’ became a dirty word, but things seem to have come full circle.”

The agency-client relationship magic is strong, evident in DDB NZ’s long standing retention of clients including McDonalds, an account it’s held onto for 43 years; SKY, a 25-year partnership; Mobil, spanning 21 years and The Warehouse, a 14 year marriage.

Remarking on the importance of fuelling long-term partnerships, DDB New Zealand CEO, Justin Mowday (above left), says: “We won 10 pieces of business last year and there’s a few more bubbling away, but our focus is hugely on our existing clients. Some might say it’s naïve, but I think if we focus on doing the best work we can, everything else (including new business wins) will follow.”

The rest you can read in the latest issue of Campaign Brief, which includes the annual CB Agency Hot+Cold Charts, out now.

You can view this issue online NOW and subscribe at Campaign Brief Online or request a subscription form from Mina via email. 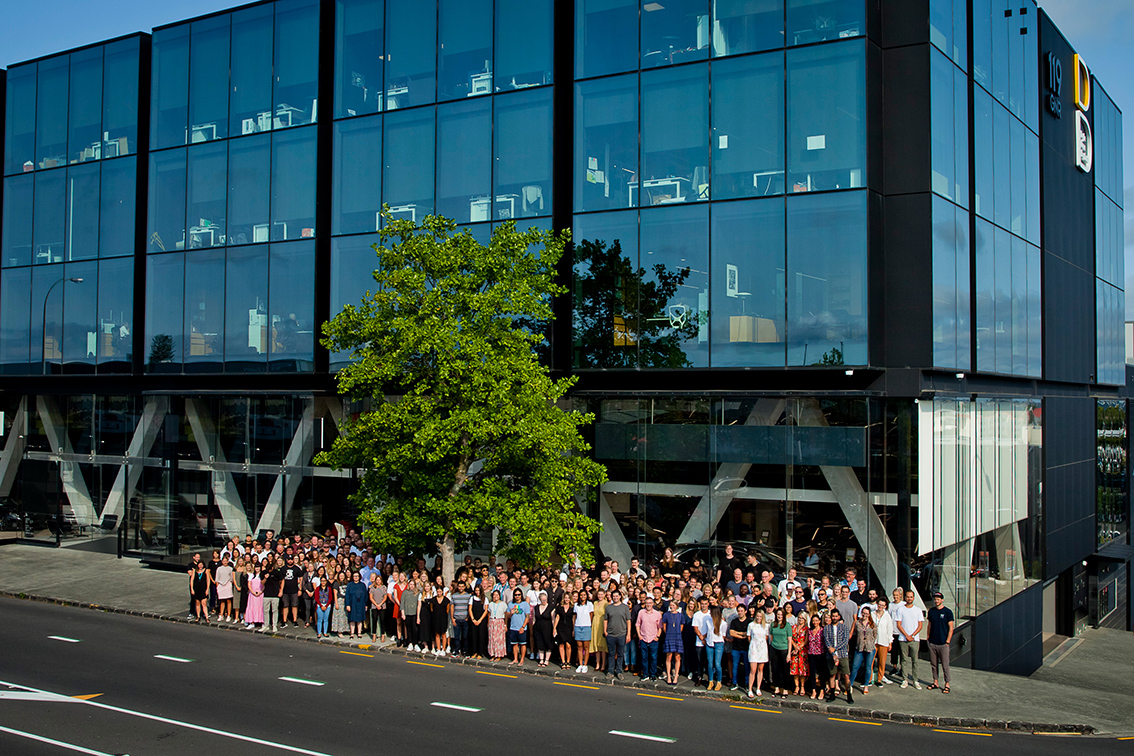 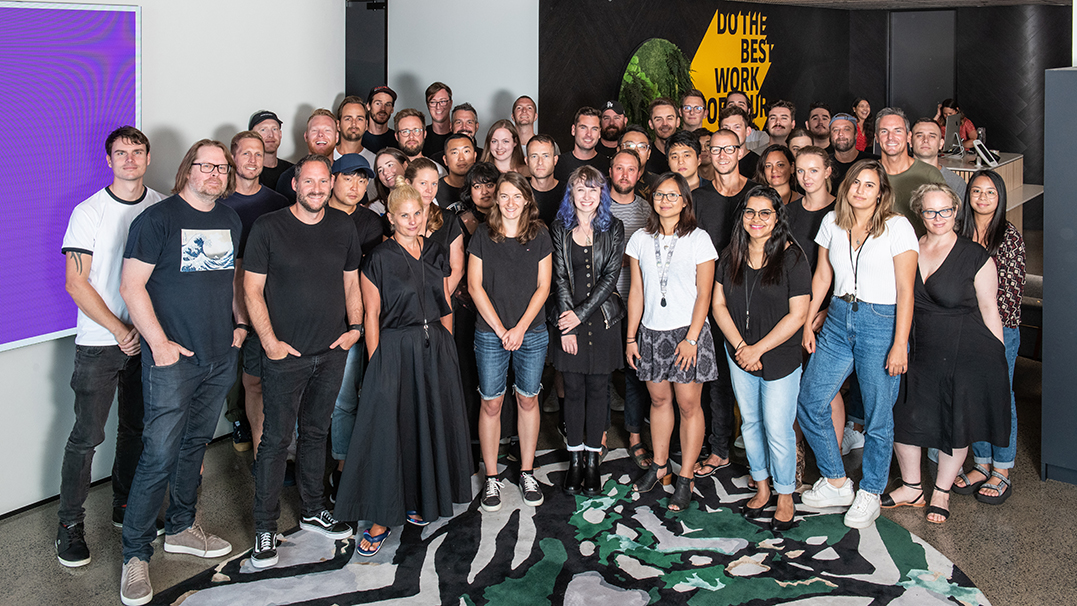