The WARC Media 100, the ultimate independent benchmark celebrating the best media ideas from across the marketing industry, is now released featuring the most awarded campaigns, agencies and brands in the world.

Compiled by WARC, the international marketing information company, the annual Media 100 Ranking is produced by combining the results of the industry’s most important global and regional media award shows tracked throughout 2019, as determined by the WARC Rankings Advisory Board and a worldwide industry survey.

Monty: The World’s First AI Predictive Commentator for Foxtel, by Mindshare Sydney, is the most celebrated campaign for media excellence of 2019. Australian pay TV network Foxtel ran a game-changing campaign to encourage people to pay to watch cricket, a product they had previously enjoyed for free.

To deliver more value and transform the viewing experience, Foxtel created Monty, a predictive AI commentator able to forecast when wickets would fall in live games. When Monty predicted a wicket, it triggered mobile display ads, pre-roll video and OOH to get people to watch, delivering an average weekly sales increase of 18%.

Says Katie Rigg-Smith, CEO, Mindshare Australasia: “As a self-respecting Aussie I love the cricket and I am thrilled to see Monty not only recognised as best in class but best in the world. It shows the power of provocation, one of our core values at Mindshare. It sees a great consumer insight married with powerful AI that delivered innovation and real outcomes. Credit to Jack Smyth and the team for dreaming it up, the Foxtel and the Fox Sports team who were bold enough to back it and our partners at Google.”

In second place is The First Colonel to Conquer eSports, by Mindshare Shanghai, which strengthened KFC’s relationship with gamers in China by integrating itself in League of Legends. In third, The Adaptive Data Lighthouse by Mindshare Mumbai for soap brand Lifebuoy, targeting people in rural India, at most risk of infections preventable by good hand hygiene.

Starcom Chicago is ranked #1 media agency, having climbed up from #20 last year. Campaigns for Samsung, Vans, ESPN and The North Face, all ranked in the top 100, driving the agency to the top of the table.

Says Kathy Ring, CEO, Starcom USA: “It’s an honor to be named to WARC’s Media 100 list. It reinforces that Starcom’s Human Experience approach – putting the consumer at the forefront based on astute analytics and insights and arresting creativity – changes behavior that drives business outcomes for our clients.”

Mindshare Shanghai improved its rank by one place, up to second this year, with work for KFC, Maybelline and Lay’s ranked in the top 30 campaigns. Mindshare Sydney follows in third place, up from 12th last year, largely driven by Monty, the top ranked campaign.

Mindshare Worldwide claims top position as the most awarded Network, improving its rank from 3rd last year. The media network had 27 different agencies contributing to its total points, eight of them in the top 50; and an impressive 16 campaigns ranked in the top 100. MediaCom drops down to second place and IPG Mediabrands is up one place to third.

Says Nick Emery, global CEO, Mindshare: “The best media agency the world. How cool is that? My Mum is impressed! The only reason we get out of bed in the morning is to produce great work and have some fun doing it. I could not be prouder of our whole network. Thank you to all our clients who took the risks and if anyone else wants to break some rules and share our values of speed, teamwork and provocation then you know where to come!”

WPP continues its run at the top of the media holding companies ranking, driven by the strong performance of its Mindshare Worldwide network, together with a further 10 networks in the top 50. Omnicom Group retains its second position, as does Interpublic Group in third.

A strong performance in Asia by KFC led the fast food retailer to the top of the brand rankings this year, with two campaigns in the top 100, including #2 campaign, The First Colonel to Conquer eSports.

Foxtel improved its rank from sixth last year to second this year and Lifebuoy moves up from 13th to second place. Three brands entered the top 50 for the first time: Sport Chek / Canadian Tire goes straight in at #7, while Uber Eats and Uber rank #9 and #10 respectively.

Unilever improved its rank to hit the top of the advertisers table this year. The FMCG giant has three brands in the top 50 – Lifebuoy, P/S, Knorr – with a further 25 brands contributing to its success. Yum! Brands follow in second place and Procter & Gamble in third.

Says Conny Braams, chief digital and marketing officer, Unilever: “We’re thrilled to be announced as the #1 Advertiser in WARC’s Media 100 for 2020. We’re proud of Unilever’s consistent achievement in this category of media excellence. This is testament to the innovative and effective work of our media teams and media agencies across the world and we look forward to more such accolades in the future.”

USA retained its top country rank for a third year with 22 campaigns in the top 100, three of which made the top 10. Australia improved its rank by one place to take second place, with 10 campaigns within the top 100. China jumps from 6th to third place with 11 campaigns.

The most highly ranked campaigns and companies in the 2020 WARC Media 100 are: 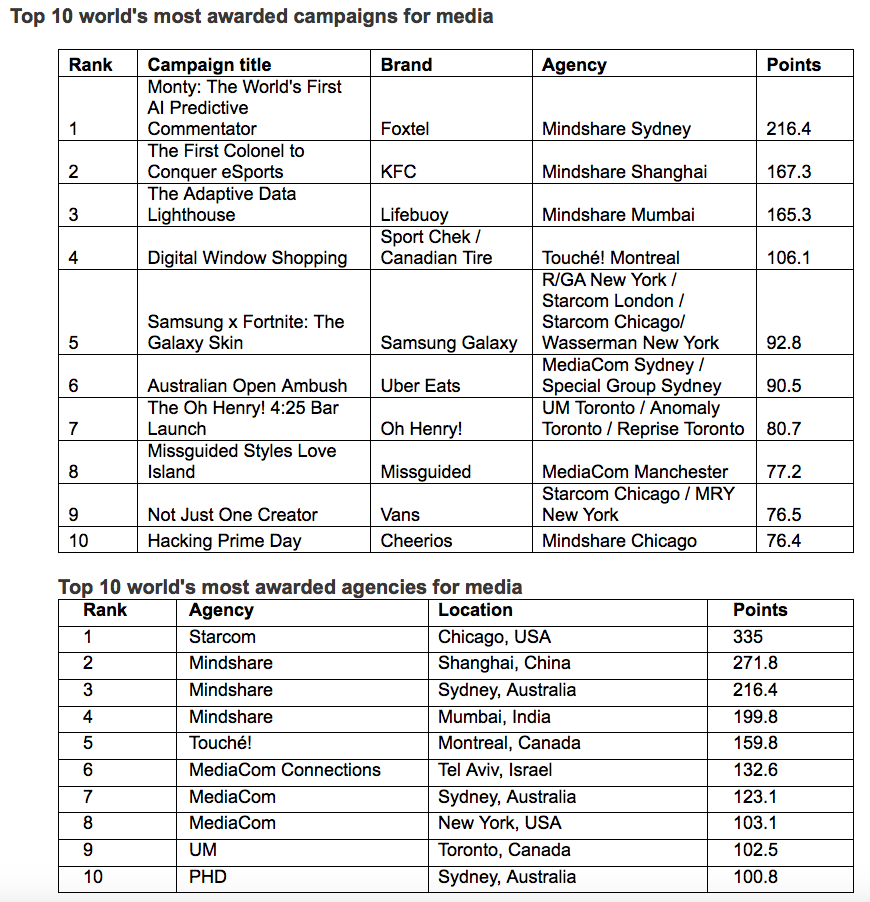 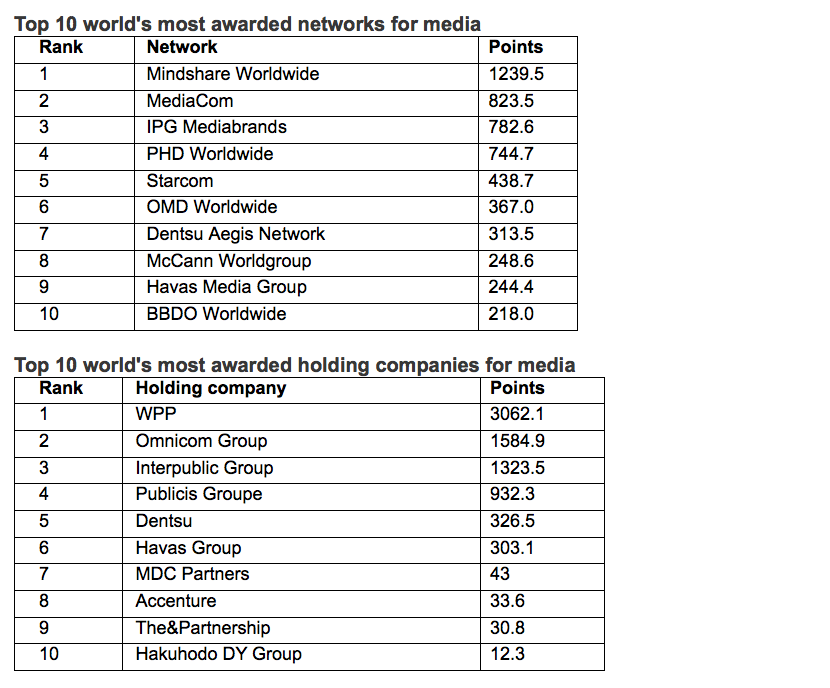 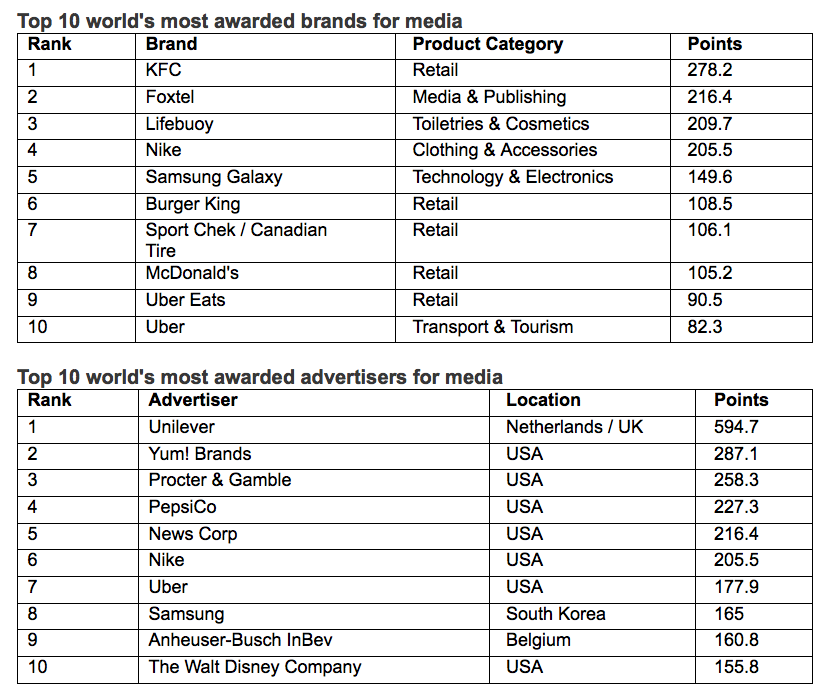 The WARC Media 100 has been compiled by applying a rigorous, unbiased and transparent methodology to the analysis of the results of the most important global and regional shows for media excellence, as determined by the industry following consultation with the newly introduced WARC Rankings Advisory Board and a worldwide survey. This consultation and survey will be carried out each year to ensure that the Rankings continue to reflect the opinion and meet the needs of the industry.

The award shows tracked to compile this latest WARC Media 100 were:

The WARC Effective 100 will be released on 17 March. An analysis of the WARC Rankings and brand stories report will follow at the end of March. The WARC Creative 100, already announced, can be viewed here.