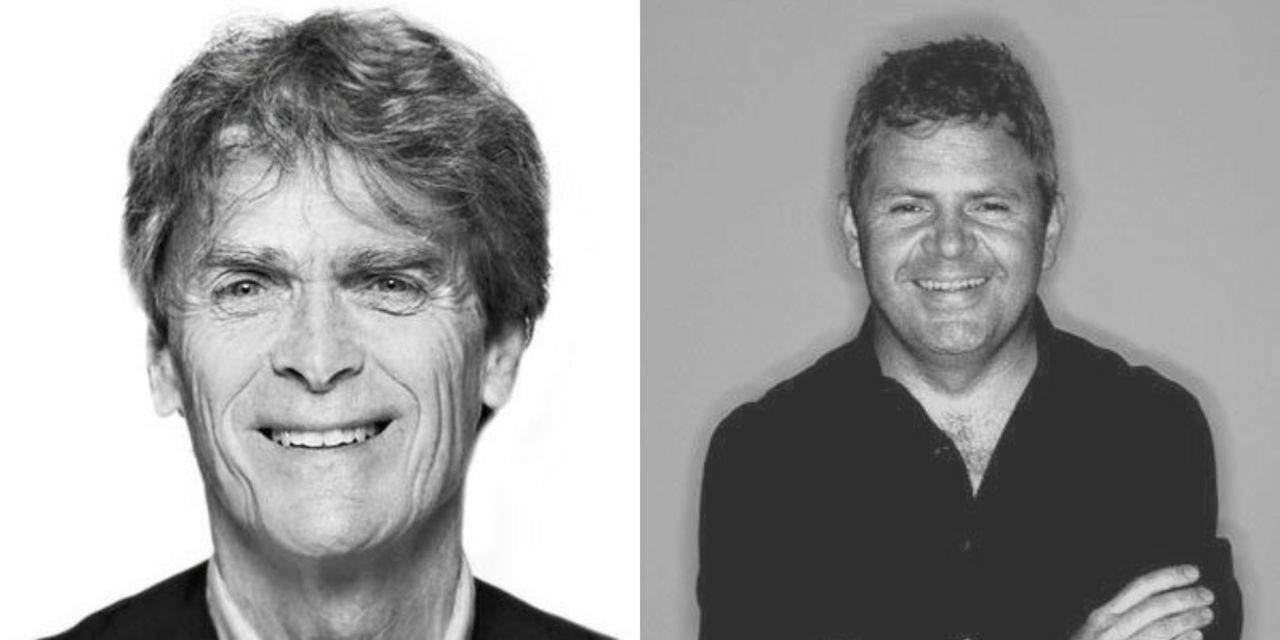 Says Catmur: “I was very lucky to wrangle the chance to chat with the legendary Sir John Hegarty (left), founder of BBH, wine maker, part-time golfer and non-fisherman. We talk about his love for New Zealand, the curse of scams, how advertising will be after Coronavirus, and a heap of other topics. We even had time to squeeze in a few of your questions. (Including where he buys his suits, Toby Talbot.)

“I also chatted to Mike O’Sullivan (right) about how a lad from Northern Island turned up in New Zealand and became ECD of Colenso, Saatchis and then Droga5 all on a diet of potatoes and lager. We also chat about how we started out together working in London and somehow managed to evade being fired.

Says Catmur: “Sir John and I formed a close relationship while spending several minutes in a lift together in a hotel in Cannes in 2006. I felt that was a strong enough bond to ask him on the podcast and, it being the lockdown and everything, he couldn’t think of a reason not to.

“For those of you who wonder why John is on this New Zealand advertising podcast I should point out that his wife is a Kiwi and that they come over here every February to get away from the London winter.

“Subjects we discussed include his love for New Zealand, where he gets his suits, why he hates scams, his Cannes jury experiences, who is the great unsung hero of world advertising, and how we should look to come out of Coronavirus lockdown. Many people sent in questions, and I asked as many of those as he had time for.”

“I first met Mike at the School of Communication Arts in London in1988. For some reason we got on and worked together for five years in London trying to make a name for ourselves with limited success.

“Following a chance meeting with a kiwi in Cancun, Mexico in 1995 we were offered a job at Y&R Auckland.

“In the end Mike came, I stayed at home, and unleashed from the handbrake of working with me, he went on to be ECD of Mojo, when it still existed; then together with Roger McDonell (and others) he started Colenso BBDO on its path to glory, before a lost year at Clemenger Melbourne. He returned to Saatchis NZ and together with Andrew Stone returned the agency to glory. The two of them then left and had mixed fortunes setting up Droga 5 in New Zealand before Mike went out on his own setting up The Collective and Many Minds where he is now.

“I was one of Mike’s best men on his marriage to Stacey on Kawau island a hundred years ago; I am an absentee godfather to Mike’s younger son, Danny, who is an avid listener to the podcast (hi, Danny) but I’m sure that won’t stop us from abusing each other.

“Mike also introduced me to fishing, though I overtook him many years ago.

“Particular thanks to Shane at Franklin Road for sitting through the remote recording just in case I touched the wrong button and the technology blew.

“Thanks also to all you listeners for the great feedback and (occasionally) insightful questions.”