Designed to help educate and build awareness around misinformation and fake news, the campaign was commissioned by Netsafe after the completion of New Zealand’s first survey to better understand the awareness of misleading and false information. Kiwis are getting caught up on what’s fact and what’s fiction, with 52 percent admitting they have fallen for fake news, mostly due to misleading articles or headlines

Netsafe’s survey has revealed 93 percent of Kiwis have heard of the term fake news, nearly half (48 percent) are concerned about mistakenly spreading it, and 14 percent mention seeing misleading stories related to COVID-19. 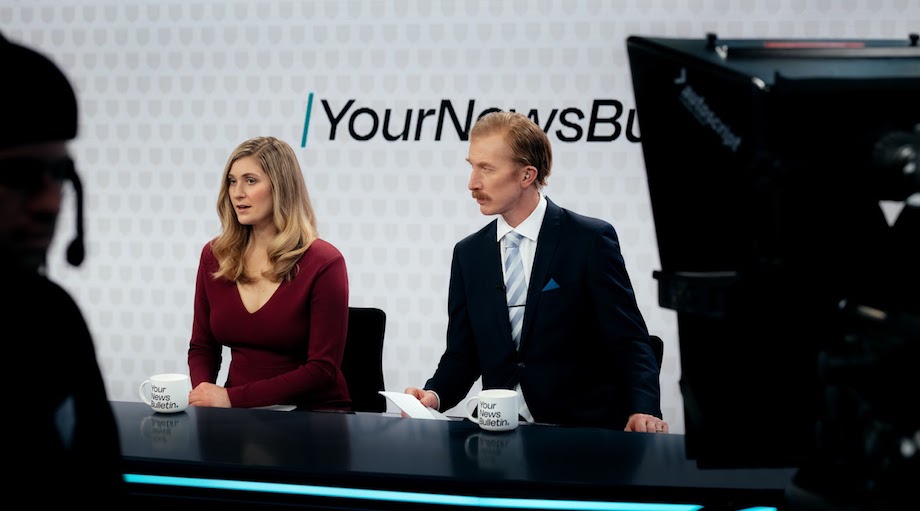 Your News Bulletin employs satire in creating ‘news’ to hook people into the campaign. It includes a series of hilarious kiwi videos depicting the ‘Your News Bulletin’ newsroom, in which presenters ‘Jim’ and ‘Kara’ report increasingly ridiculous fake news stories across traditional and social/digital media channels. The campaign has taken a fully-integrated approach, with ads across television, radio, print, outdoor and digital.

The Your News Bulletin ‘presenters’ use tactics like clickbait, misleading headlines, satire and more, all to try and lure people into visiting www.yournewsbulletin.co.nz. Once on the site, users are able to test their fake news knowledge, learn techniques to identify misinformation, and access resources to have conversations with family and friends. The campaign website was built in partnership with digital agency ED. 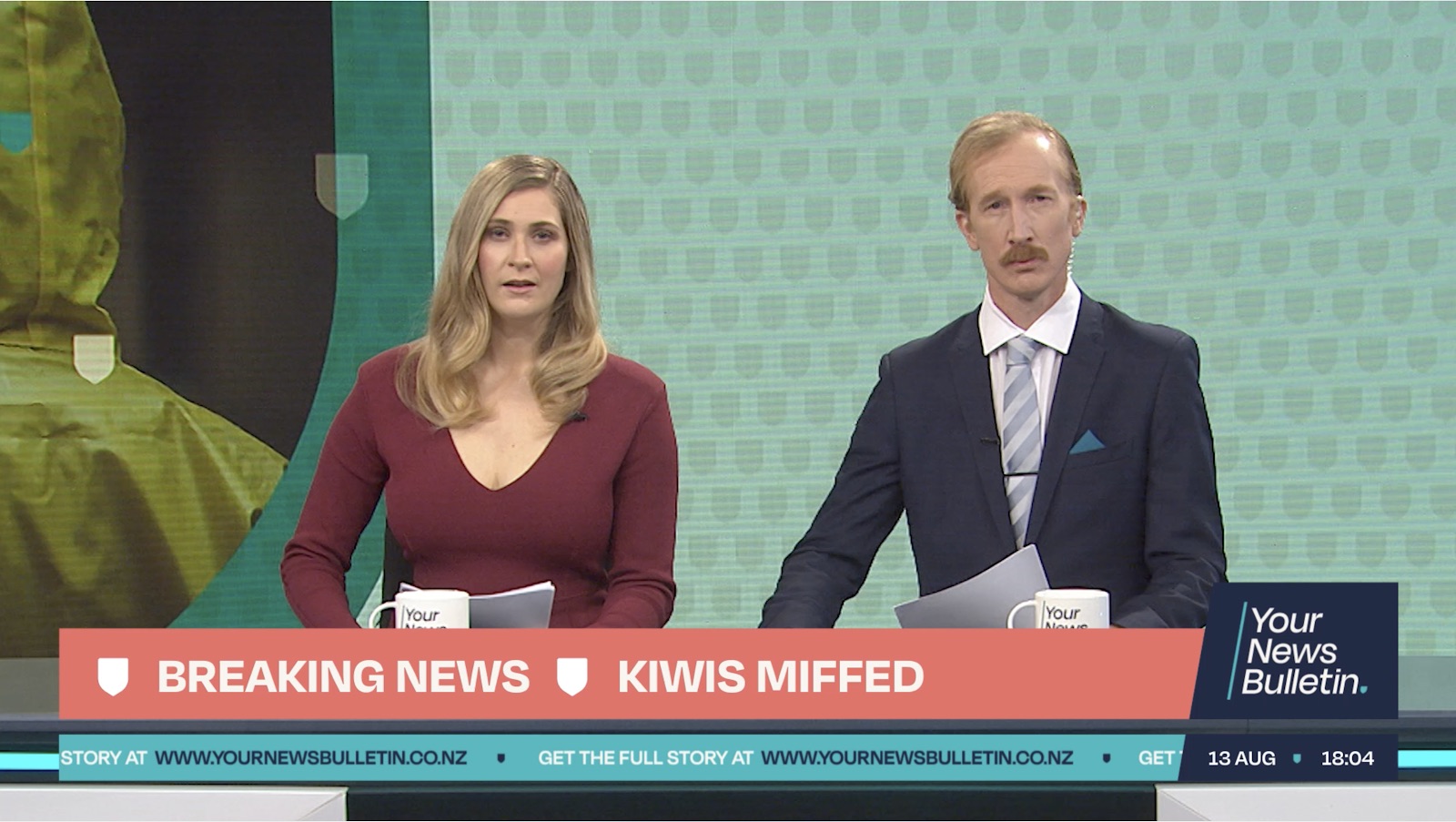 The campaign, after 4 days, has already gained 445,800 video views across Facebook, Instagram and Youtube and 11,300 visitors to the ‘fake news trainer’ website. Your News Bulletin will be trying to beat fake news at its own game for the next 6 weeks.

Says Sam Stuchbury, founder and creative director, Motion Sickness: “People often feel a lot of anxiety in relation to misinformation and fake news. It’s a very intimidating, personal and charged topic often resulting in reasonably heated reactions. We felt using humour and satire in relation to fake news would help reduce some of the tension, making it easier for kiwis to interact with the campaign and therefore tackle the issue head on. 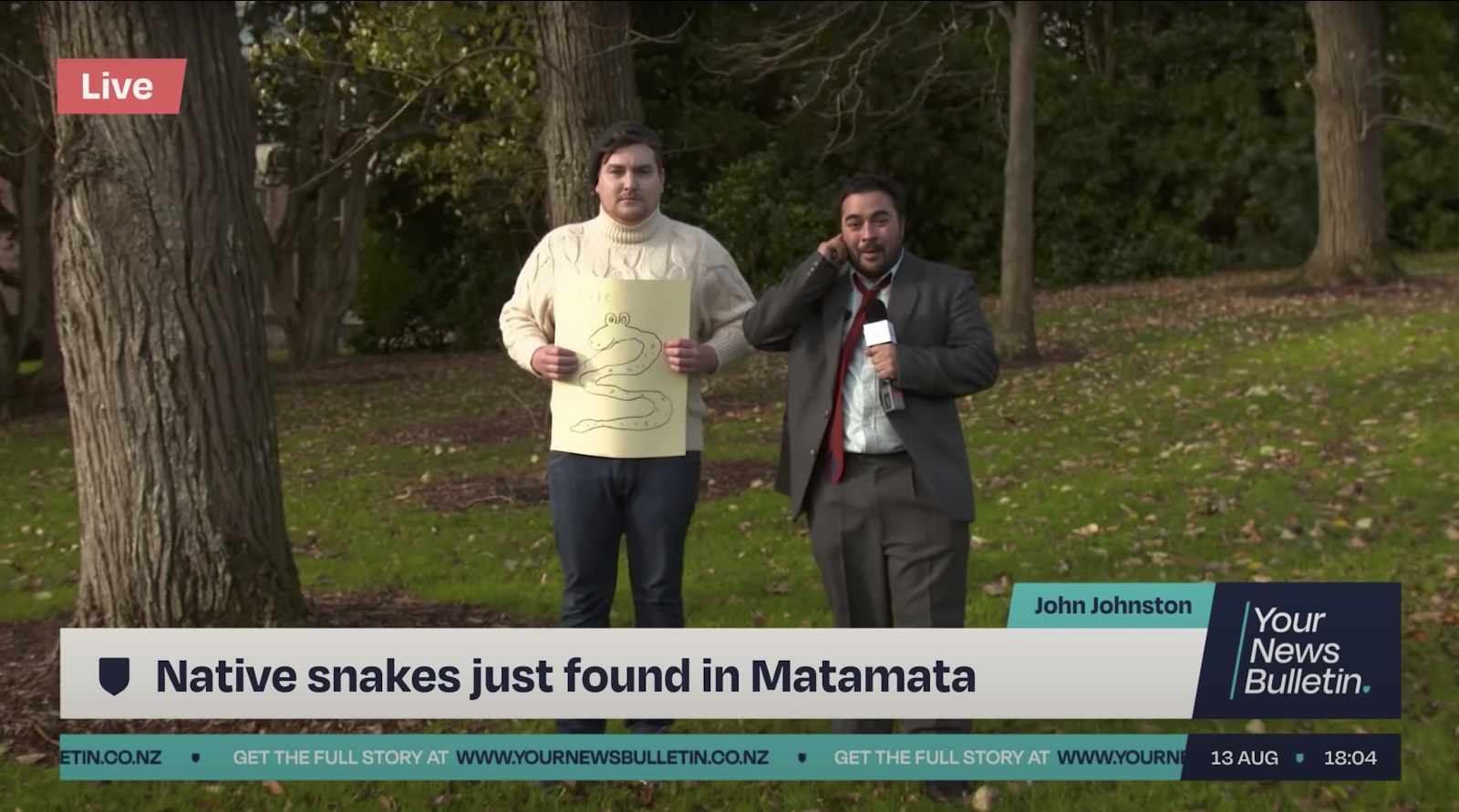 “Simulation is often the best form of education. Immediately confronting people with decisions around fake news (can this be real?) and then walking them through the critical-thinking process, albeit with a humorous spin, is a powerful and practical way to get the point across.

“We landed on the idea of building a fake news news bulletin pretty quickly. One of the core characteristics of fake news is that by its very nature, it often has some virality and sparks a lot of conversation. We asked ourselves pretty early on, “How can we use this to our advantage?

“We’ve been really pleased with the amount of people interacting with the campaign, 445,800 video views and 11,300 visitors to the ‘fake news trainer’ website in the first 4 days.”

“Misinformation and fake news is no easy problem to fix, and it’s not going to be solved overnight. However getting people to think more critically about what they are exposed to, and what they are sharing, is a good start. The core destination for the campaign was to yournewsbulletin.co.nz in which people can take the fake news quiz, test their knowledge and learn by doing. We also provided a suite of shareable, well-researched resources. If we can start to empower people to be more aware, understand, and spot fake news and misinformation, it’s a great start.” 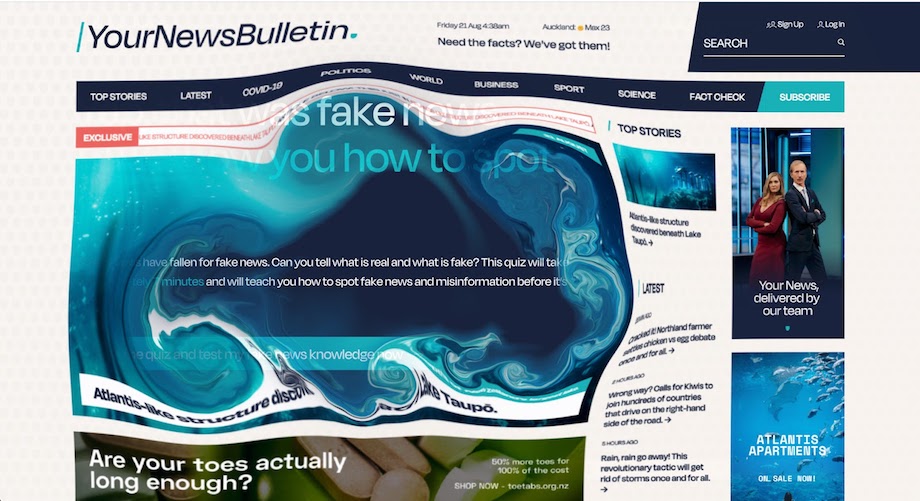 Says Josh Hawke, head of media, Motion Sickness: “Whilst social media is often identified as the predominant vehicle for the spread of misinformation, research has shown that Kiwi’s are concerned about fake news being present across all media channels.

“As a result, including a wide array of media channels in our mix was key to ensuring we were speaking to our audience at all moments of this scepticism.

“The nature of our creative platform meant we were able to achieve impact by leveraging the mediums themselves; such as emulating a full page of a newspaper, to breaking “fake news” bulletins on the radio.”