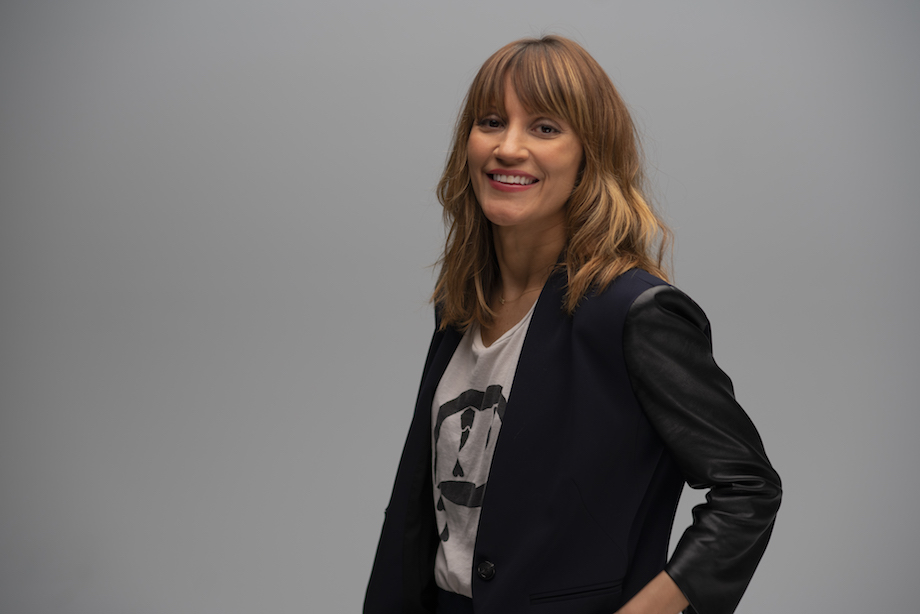 10 Takeaways with Tiff
Name: Tiffany Rolfe
AKA one of Ad Age’s “Women to Watch”
Global Chief Creative Officer of R/GA
Based in New York City
With over 20 years’ of design and creative experience
Known for developing creative solutions with cultural impact
Awarded Best of Show at One Show, Grand Prix and Titanium Lions at Cannes, and a Grand Clio
Clients include Verizon, Google, Nike, American Express, Instagram, Amazon, ESPN, AirBnB, Slack, Quaker, Reddit (you get the idea)
M.O. Make it meaningful
And she has been quoted as saying: “you need story and emotion to drive performance”

“If I’m going to go to heaven, that’s the work that’s going to help me get there,” says Tiffany Rolfe, Global CCO at R/GA.

Tiffany Rolfe has over two decades’ worth of experience in design and creative under her belt. As Global Chief Creative Officer of R/GA, her value proposition is to “design businesses and brands for a more human future,” by bringing technology into the story. Mostly, Tiff says, she wants the work to matter, she wants it to be meaningful.

The proof is in the projects, too. Like in the way the team at R/GA has identified opportunities for human connection in the face of great adversity – of which 2020 has had plenty. And in Tiff’s creative philosophy – standing up for the damn truth. Something that can seem increasingly rare in today’s digital world.

So we tapped Tiff’s brains for the secret sauce behind how she and R/GA are working to design a more human future.

Jay: “2020 feels like it could completely rewrite the brand playbook. How are you helping brands navigate this unstable time?”

“It is about being so clear and aligned in your purpose ahead of time that you can respond in real time,” Tiffany Rolfe explains of how brands can stand out today. To that end, R/GA helps its clients fully understand their brand purpose, so that they can operate in real time, responding to changing cultural moments as they happen.

Once clear about your values as a company, Tiff believes brands can then adapt to culture with the confidence that they know how to respond. “Many of the brands that have come out well during the pandemic and the racial crisis, have shown they are brands that know who they are and what their role is in culture,” Tiff says – pointing to examples like Ben & Jerry’s and Nike, as those that know how to respond as culture happens.

This keeps things interesting, too, as it allows for the agility to be less planned and more intuitive about how it’s all going to play. In addition to being true to who you are, though, Tiff says “you’ve got to be true to the context and the moment.” And, in this sense, “brands have to behave more like people.” Which is why a big focus for R/GA has been “helping brands understand what value they can add [to the current] moment.” And pushing them to “be more brave and respond in real time. To actually connect with people and do it on behalf of their purpose.”

Like with the recent initiative that R/GA launched in partnership with Verizon, Pay It Forward Live – which brought live concerts into people’s homes during lockdown, in service of small business. And like Merch Aid, which addressed the needs of black-owned businesses and organizations, in response to the Black Lives Matter Movement. “[This] became a platform that actually shifted with the culture changing over those couple of months that we ran it,” Tiff explains.

(Merch Aid, an initiative by R/GA to bring artists to the aid of small businesses by creating merch designs so customers could still support their favourite local businesses from afar.)

Of course, the ability to respond to culture in real time also requires that creatives be open to real insights, as R/GA demonstrated with the Pay It Forward campaign. “We were in this state of crazy pandemic where there [was] permission to be a little bit looser and… take those chances,” Tiff reflects. “I can be more powerful with my creative if I connect it to something meaningful; to real insights.”

So harnessing those real insights by tuning into culture and communities in a diverse way has become an important priority for the CCO. “Creative today is so nuanced and it taps into so many different types of communities that there’s no way one person with their life experiences is going to be able to imbue all of the knowledge and insights of the world,” Tiff explains. So, for R/GA, it’s about holding a higher standard and bringing creative storytelling back to data driven marketing.

That has been a big part of its success over the years. Known for an uncanny ability to sense the next wave of change, R/GA has always remained open to shifting insights and has pivoted the company accordingly every nine years since inception. “At R/GA change is a feature not a bug,” Tiff says. “We’re only ever 80% done. We live by the ‘brand as operating system’ model ourselves.”

Although even nine years feels a little long in these times, she adds. “We have had nine years of change in the last nine months. The key for us is that you have to be ready and embrace change. It’s the only way to survive and thrive.”

Part of breaking boundaries with good creative is also about finding those pain points, though. Like the inherent tension between working with technological developments and also helping brands to design a more human future – which is all part of R/GA’s value proposition.

Jay:”There’s an inherent tension here though isn’t there? Most of us don’t equate a more human future with more technology and data.”

“For us, technology is the thing that will get us into the future and help us be more human. We truly believe technology is the way forward,” she says. It is for this reason that Tiff and the R/GA team lean in to technology, but strive to do so consciously; deploying tools like data and AI in the most human way possible.

“[It’s about] being intentional around that [and asking]: ‘How can we be on the human side of technology?’” Which is why a big part of her work to date has been about utilizing the latest technology in service of humanity.

“I think we all have to keep technology in check,” she points out. “It’s our responsibility to have it work for us, not us work for it.” But, when used in the right way, she believes that it has the power to help brands bridge important relationships with people.

Technology was definitely key to fostering real time connections in the Pay It Forward campaign – which was an example of a brand embracing uncertainty to deliver authenticity. “It was awesome because it wasn’t something that you normally see brands do,” Tiff says. “They’re usually very planned. We know what we’re going to do, we test it all out, we produce it beautifully and we have all these things ready to go. But, in a matter of days, we created this concert, utilizing platforms [like Twitter, Instagram and Facebook], to actually do it live.”

This is the kind of creative approach that allows brands the freedom to fail. And, in doing so, helps them to engage their audience on a deeper level through humility. Tiff touches here on the idea of “brand as operating system” – with a willingness to both put stuff out there, but also make it better as you go. “[Behavior] changes by the day and it changes based on the context,” she explains, “so there isn’t that simple in-stone framework that you can use anymore to connect with people meaningfully.”

What is her solution, then? To open things right up and embrace a test and learn philosophy, but one guided by purpose. To understand that the digital world moves much faster now and that, in order to interact with that world, you need to be confident in who you are as a brand and how you can best respond in the moment, to bring value to people.

This involves encouraging brands to be brave and collaborative; to embrace uncertainty by not having everything so planned and perfect. “I think you can have a much broader, bigger impact if you are generous with how you think about partnerships,” Tiff says, “and how you think about opening it up.” With Pay It Forward Live, for example, the project was opened up not just to Verizon, but to a variety of other partners as well – to leverage multiple networks and achieve greater scale. The idea was to “let them take it and see what they build from it,” Tiff explains.

Looking back on her career to date, Tiff says that pursuing the truth is one of the key things that’s helped get her to where she is today. It is an honest approach, she says, that allows her to “push the creativity and do crazy shit because it’s rooted in something real and something that tells that truth.”

Perhaps one of the biggest truth-telling campaigns of Tiff’s creative career has been the anti-smoking campaign for teens called The Truth. “There was a psychology piece to that that was really interesting to understand,” she says, explaining that it required asking some of the tough questions. Like: “What are we really fighting against?” And “What are we really solving?”

Where cigarette companies have historically represented a form of anti-establishment rebellion for teens, Tiff and the team sought to subvert this and “create a new rebellion, in the form of truth and [uncovering the fact] that, behind the scenes, there was manipulation happening.”

This is the work that the Chief Creative Officer describes as her ticket to heaven. “And it was the most successful anti-smoking cessation campaign of all time,” she says. In 2014 Advertising Age named Truth one of the top 10 ad campaigns of the 21st century. Which just proves the power of leveraging truth for creative innovation – an art in which Tiff and the R/GA team have become totally adept.

In a fast-paced digital world, then, Tiffany Rolfe and R/GA stand out as pioneers that embrace change and lead with purpose. But they also understand the gravity of this mantle – especially in the face of all things 2020. “We ourselves are in the midst of change,” Tiff admits. “And we have new global leadership now. We think that we’re poised for leading the change, but like anyone, we have to turn our words and beliefs into actions.”