Blast from the past: Harnessing the power of nostalgic experiences in the digital age – brought to you by Facebook Curated ANZ

Experience Design Director at The Monkeys, Tim Smith, shares his thoughts on carving out immersive experiences through the power of nostalgia.

“I always push for ideas that are experience-led and interactive versus simply pushing a message,” says Smith, as he reflects with Facebook’s Creative Strategist, Ollie Beeston, on the success of the Krispy Kreme Throwback Party campaign. “That’s what I get particularly interested in — how technology and both emerging and existing platforms can create new and better experiences for people.”

Candy-crusted fingers, blue tongues, bike rides down rugged terrain — press rewind, and you will likely find a childhood memory that makes you smile. While nostalgic marketing has been around for a while, established and emerging digital platforms are asking brands to tap into the power of nostalgia in a fresh and authentic way. 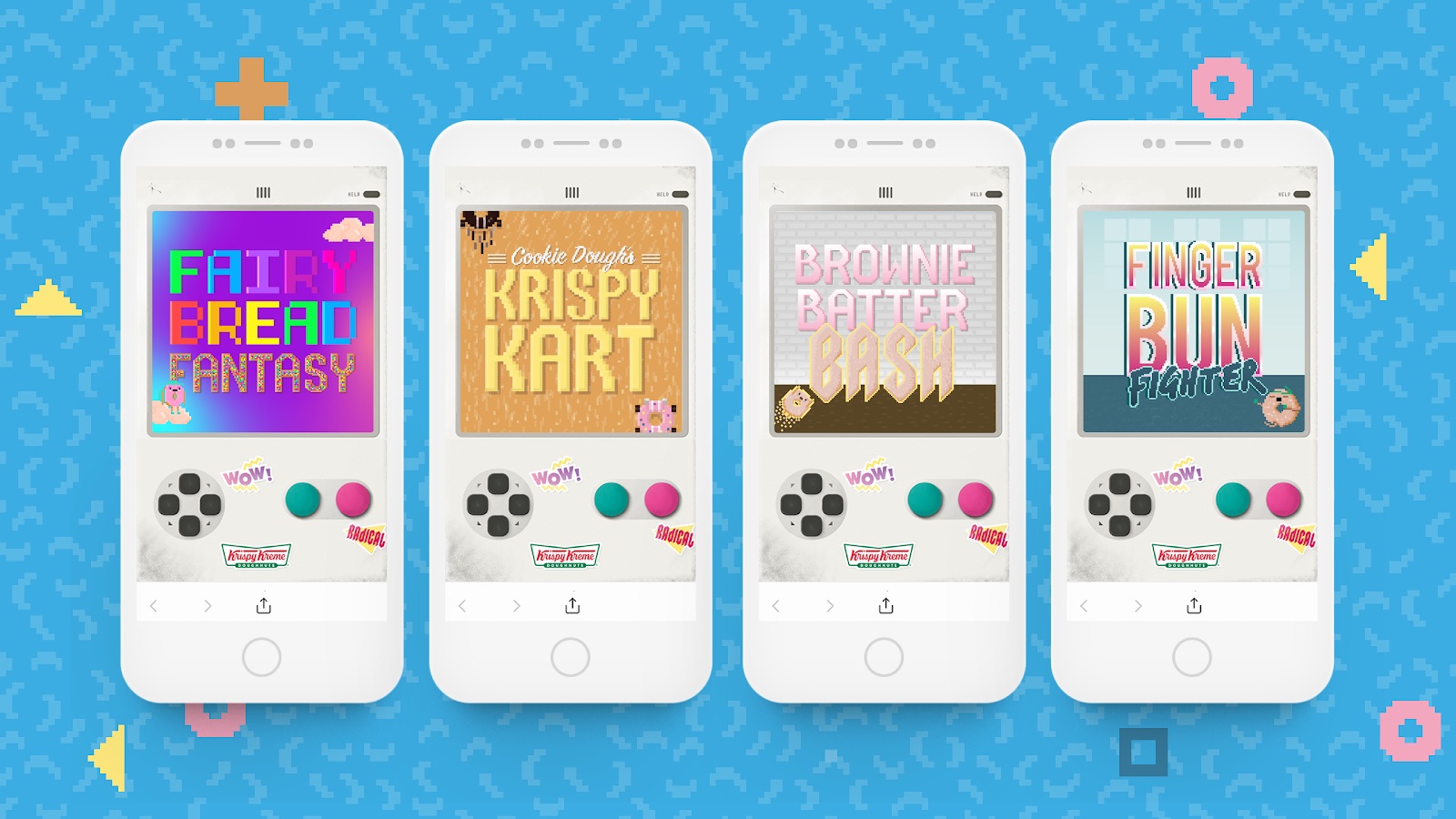 (Each new Throwback donut flavour got its own retro arcade game)

This was a challenge The Monkey’s team dived into when they were enlisted by doughnut giant, Krispy Kreme to re-engage and tap into new audiences within the Australian community. “Krispy Kreme came to us with an initial problem where they’d identified a lag in growth, and so they wanted to do something quite substantial in terms of marketing and identifying which audience to go after,” says Tim.

After researching the brand in depth, Tim and his team found that growth would come in unlocking the childhood memories of Australian Millennials. “These were the people that had grown up with Krispy Kreme and loved it as kids. But Krispy Kreme wasn’t front of mind for them, and so we helped the brand craft an idea to engage with that demographic.”

Using the Australian-centric doughnut flavours that came from the Throwback Party Range — Finger Bun, Cookie Dough, Fairy Bread, and Choc-Brownie Batter — as inspiration, The Monkeys knew that they would first need to take customers back in time to remember the joy these childhood flavours elicited with a frictionless experience — a mission which on a smaller budget, was no easy feat. “I suppose a big challenge for us the whole way through was the budget. Your initial thought is that’s going to hem in creative output. And in fact, what it actually did was make us narrow it down and go, we actually don’t want to compromise the creative output of this idea at all.”

Building a portal to the past

“The brand essence for Krispy Kreme is a good place to start in terms of how this campaign came about — which is joy,” says Tim. And while a tight budget can feel like a restrictive limitation for creative teams, this challenge pushed The Monkey’s to look for new opportunities outside of traditional media and create a multi-disciplinary, tactical approach within their smaller team. “Before we even started thinking of what this could end up as, the budget forced us to think alternatively to traditional media.”

The result? An immersive virtual arcade that ushers Millenials — and beyond — into the epoch of the 90s arcade mania from the comfort of their own phones. 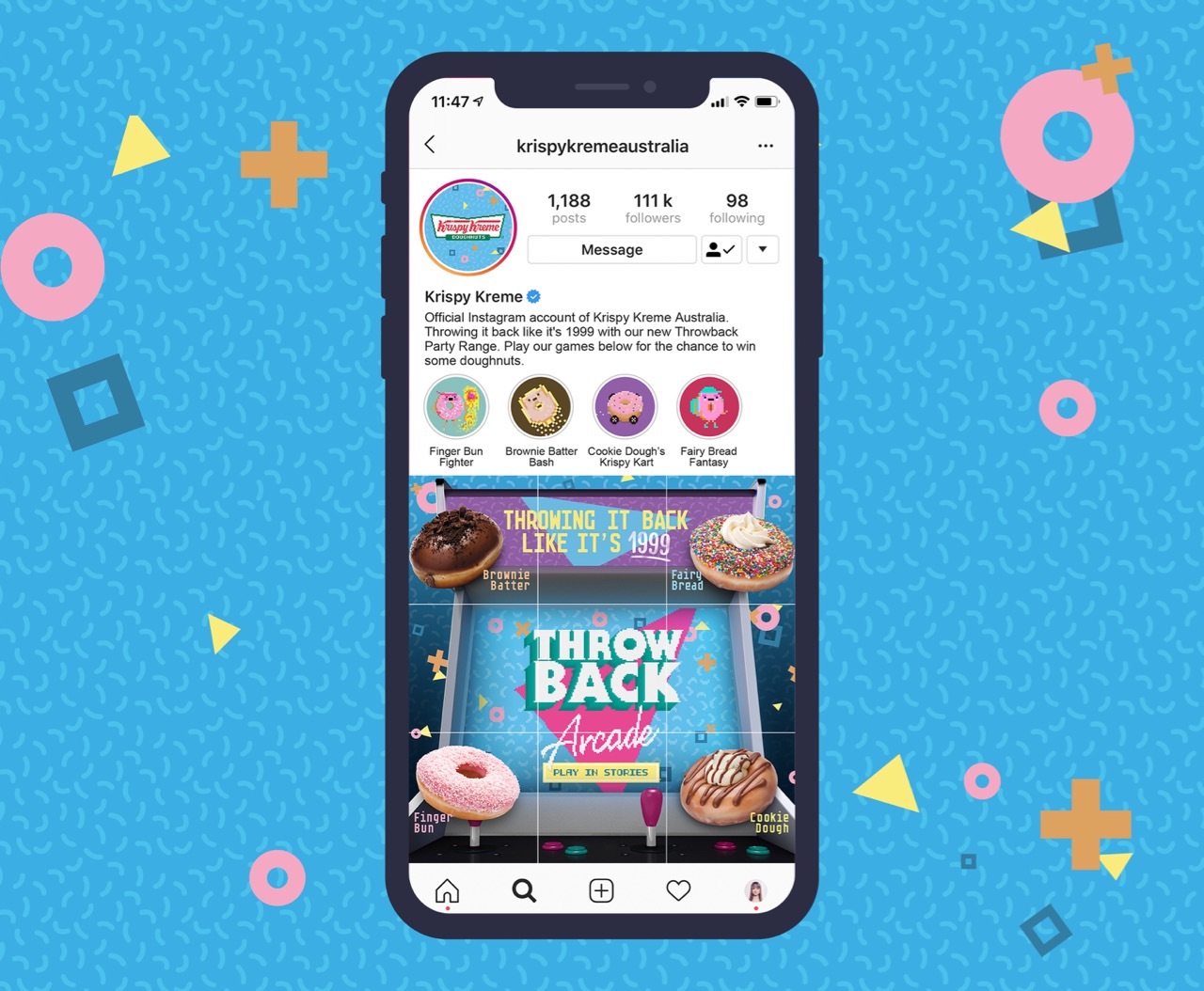 With a single swipe, the Krispy Kreme e-community was welcomed with a traditional handheld game-console screen that immediately set the scene for the fun that was about to take place. Greeted with 8-bit pixel art, sprinkle-clad fighter doughnuts, cookie-dough racetracks, and familiar game leaderboards, the product was successfully presented to Millennials as a taste of their childhood. “The games were technically hosted elsewhere, but we wanted the audience to feel as if they never left social media. Our developers worked hand-in-hand with the Facebook team to actually help that user journey be the best it could be and ensure that it made people feel like they were still within Instagram.” Says Tim. 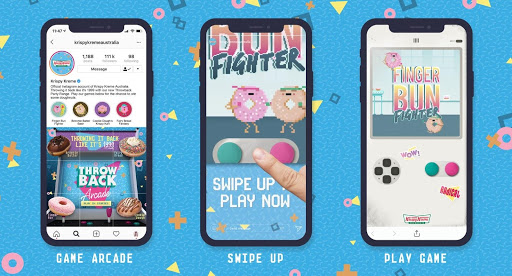 (Krispy Kreme’s Instagram account was turned into a virtual arcade, the games were accessed through Stories and people could play the games instantly)

While the idea required an adaptation of traditional branding guidelines, taking things a little more retro, the entire campaign was consistently driving back to the heart of the product. “Our designers did such a good job at centering the games around each of the products to make sure that they came through each time. And I suppose the products also acted as the foundation of key features throughout the game.”

The design also stayed at the centre of the development process to ensure a consistent narrative and user-experience. “We sat down as a project team, but had our visual designers heavily helping craft what’s happening throughout this game. What’s the narrative? What are the enemies that they have to overcome? It was very much them that helped bring the games to life,” says Tim.

To ensure the team stayed true to the brief, the entire team was also involved in the testing and feedback loop for each game. “We had a bunch of people across the agency network testing. That was a really important aspect. Again, ensuring that we were going back to the brief we had around nostalgia, is it actually working, and ensuring that even people that don’t like gaming, was this something that was equally as engaging as an experience for them.”

This idea of keeping the doughnut range front and centre also led to the creation of a GIPHY keyboard that audiences could easily access — amassing over 15 million uses and counting. “[We saw it as a] throwaway idea that proved to go gangbusters. Every time someone searches for Krispy Kreme anywhere in the world they see those GIFs. We’re still seeing them being used today on their Instagram Stories,” says Tim. Ollie is quick to jump in and share his love of the harmonious experience these GIFs provided alongside the campaign. “Yes, even if you didn’t know about the rest of the campaign, they look so awesomely native, it’s what you’re looking for when you’re looking for GIFs. So they’re brilliant.”

Smaller budgets and tighter timelines also meant that The Monkey’s team pivoted their traditional way of working and pulled from their own childhood memories to create an experience that truly transported audiences into 90s gamers, as opposed to feeling like a counterfeit attempt. “We worked as a project team with an agile process, which is particularly hard to do at an agency where you’ve got all these specialists working across specialisms from strategy to creative to our studio team and our production team,” reflects Tim. “The people that worked on it grew up through the eighties and nineties, and so could actually really strongly relate to the brief and put that into the actual production of the work.”

It also meant thinking of unique ways to bring their ideas into a reality. “The budget really made us think of something a bit more engaging and interactive, which led us down an experience path. It also led to some really creative thoughts where one of our developers even used his kids as sound effects throughout the game.”

Looking to the future of brand connections

With a 51% increase on website visits from mobile and a 30% increase in eCommerce sales, by tapping into the burgeoning trend of immersive experiences through the accessibility of social media, The Monkeys were able to harness Millennial memories as a unique way to influence their present purchasing and engagement behaviours. More than a simple product announcement, the Krispy Kreme community was given the gift of childhood joy.

The games also proved to be a welcome portal for Krispy Kreme to effectively interact with their global community during COVID-19, a use case that is likely to see uplift as social distancing requirements continue. “These games actually got released in multiple markets over COVID-19 as a way to actually engage with their audiences, knowing that they couldn’t push or drive them into store. COVID has made people more adaptable in terms of using those technologies at home,“ Tim reflects. 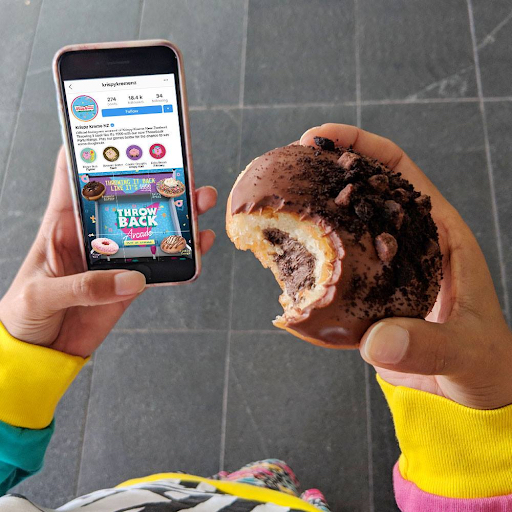 (The games have been adapted to other markets including New Zealand, UK and Ireland. image credit: Krispy Kreme New Zealand)

When musing on the future of immersive brand experiences Tim and Ollie forecast into the future with a buzzing sense of excitement. “I’d love to see the market push for more of a creative output in new spaces,“ says Tim. “I think this is going to become far more established in the next few years, especially with the likes of 5G and the hardware that people will be getting in their hands. It’d be very nice to see what alternative means could be created, that’s actually creating a really nice brand experience and isn’t just simply a message delivered to people.“

The Throwback Arcade games can be played on mobile devices here.