The Rainbow Effect: Amplifying Grassroots Culture – brought to you by Facebook Curated ANZ 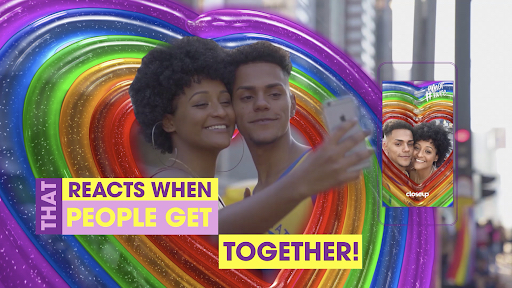 Google #AmorLivre on social media and you’ll find thousands of images of members of the LGBTQ and POC communities holding hands and locking lips.

The hashtag was created as a political expression in Brazil, a country where a recent survey found 40% of young people feel unable to express their sexuality (amor livre is Portuguese for free to love) and 50% have already hidden a relationship from their families.

Facebook Brazil creative strategist Steven ePonto was one of many people scrolling through the #AmorLivre feeds when an idea came to him for a campaign for Close-up, the toothpaste brand he had been engaged to work with.

“It seemed to us that we needed to get closer to this community,” says ePonto. “They are feeling oppressed inside their houses, out in society, everywhere. We thought ‘let’s talk about being free to love and stand for them beyond stereotypes by supporting an authentic movement that is already in the culture, rather than creating something ourselves’.”

The result was Close-up #AmorLivre, a user-generated content campaign turning selfies into multi-channel dynamic ads to increase awareness and brand favourability of the Unilever-owned toothpaste brand amongst millennials.

Launched during Sao Paulo’s Pride Parade, the largest in the world gathering more than three million people from across Brazil, the campaign gave the community an AR lens that reacts when people get together, activating a 3D rainbow love-heart around them. Via the dedicated Messenger bot, people were encouraged to submit their pictures of Amor Livre for real-time display on the digital outdoor surrounding the parade.

More than 200 emotive and uplifting technicolour ads were created automatically for digital outdoor, Facebook and Instagram, but the campaign’s true innovation was the way it tapped into authentic grassroots culture, creating a true exchange that reflected the reality of social diversity rather than taking the traditionally prescriptive top-down approach. 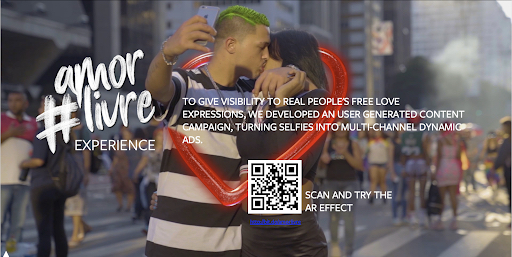 Giving a voice to grassroots culture

“Brands have a fundamental role and responsibility giving visibility to grassroots culture,” says Kevin David, creative director and co-founder of MOOC agency, who masterminded the campaign together with Facebook and Fbiz advertising agency.

“We (people) create culture, and brands broadcast it. I believe this is a great exchange and hope more brands embrace and contribute to it because this is the only way for us to build a truly authentic idea.”

Truly embracing diversity was at the core of the user-led campaign.

“There was a lot of resistance five years ago when we began talking about diversity: the industry was much more rigid,” says David. “But we’re now living in a moment where brands can’t avoid this anymore. There’s nowhere to hide. Brands have to talk about things they didn’t really want to address before, like diversity, inclusion, the place of a woman in a company, the place of a black person in a company, and of any person of colour in advertising and communications.” 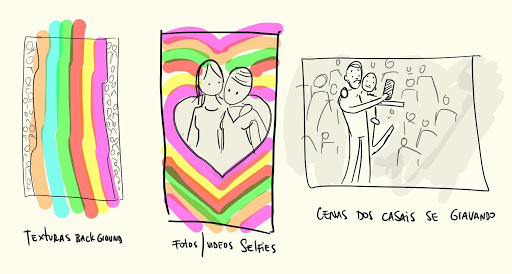 (Early sketches for the campaign imagining the AR effect and interactions)

In this respect the #AmorLivre campaign was a watershed moment and provides a beacon to other brands as to how to move forward with a more inclusive approach that amplifies authentic grassroots movements rather than broadcasting and ignoring social trends.

“There’s still a lot of hostility but we’re starting to break those barriers through dialogue,” says David. “It’s happening gradually and naturally and this conversation is the tool that will push us forward.”

Gradually was not a word that sprang to mind when the creatives pitched the idea to Unilever: the Pride Parade was just four weeks away.

“They got really excited and nervous because everything happened one month before the parade,” says ePonto. “But they were really engaged in understanding how they could tap into culture, and it was a great moment to do that.”

As an agency that specialises in youth culture and promoting diversity, MOOC was well equipped to do that, and took as its starting point the best way to give a voice to marginalised communities.

“It was not an idea that comes from ‘let’s make an AR filter, let’s make a bot.’ It really started from the necessity of how we could be relevant to this community and how we could best make that happen,” says ePonto.

“So you started from the core, from needing to connect to a cause,” says Creative Strategist at Facebook Carmela Soares. “How did you take the leap from there?”

“We began connecting all the relevant partners,” answers ePonto.

A team was assembled including More Than Real for AR Effect, Smarters for the chatbot, Bornlogic for the Dynamic Ads, IDEAFIXA for the design and then Kevin David personally scouting on the streets to connect with the communities they wanted to feature.

“We understood we couldn’t do it alone and one of the most exciting things for me was to cast different kinds of people, from bisexual couples to transgender and POC couples,” says David. “The context was about being alive and being alive was very political at that moment so it was a great moment to do something for this under-served community.”

That they did, with an inclusive and interactive platform that significantly boosted Close-up in the process. The campaign had a reach of 30 million people with a brand affinity lift 10 times higher than category norms and nine times higher than previous efforts. The user-facing bot received 30,000 messages including those from 13,000 unique users who helped generate 216,000 AR camera effect impressions and a conversion rate of 15.5 per cent (people who sent a photo to be featured). 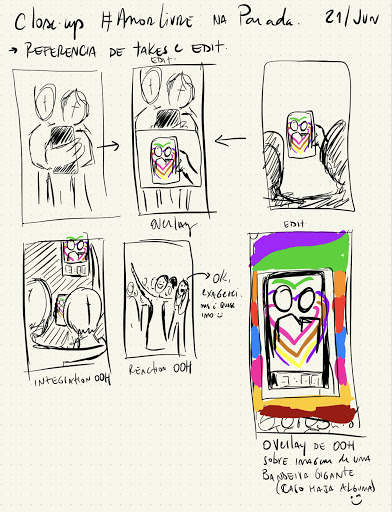 “You’re talking about a brand that has existed for over 30 years but somehow they reinvented themselves by following culture,” says Soares.

The results demonstrate not only the power of engaging with grassroots culture, but a way forward for the advertising industry.

“It’s incredibly important for brands and creators to achieve cultural impact based on a conversation everyone is having,” says David. “We need to have more transparent dialogue between brands (and people) because that’s the only way we can build effective transformation in communication.”