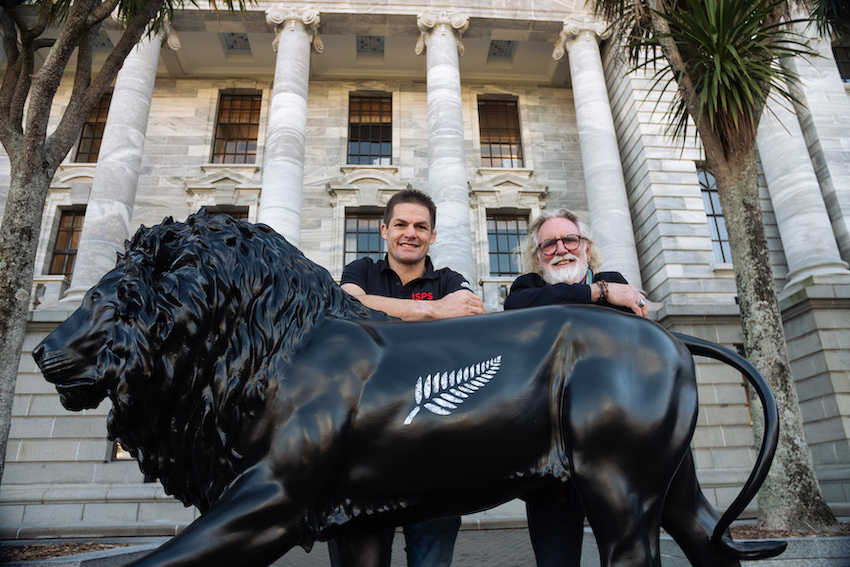 Special PR has helped deliver New Zealand news to the world as part of a multi-market initiative from conservation charity Tusk.

The charity, of which His Royal Highness Prince William is Patron, has launched the Tusk Lion Trail.

It features more than 45 life-sized lion sculptures onto the streets of iconic cities including Edinburgh, New York, London, Bristol, Nairobi, Sydney, and Wellington – with each sculpture created by an internationally recognised celebrity.

All Blacks legend Richie McCaw has teamed up with prominent artist Dick Frizzell to create a life-sized lion sculpture as part of New Zealand’s contribution to the global art campaign, conceptualizing a striking black lion, complete with silver fern.

The Lion has been installed on the forecourt of Parliament on World Lion Day where it will remain for the next six weeks.  New Zealand is the first country in the world to unveil its art piece, kicking off a series of activity from international cities.

Says Kelly Grindle, head of PR and influence at Special Group:  “We love tackling projects that have a sense of purpose at their heart so we jumped at this opportunity – when you include the high profile personalities from the worlds of government, sport and art we had a recipe for true global headlines.

“We’re proud to have played our part promoting the New Zealand lion, and have landed headlines both here and abroad.”

The population of African lions is estimated to have declined by as much as 50% over the last 25 years. There are now fewer wild lions left in the world than rhinos. Each sculpture will highlight the magnificence of lions, threats to their existence and the people and solutions working for their survival – raising awareness for conservation efforts across the world.

Says Richie McCaw: It’s a true honour to be part of this global campaign as an ISPS Handa Ambassador and ensure that New Zealand is represented on the world stage.  The conservation and environmental challenges we’re facing are daunting – and the work Tusk does to protect lion habitat and mitigate human-lion conflict is admirable.  I’d encourage anyone passionate about wildlife to pop down to see the sculpture at parliament, and better yet, register to bid at the global auction to own this incredible art piece from Dick Frizzell.

Says Frizzell:  “We really wanted New Zealand’s lion to pop on the world stage with our proud jet-black colouring and silver fern – and because we’re dealing with a British charity, I guess this is technically the closest you’ll see to a British & Irish Lion in the colours of Aotearoa.”

Says Charlie Mayhew MBE, chief executive of Tusk: “New Zealand has an incredible reputation on the world stage when it comes to conservation, environmentalism and sustainability.  We’re pleased to launch our very first fundraising efforts in New Zealand and believe everyday Kiwis will get behind our global rally-cry to save the African Lion.”

Following the worldwide exhibition of these one-of-a-kind art pieces, New Zealand’s lion will be auctioned off by leading global auction house Bonhams in London on November 9th.

Three years ago, Tusk raised $1.5 million NZD with its Rhino Trail and is hoping to surpass this total by taking the art installation global. Funds raised at the auction and through public donations will support the work of Tusk and its partners in protecting species and empowering communities across Africa.

More information about the event can be found here: www.tuskliontrail.com