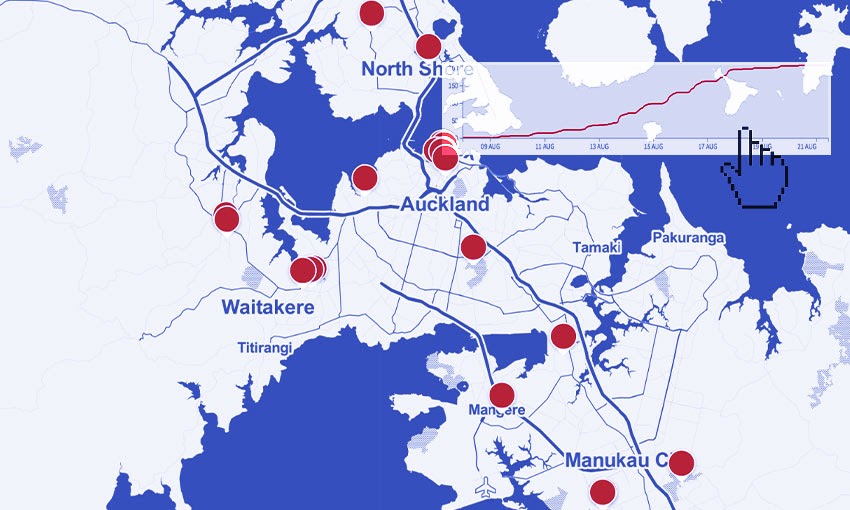 The Spinoff reached new highs in August, with visitor numbers soaring to a 12-month record, while the brand announces a clutch of new data, technology and editorial hires.

Many of those visitors came to see the site’s clear, concise coverage of the country’s latest Covid-19 lockdown, including live updates, and a constantly updated interactive map containing every location of interest that was viewed more than 500,000 times. As lockdowns continue into September, that, along with the rest of the site’s ongoing virus coverage, continues to rate well.

The map was created by former NZ Herald head of data journalism Harkanwal Singh, who just joined The Spinoff Group as its first head of data. He will work on projects for The Spinoff, along with Daylight Creative, the group’s new content studio. He is joined by former Vend head of engineering Ben Gracewood as The Spinoff Group’s first CTO, working on its technology, systems and tools, and Eli Rivera, internally promoted to head up its marketing.

The month’s other highlights include Sleep Week, a week-long celebration of everything that is slumber-inducing, coverage of New Zealand’s Olympic efforts, along with NZ on Air-funded video series in FIRST and Extremely Online, the latter created by Hex Work Productions for Shit You Should Care About, the global-from-Aotearoa Instagram news account with over 3.3m followers.

Says Duncan Greive, founder and CEO, The Spinoff Group:  “2021 has been a year like no other for The Spinoff Group. We’ve invested heavily across the organisation, and recruited a team which will allow us to fully embrace the opportunities in front of us.”

There are new editorial hires too, in Madeleine Holden, Dylan Reeve and Shanti Mathias, who join Josie Adams as the first recruits to IRL, a new editorial project for The Spinoff made possible by the Public Interest Journalism Fund. Holden comes to us from the popular US digital publication Mel, while Reeve is a longtime collaborator of David Farrier and Mathias a brilliant young feature writer. IRL will explore the real world impacts of technology and the internet in deeply reported and investigative work, and launches on Monday, September 13.

Adds Grieve: “These new appointments see The Spinoff revved up and running, with major technology hires complementing new writers and editors. We’re thrilled to have such strong, experienced additions to our team.”