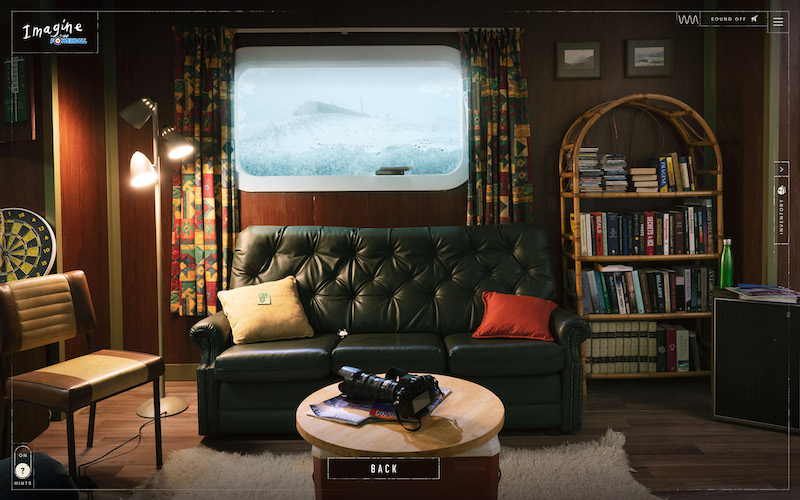 Last month, Lotto New Zealand left Kiwis in suspense, following a cliff-hanger ending to the latest iteration of its ‘Imagine’ series, On Ice. Now, Lotto NZ has revealed there is in fact an ending, but they won’t be giving it away easily – instead, it’s up to Kiwis to unlock it.

Launched today, the next phase of the campaign by DDB Aotearoa New Zealand follows the story’s central theme of prolonged anticipation. New Zealanders are encouraged to head to the website (Didtheywin.co.nz) to discover how to unlock the ending and be in the draw to win a share of $50,000 worth of prizes.

The interactive website allows people to explore the base where the four Antarctic researchers in the story spent the long winter – the difference is, now it’s the audience embarking on the research mission. Throughout the base, there are objects for people to interact with – some will help them unlock the ending, while others are items of interest that help paint a deeper picture of Antarctica.

In addition to the main prize for unlocking the ending, there are four other prizes to be won, each based on the dreams of each of the characters in the story.

This is the second time Lotto NZ and DDB Aotearoa have taken their highly anticipated campaigns beyond a single story through the integration of digital media. The previous iteration of Imagine, L05T, had audiences hunting for hidden Lotto numbers within the ad. This campaign takes the experience a step further, using the ad to lead Kiwis into an exciting digital experience.

Says Gary Steele, executive creative director, DDB Aotearoa: “The Imagine platform gives us the opportunity to get really creative, to produce something new and different with each iteration, capture the nation’s imagination and drive huge engagement and participation for Lotto NZ.

“By integrating an exciting and interactive digital experience into the campaign, we are able to heighten that anticipation, extend the life of the campaign and get Kiwis invested in the journey.”

Lotto NZ chief marketing officer Annemarie Browne says she continues to be excited by the ever evolving Imagine series and the ability for the digital component to take each iteration to a new level: “The Imagine series is all about allowing the nation to dream – it’s something that Kiwis can really connect with and feel inspired by. By integrating a digital experience into the campaign we’re able to continue each story, prolong the anticipation and give Kiwis more time to dream – and of course, the chance to win thousands of dollars.”

DDB Aotearoa launched the long running ‘Imagine’ campaign platform in 2015 with Pirate Ship, followed by the poignant Mum’s Wish in 2016, the award-winning Armoured Truck in 2018, L05T in 2019 and On Ice in August this year.

The second phase is now live at www.didtheywin.co.nz and is integrated with media extending across digital and social.