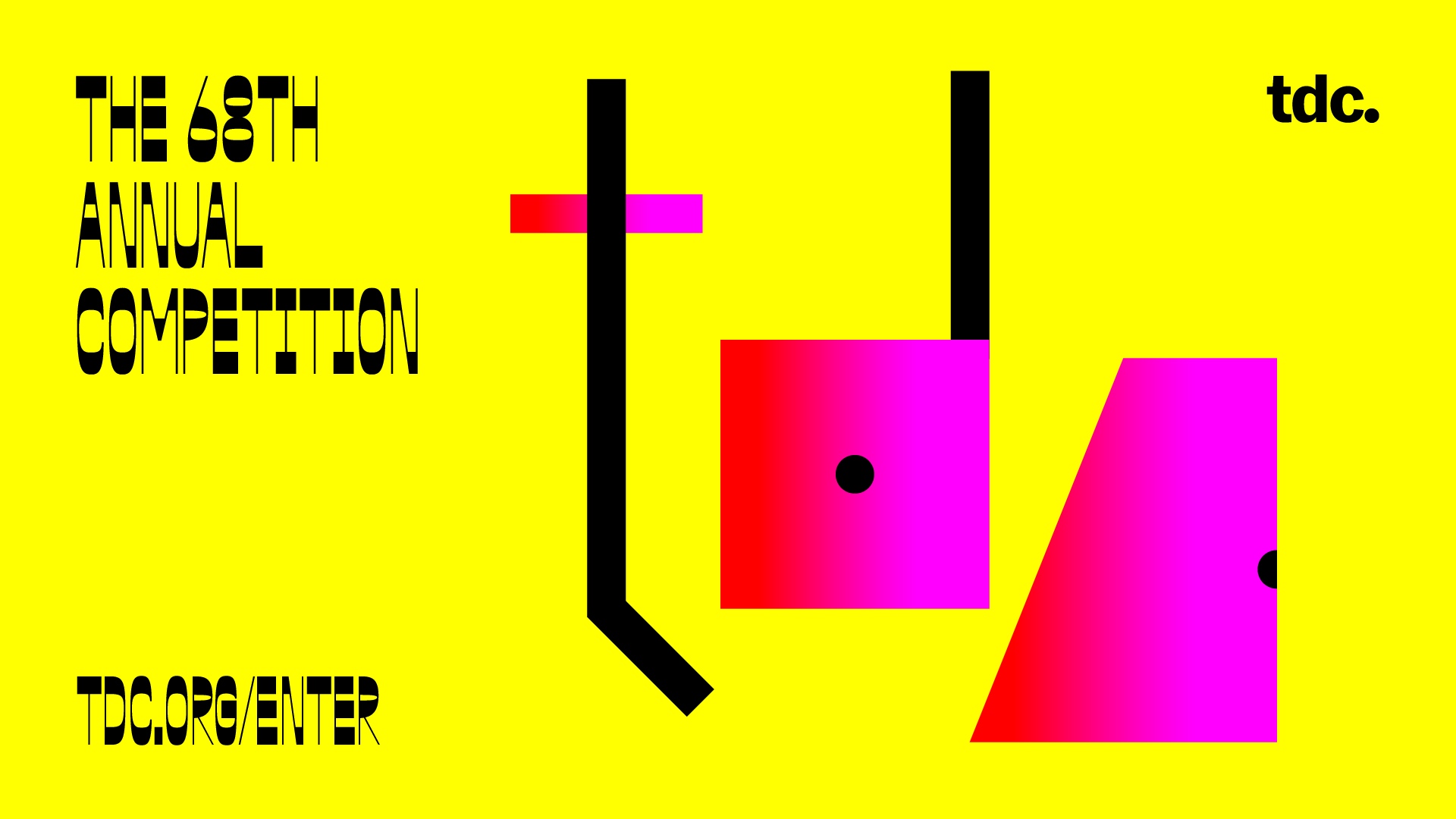 The Type Directors Club, the world’s leading typography organization and part of The One Club for Creativity, has opened the call for entries and announced juries for its two premiere global awards programs: TDC68 Communication Design and expanded 25TDC Typeface Design competitions.

TDC68 recognizes how letterforms are used, honoring typographic excellence and innovation along with the art and craft of typography and design.  25TDC focuses on how letterforms are drawn, and celebrates new typeface designs in non-Latin letterforms.  The competitions regularly receive entries from more than 60 countries.

To be eligible, work must have been produced or published in the 2021 calendar year.  Early bird deadline for entry is October 29, 2021, with final deadline December 17, 2021.  More details on both competitions can be found on the entry site.

This year’s awards competitions reflect TDC’s ongoing commitment to increase the level of diversity and representation in its juries, awards entries and general programming, as well as among TDC membership and on its Advisory Board.

Full juries for both competitions are as follows:

A highlight for this year is the expanded 25TDC Typeface Design competition, which for the first time includes dedicated categories and expert judges for Arabic, Indic, and Chinese/Japanese/Korean.  The competition has always accepted entries for those scripts; this expansion of dedicated categories and additional judges was prompted by the increased number of entries for these scripts in recent years.

Each of the script categories has three dedicated expert jury members, increasing the total number of 25TDC jurors from six to 14.  This represents the typeface design competition’s largest awards jury expansion in its 25-year history, a reflection of TDC’s mission to recognize and support the diverse global type design community.

In addition, an exciting change to TDC student entries will be announced shortly.

TDC68 and 25TDC winners receive a Certificate of Typographic Excellence and digital tag certifying their work is among the world’s best of the year.  Winning work will be featured in the highly respected TDC Annual, The World’s Best Typography, and showcased in eight  exhibitions that travels to museums, schools and design organizations around the world.  In the student categories, three students for TDC68 and one for 25TDC will win monetary awards.

This year’s call for entries is supported by a striking branding campaign designed by TDC member Tereza Bettinardi, based in São Paulo, which creatively explores the “counterspaces” or inner parts of letters.

Says Bettinard: “The design process started with one question: what if we expand the inner shapes of the letters to create new forms? As these small shapes expand and are used to create entirely new forms, at some point we end up also setting new rules to this infinite game.”

Bettinardi also brought warmth to the design system by using vibrant colors and gradients — a way to share a bit of her landscape — inspired by vernacular lettering and signs.

Explains Bettinard: “Living and working in Brazil, much of my practice was coined in dealing with restrictions, such as how to find drops of wonder even in the driest places. In this sense, you need to pay a lot of attention because every minor gesture counts. My team and I hope this campaign can ignite a conversation with the TDC community to keep expanding into and embracing more diverse perspectives.”

Typefaces for the campaign are Proxy by Commercial Type and ABC Laica by Dinamo, both of which were generously donated by the foundries.

Bettinardi was a two-time winner in last year’s TDC67 competition, receiving certificates for As Mulheres Contam on behalf of Carambaia in Books/Single, and Cursos E Oficinas for Sesc 24 de Maio in Miscellaneous/Campaigns.  She was also a featured speaker at TDC’s recent Type Drives Communities conference, where she talked about her pandemic book club project Clube do Livro do Design.

TDC is currently celebrating its 75th anniversary as an professional design organization, and its second year as part of The One Club for Creativity, the world’s foremost nonprofit whose mission is to support the global creative community.