Aucklanders deserve some good karma right now, and this week Auckland Transport launches its ‘good karma’ behaviour change campaign for drivers. The campaign, via independent agency FEDERATION, provides vital context for proposed speed changes in Auckland, helping drivers to understand the relationship between speed, and safe, liveable communities. Especially where there are pedestrians and people on bikes.

The campaign includes a 30 second film that will run across YouTube, TVNZ On Demand and Cinema, and also Auckland Transport’s social media channels. Additionally, radio advertisements and OOH placements will deliver the message in key locations with proximity to the speed limit changes.

Says FEDERATION Managing Partner Olly Boden: ‘’The campaign leverages the concept of karma to connect Aucklanders to the reality that calmer driving can avoid harmful consequences for both themselves and others. In this way, we can all contribute to safer, liveable communities for everyone – now and in the future.’

‘’By modelling the behaviour we want to encourage – good, safe driving – we hope to motivate drivers to make a conscious change towards a calmer, safer mindset when they’re behind the wheel.’’

Adds Chief Creative Officer Tony Clewett: “The creative idea leverages behavioural priming and nudging to influence drivers with the feel-good behaviour change message of ‘Drive calmer, spread good karma’. It gives a visual demonstration of how one person’s mood and actions can impact another person’s wellbeing, and how this ‘contagious’ behaviour applies to our driving. ‘Good’ drivers stick to safe speeds and help to spread positivity, both to other drivers and pedestrians.’’

Says Mark Sharman, Senior Marketing and Communications Specialist for Auckland Transport: “You and your loved ones are sometimes the ones in the car travelling just that bit too fast. Sometimes it’s pedestrians and people on bikes who are most at risk. Speed may not be the cause of every crash, but the greater the speed the more likely death or serious injury will be the outcome. A safe and appropriate speed limit is the difference between those we love walking away from a crash, or being carried away. We want Aucklanders to feel happy and proud about the positive influence they can have on keeping everyone safe on Auckland’s roads.”

Auckland Transport recognises that one death on the roads is one too many. In June 2020, after an extensive consultation exercise with members of the public, Auckland Transport changed the speed limit on over 600 roads in the region to help prevent death and serious injuries.

Auckland is a Vision Zero region, meaning Auckland Transport is committed to a goal of no deaths or serious injuries on Tamaki Makaurau roads by 2050. 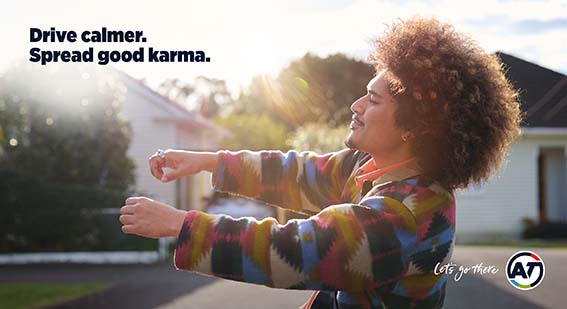