Whānau Ora has expanded the roll out of the ‘Fight for your Whakapapa’ vaccination campaign via Motion Sickness, across Te Ika-a-Maui, the North Island.

Launched in September, Fight For Your Whakapapa served as a call to arms across Tāmaki Makaurau, Auckland; an expansive initiative urging Māori to get vaccinated in the face of a growing outbreak. The initial campaign goal of 65,000 vaccinations through Te Whānau o Waipareira was smashed only weeks into the campaign, with over 112,000 shots already given across the wider Tāmaki Makaurau region.

Since the rollout of Fight For Your Whakapapa in Tāmaki Makaurau, vaccination uptake has increased in stunning fashion, doubling expected targets whilst only halfway into the campaign and culminating in the second highest total of shots given on the October 16th’s Super Saturday initiative. This overwhelmingly positive response led to the vast expansion of the Fight For Your Whakapapa campaign, taking it to communities far and wide across Te Ika-a-Maui. Whānau Ora has once again collaborated with New Zealand-owned ad agency Motion Sickness to create the North Island campaign.

With an extensive network of Whānau Ora partners spanning Te Ika-a-Maui, Whānau Ora has the in-depth capacity, capability and experience to provide whānau centric solutions and assistance when it comes to getting vaccinated. This deeply ingrained level of trust with whānau provides a strong human element to the vaccination push.

Says Kātene Durie-Doherty, media coordinator, Te Whānau o Waipareira: “Working with our leadership on the ground – it is their voice, their stories, their faith and belief in their communities that see our people rise up to the call to action to vaccinate. Fight for your whakapapa enables our Whānau Ora communities to own it and co-design something that is truly reflective of their communities, their people, Their voice. We are proud to build a platform that all brands and organisations can plug into.

Says Sam Stuchbury, executive creative director, Motion Sickness: “Feedback from the ground was there was a real lack of resonance from Māori in relation to the government’s vaccination comms. This informed the grounded approach of the expanded campaign; that looked to focus on local Māori leadership, and highlight their reasons for getting vaccinated. Over 50 Māori leaders from around the North Island were photographed, with some filmed. Time is of the essence to reach the 90% vaccination target; the campaign is now live, just 10 days after receiving funding.” 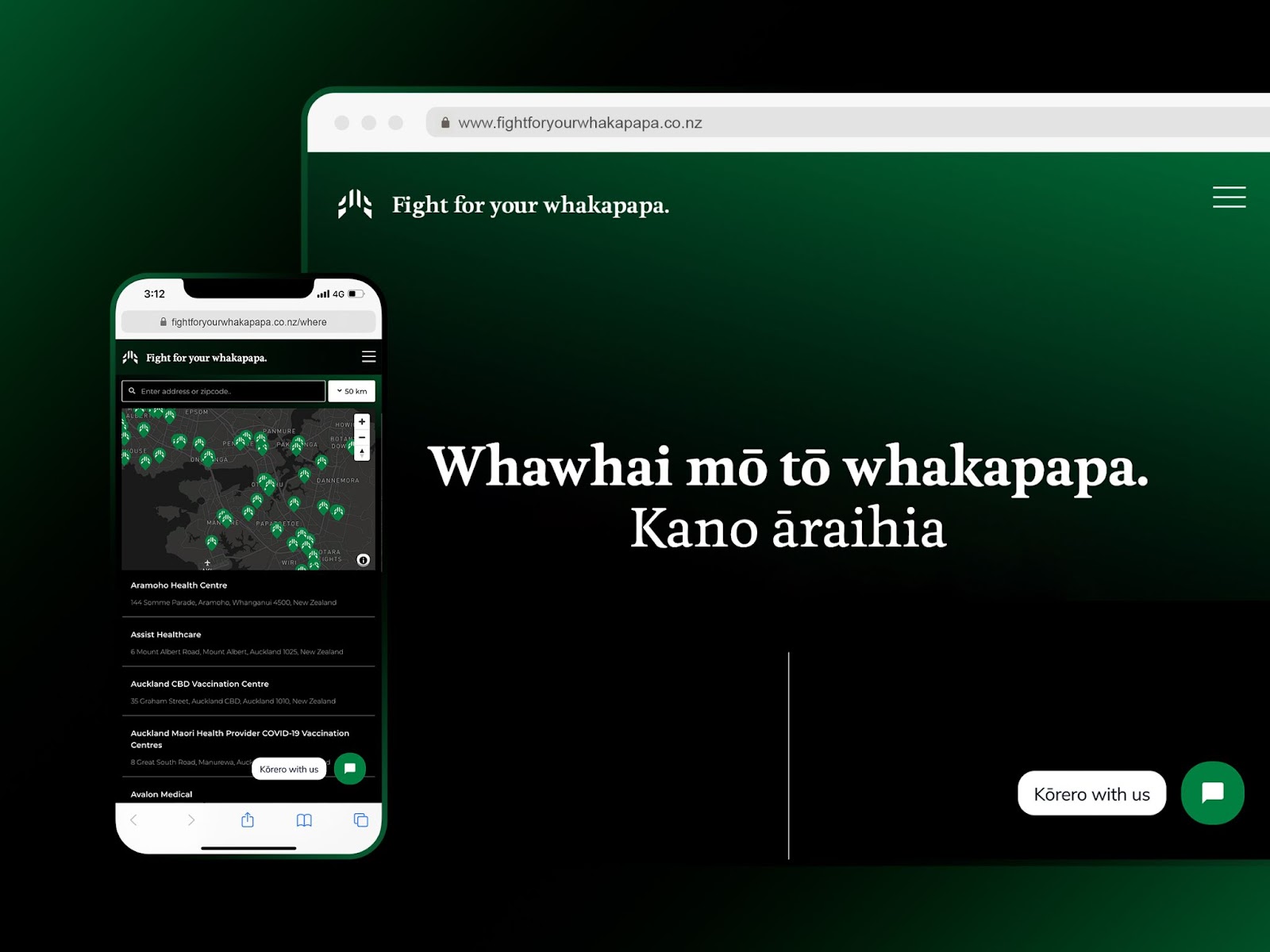 In addition to the Te Ika-a-Maui rollout of billboards, street posters, and strategically targeted digital and social media messaging, whānau are now able to correspond with the Whānau Ora team in real time, via fightforyourwhakapapa.co.nz – and be directed towards their nearest vaccination centers using live interactive maps.

Merepeka Raukawa-Tait: “Whānau Ora serve the most vulnerable communities and this means moving with speed, so to scale up defending our whānau and increasing vaccinations in our communities. It’s a race against time and a response we cannot do alone. This campaign reflects not only the communities Whānau Ora serves but the foundations Whānau Ora builds on; Only we have our own our solutions, Only we can bring our own solutions.”

When the campaign first launched in Tāmaki Makaurau, the use of a comprehensive targeting strategy was crucial in getting people to vaccination centers. Mobile ads were seen over 15,000 times, and with those devices later being located at Māori-run Auckland vaccination centers, the Tāmaki Makarau digital campaign was clearly proving effective.

The solutions required for Tāmaki Makaurau differ considerably when speaking to the wider North Island in this new phase of the campaign, particularly rural and regional communities. Namely, challenges around geographical proximity to vaccination clinics, digital/mobile penetration and media infrastructure, as well as limited covid-visibility in certain communities, which invites vaccine complacency. The core strategic motivation of Fight For Your Whakapapa moving forward is to ensure it comes from a ground up model, builds trust and resonance via local leaders, on-the-ground as ambassadors for the campaign.

Fight For Your Whakapapa is now live across Te Ika-a-Maui and will be running into mid December with the aim to reach a 80-90% Maori vaccination rate by March 2022.