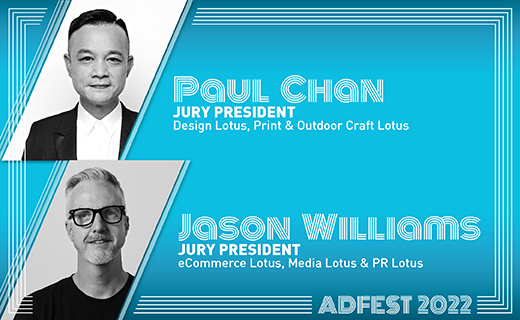 ADFEST is pleased to confirm that Jason Williams of Leo Burnett Australia and Paul Chan of Cheil Hong Kong will join its ADFEST 2022 Jury Presidents line-up.

Chan will chair the juries for the Design Lotus, and Print and Outdoor Craft Lotus, and Williams will oversee the eCommerce Lotus, Media Lotus, and PR Lotus categories.

Jason Williams is Chief Creative Officer of Leo Burnett Australia, an agency that is recognised for its entrepreneurial culture, innovative and behaviour changing creativity. He’s been behind innovate projects such as Suncorp One House, Reword, #MyFamilyCan and BYO Cup Day. Over the past 5 years he has won hundreds of international and regional awards transforming Leo Burnett Australia into one of the world’s most creative agencies. He has amassed over 80 ADFEST awards to date, most recently winning the Grande for Humanity at ADFEST 2021 for Bonds Out Now.

“It’s a privilege to be Jury President at ADFEST 2022. ADFEST is an award show known for its celebration of local flavour and uniqueness. I can’t wait to see the innovations, ideas and stories that will open our eyes,” says Williams.

ADFEST is one of only eight regional festivals included in the WARC Rankings, successor to The Gunn Report.

“ADFEST is one of the most respected award shows in the region. So it’s an honour to be Jury President, especially in a year when we have sadly lost co-founder, friend and one the industry greats, Jimmy Lam. I look forward to meeting my fellow jury members and celebrating those rare, fresh ideas that force their way to the top. For Jimmy.” says Chan.