“We’re For Moving With The Times”. This is the new theme of a major brand reset for Z Energy (Z) out of Saatchi & Saatchi.

The idea is designed to reflect both the way Z moves with the time of the day at a retail store level but also, holistically is moving as an organisation with society and culture. The brand platform doubles down on the ‘Z is for New Zealand’ tagline first launched over a decade ago.

Says Debbie Byrom, head of brand and marcomms at Z: “Z was launched in 2010 with a clear point of view on the world and an ambition. We had some great successes as a brand over the last decade, but we also got distracted by competition and short-term tactics. This reset moment is us getting back to who we are and looking to create our future, one that may look quite different from the present.”

A full page print launch advertisement reads “We’re in the Business of Getting Out of the Petrol Business” and talks to Z’s ambition to move to cleaner energies. It explains it’s a journey they have already begun in several ways.

The film elements of the campaign feature a catchy new song called “That’s Where I’ll Be” from Māori artist Rob Ruha. The bilingual waiata was written by Ruha set for release April 2022. It draws on his personal experiences living on the East Cape and his optimistic feelings about a moving Aotearoa. Rob says that what drew him to being involved was the chance to increase the visibility of te reo Māori, tikanga Māori & waiata Māori. It was also the kaupapa, the spirit and progressive intention of the project and Z’s commitment to a future Aotearoa society, to sustainability and manaaki tāngata. 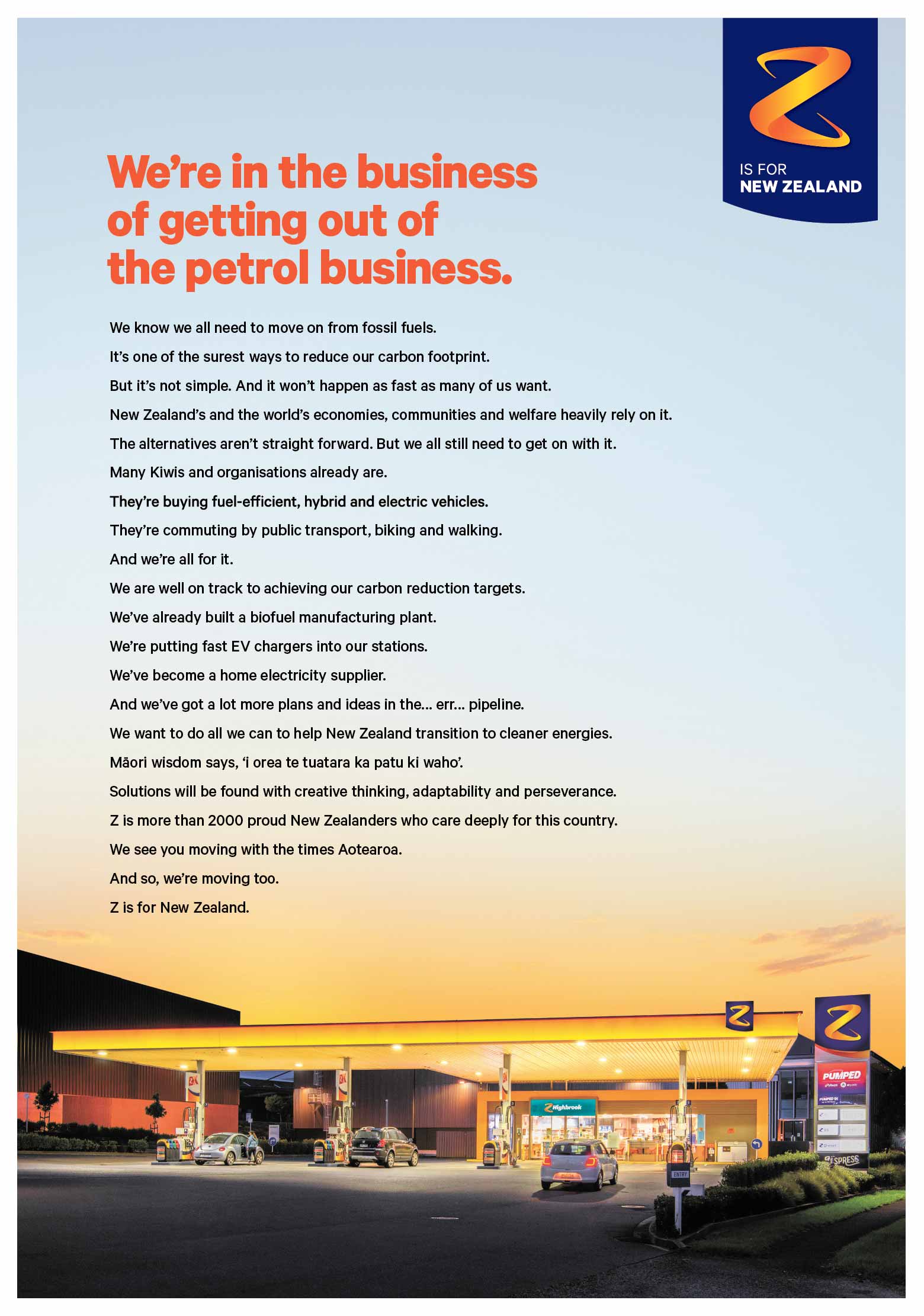 Says Steve Cochran, CCO, Saatchi & Saatchi: “Having Rob agree to collaborate with us was not just a coup, it was an honour. We had called this project Moving Waiata from the outset, so it always demanded a great song. As a respected contemporary artist and voice within modern Aotearoa we were privileged to have him involved. At the first listen of the waiata we all seriously got the feels. Rather than hearing commissioned ad music it truly felt like we were listening to a hit song. One that couldn’t be from anywhere but here. It could be a new Kiwi classic, we think it’s that good.

In the 60 second brand film you see a tapestry of New Zealanders going about their lives as if observed from a passing vehicle. At face value the scenes look quite every day, but each of them has its own story of a moving New Zealand. And although the work has a strong Māori influence in its creation, it also embraces the diversity of Aotearoa today with people of numerous ethnicities featured. A series of shorter length product ads, OOH and online executions utilise the stories within individual scenes.

The film was shot by Māori director Ray Edwards through Collider, who brought his own kaupapa to the project. Many of his production crew were Māori and te reo was widely spoken on set.

Says Edwards: “Collaboration is an integral part of Māori culture and this project had a very unique collaborative nature.”

Adds Cochran: “Getting people involved in a project with an energy company that openly acknowledges their contribution to climate issues required some frank conversations. Before he would agree, Rob Ruha delved deep into what Z say and do, including a very honest korero with Z Energy CEO, Mike Bennetts. But in the end it comes down to recognising we are all part of the problem and that we can all choose to be part of the solution.”

Says Mike Bennetts, CEO of Z Energy: “This is about creating a better Aotearoa, and as a brand that has always been for and always will be for New Zealand, we genuinely plan to play a major role in that.”