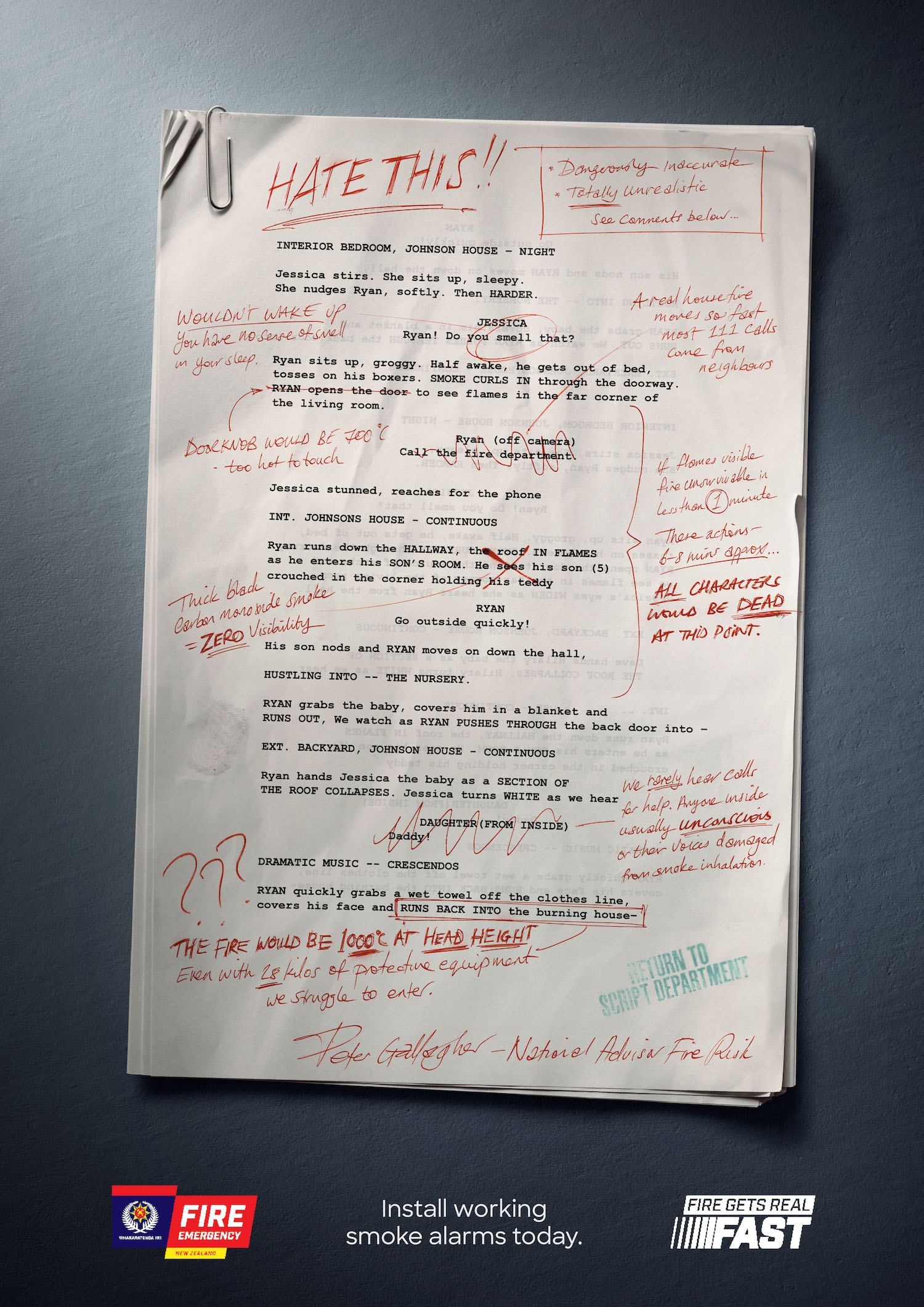 This campaign used real life firefighters to challenge Hollywood’s dangerous portrayals of house fires, tell the confronting truth of their experience and encourage the public to rethink their household’s fire safety.

The dwell time of press was our opportunity to expand on all the chilling detail of the realities of fire, set against the most relevant backdrop for the campaign thought. A Hollywood movie script.

So to make the idea work hardest we took the thought everywhere the movies were. Movie style posters inside cinemas, warnings before screenings of fire movies and our TVC played on New Zealand’s largest movie on demand platform, Neon. A New Zealand first.

PAK’nSAVE: Spendy Ad Blocker
FCB New Zealand
Christmas is an expensive time of the year. Retailers bombard people with ads to get them to spend money. Stickman is the low cost front man for Pak n Save, New Zealand’s low-price supermarket.

He’s always trying to help Kiwis save money. And poke fun at his expensive competitor, Countdown. This Christmas he came up with a low cost way to protect Kiwis from an entire ad break.

Fire and Emergency New Zealand: Escape the Paper
FCB New Zealand
1 in 4 New Zealanders will experience a house fire.
It can take less than 3 minutes for a fire to become fatal but only 62% of New Zealand households have an escape plan.

So we brought the trauma and disorientation of escaping a house fire to life in print by sending the reader on a journey through the newspaper. They followed the story of someone trying to escape a house fire over 4 separate ad placements. Like a real house fire where there is no escape plan, it had a tragic ending.

Agency’s 30 year plan to reach zero deaths on our roads.

The film visualises the ‘road toll’ – imagining it as a booth, operated by a mysterious woman who randomly takes life as payment from motorists. In this case, the driver’s young daughter.

The execution was horrifying without being graphic. It deliberately didn’t show a crash or even a cause. These were just some of the ways the film differed from previous road safety work.

Testicular Cancer New Zealand: Remundies
FCB New Zealand
Testicular Cancer is the most common cancer for Kiwi men between 18-35. But it’s easy to prevent if it’s found early with a simple monthly self-check. So, Testicular Cancer New Zealand wanted to help remind young guys to check themselves. But not just once, we had to do it every month. All while raisingmuch-needed funding, not spending it. So, regular advertising just wasn’t going to work. We needed to insert ourselves into the daily routines of young men and we did it by getting into their underwear drawers. We teamed up with undie experts Jockey, to create the world’s first pair of texting reminder undies: “Remundies”.

The deadline for Campaign Brief’s The Work 2022 is Monday May 2. Entries are FREE with only an acceptance fee charged for those that make the cut. See full details and enter here… If your agency has entered The Work and would like to showcase your best work in our Contenders series email ricki@campaignbrief.com.