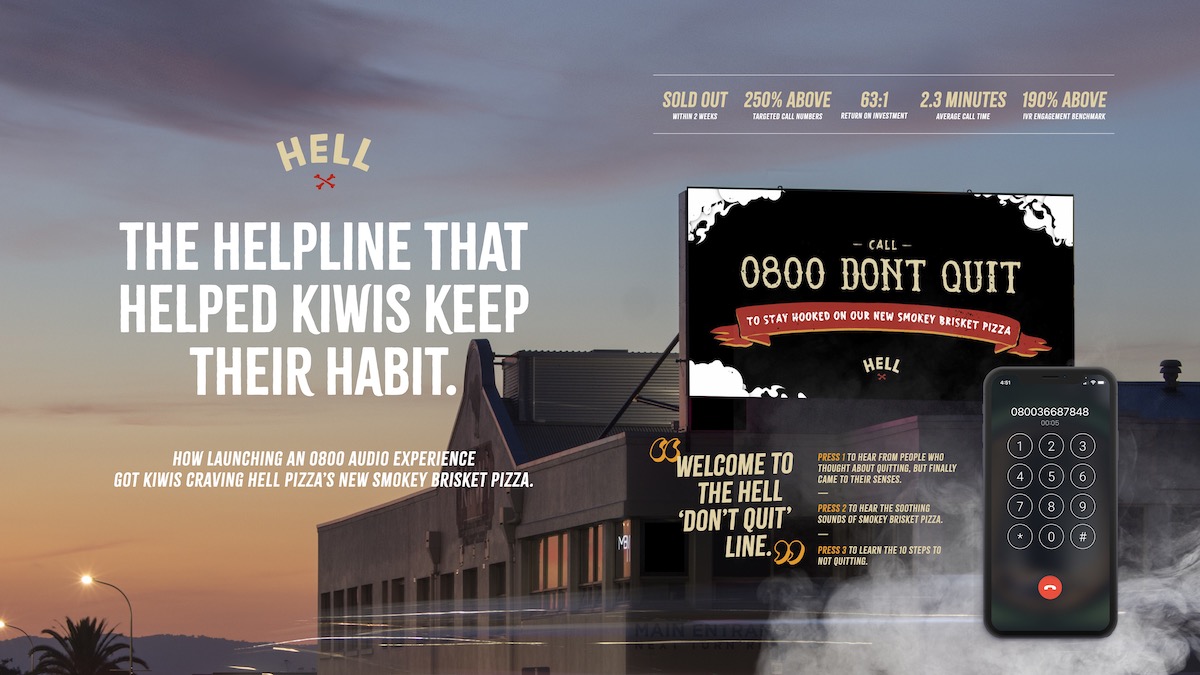 Unlike the infuriating automated experience you may expect from a traditional 0800 number, we transformed this unlikely medium into some light-hearted branded entertainment, serving callers up with an audio sensory experience that overloaded their ear drums with reasons to order the new smokey pizza.

Turns out, Kiwis do still have a smoke problem as the 0800 helpline was overwhelmed with calls, resulting in the new pizza selling out like they were cigarettes back in the 50s. 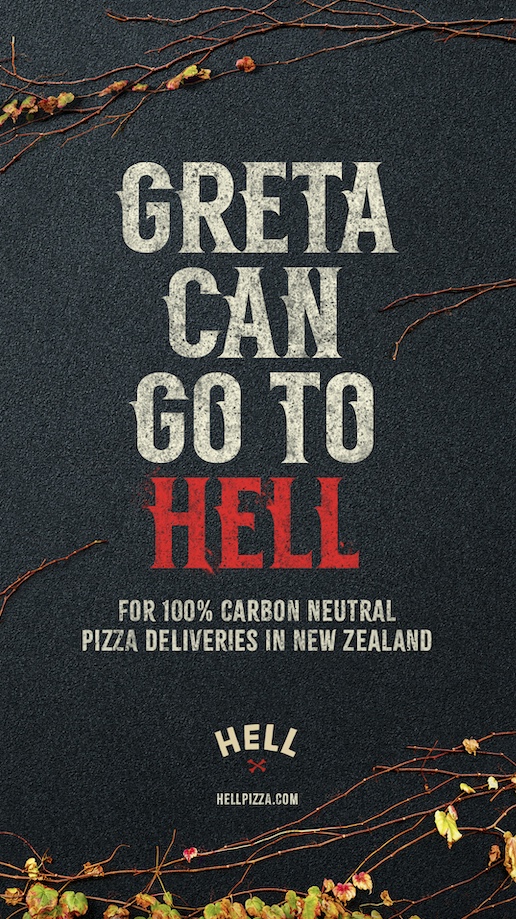 Hell Pizza: Greta
Yarn
A few days after environmental activist, Greta Thunberg, hit out at New Zealand and Prime Minister Jacinda Ardern for “not doing anything” to tackle the climate crisis, we launched an outdoor campaign in Thunberg’s hometown of Stockholm, Sweden.

This topical opportunity gave Hell Pizza a platform to highlight their 100% carbon neutral delivery service and wider sustainability plan, which we knew Greta would be a fan of.

Despite the ad initially being banned from a Swedish media company, the campaign went on to attract news headlines throughout the world, including Sweden, UK, USA, India, Poland, Vietnam, Australia and most importantly, New Zealand. 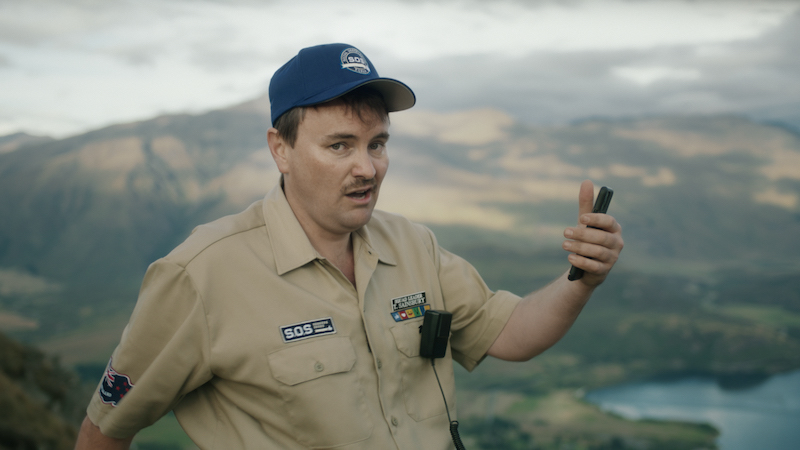 Tourism New Zealand: Social Influence
Yarn
With our borders firmly shut due to Covid-19, domestic travel has been vital in closing the $12.9 billion gap left from international visitors.

But unlike our adventurous visitors from overseas, many NZers were visiting the same well-known tourism destinations in pursuit of taking the same influencer-style photos.

Something which left our regions struggling and our social feeds all looking, well… the same. One mountain summit in particular is now tagged with over 70,000 almost identical photos.

So to encourage NZers to explore more of our country and entice others to do the same through their social photos, we launched a campaign asking the nation to stop travelling under the “social influence” and share something new. 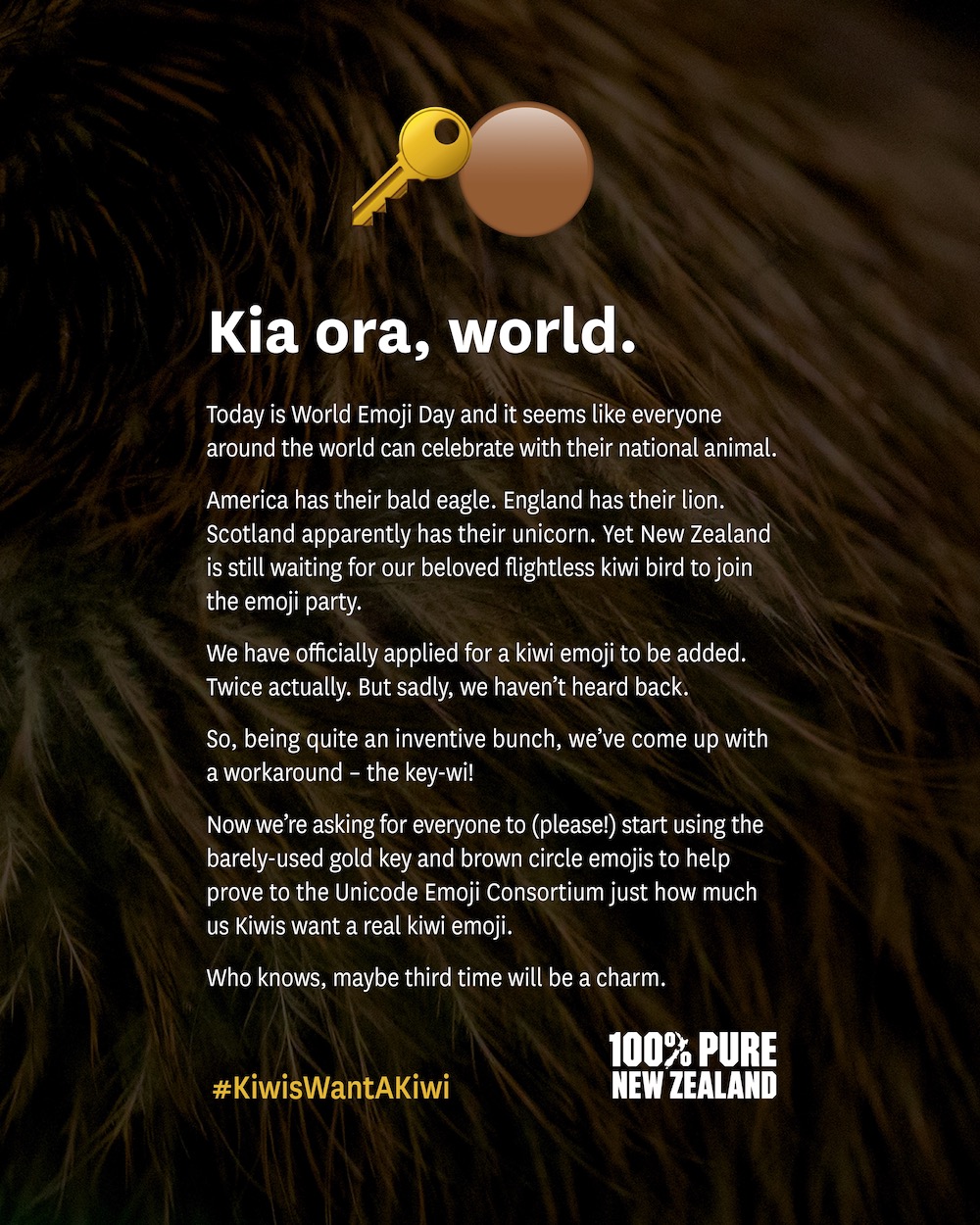 Tourism New Zealand: Key-wi Emoji
Yarn
While most nations have their national animal immortalised on the emoji keyboard, New Zealand continues to wait for our beloved flightless bird to make the cut after a few
unsuccessful applications.

So on World Emoji Day (July 17), Tourism NZ posted a simple open letter on social media urging fans of NZ to prove to Unicode that the kiwi bird deserves its rightful place on the esteemed emoji keyboard.

This was the gold key and brown circle emoji’s most famed moment in history as they made national and international headlines and flooded social media with thousands of NZers and overseas fans proudly declaring their love for our country and support for our little beaked emoji.

The deadline for Campaign Brief’s The Work 2022 is Monday May 2. Entries are FREE with only an acceptance fee charged for those that make the cut. See full details and enter here… If your agency has entered The Work and would like to showcase your best work in our Contenders series email ricki@campaignbrief.com.